Why Your Next Great Bargain Isn’t in the S&P

There is no question that the economy is in a far worse place today than it was a year ago. The numbers we are seeing are beyond belief…

Gross domestic product estimates from analysts for the second quarter range from horrifying (down 20%) to catastrophic (down 40%). Oil is selling for less than $10 per barrel.

Unemployment is projected to hit 32%, which is worse than it was at the peak of the Great Depression.

It really is terrifying economic data.

But against the economic nightmare that the country is now facing, amazingly, the S&P 500 Index hasn’t dropped over the past year. Instead, it is basically flat with where it was a year ago despite the terrible economic numbers. 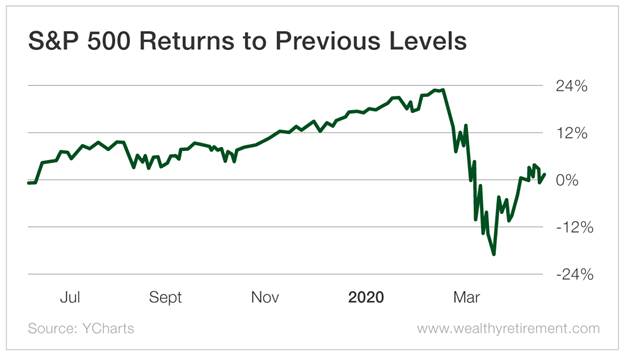 That definitely requires some further digging.

When the talking heads on the financial networks refer to “the market,” what they are referring to is the S&P 500.

The S&P 500 consists of 500 of the largest companies listed on American stock exchanges. Because it is spread across 500 different large companies, the S&P 500 is considered to be the single best representation of the entire U.S. stock market and U.S. economy.

Maybe that was true once, but in my opinion, it isn’t true today.

Many people will assume that because the S&P 500 Index consists of 500 different companies, it is split equally across them.

The weighting of the 500 companies in the S&P 500 is determined by their market capitalizations (share price multiplied by share count). That means the larger companies get bigger percentage weightings in the index.

That market cap weighting makes it so the S&P 500 is not nearly as diversified as the “500” its name suggests.

Let me give you an example…

Microsoft (Nasdaq: MSFT) is currently the largest-weighted stock in the S&P 500. It makes up 5.62% of the index. At that weighting, Microsoft has the same total weighting in the index as the combined weighting of the 183 stocks that have the smallest weightings.

Yes, one stock gets the same weighting as the combined weighting of 183 of the others in the S&P 500.

That doesn’t sound so diversified, does it?

The fact that the S&P 500 is market cap-weighted is not new. What is new is just how concentrated the S&P 500 has become in its top five weighted stocks. 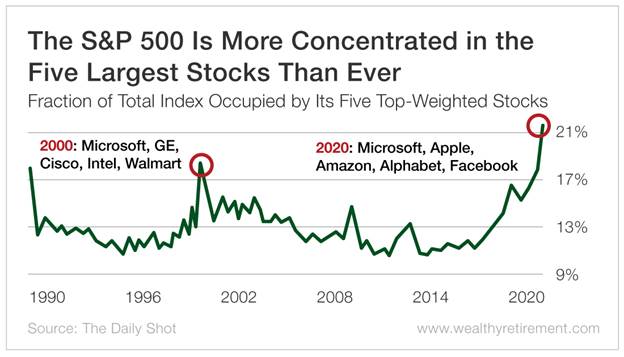 Historically, the five top-weighted stocks in the S&P 500 have made up 10% to 13% of the index. Today, the combined weighting of the top five has soared to closer to 25% and keeps climbing as Microsoft, Apple, Amazon, Alphabet (Nasdaq: GOOGL) and Facebook (Nasdaq: FB) get bigger and bigger.

This concentration has made it so that the S&P 500 does not represent a widely diversified way for investors to get exposure to the American stock market and economy.

Instead, the S&P 500 represents a relatively concentrated bet on the big tech companies that have come to dominate the world.

The American economy has tanked, yet the stock market isn’t even down year over year.

Given that I’ve just shown you that the S&P 500 Index is heavily concentrated in the largest tech names, you probably suspect why. 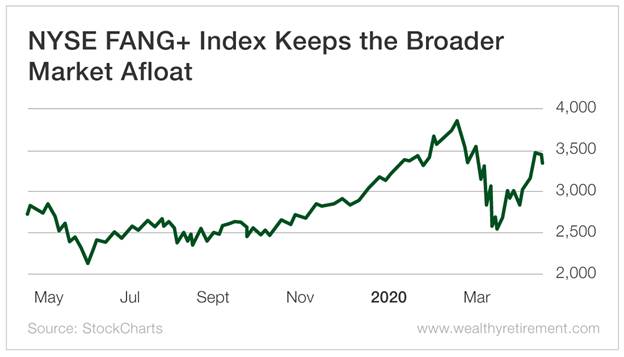 These FANG+ stocks that have come to dominate the makeup of the S&P 500 Index are the reason that “the market” has not declined over the past year despite the economy collapsing.

This is important for investors to be aware of because there are some terrific bargains in the stock market today, but investors may need to dig deeper than the tech-dominated S&P 500 to find them.

There are world-class companies outside of the FANG+ group of tech stocks that have deeply depressed stock prices.

So stay tuned – early next week, I’m going to point you toward the specific sectors that I think represent the most compelling places to find bargains today. This is where we will find great companies at great prices.

Buying opportunities like this come around only once a decade, and as investors, we need to take advantage.