You’ve probably seen this chart before.

As of this writing, the S&P 500 is up more than 25% for the year, meaning it’s been a banner year for U.S. stocks – especially for index investors.

Now look at this chart.

It isn’t nearly as popular as the chart of the S&P 500’s performance, but the breakdown of sector weightings in the index is arguably more important.

This chart shows how much impact (or influence) each sector has on the overall index. And right now, information technology’s influence over the S&P 500 is larger than the five smallest sectors combined.

Even so, it’s still well above its historic average of around 16%, according to Bespoke Research.

But wait… it’s actually even worse than those numbers suggest.

Look at this table. 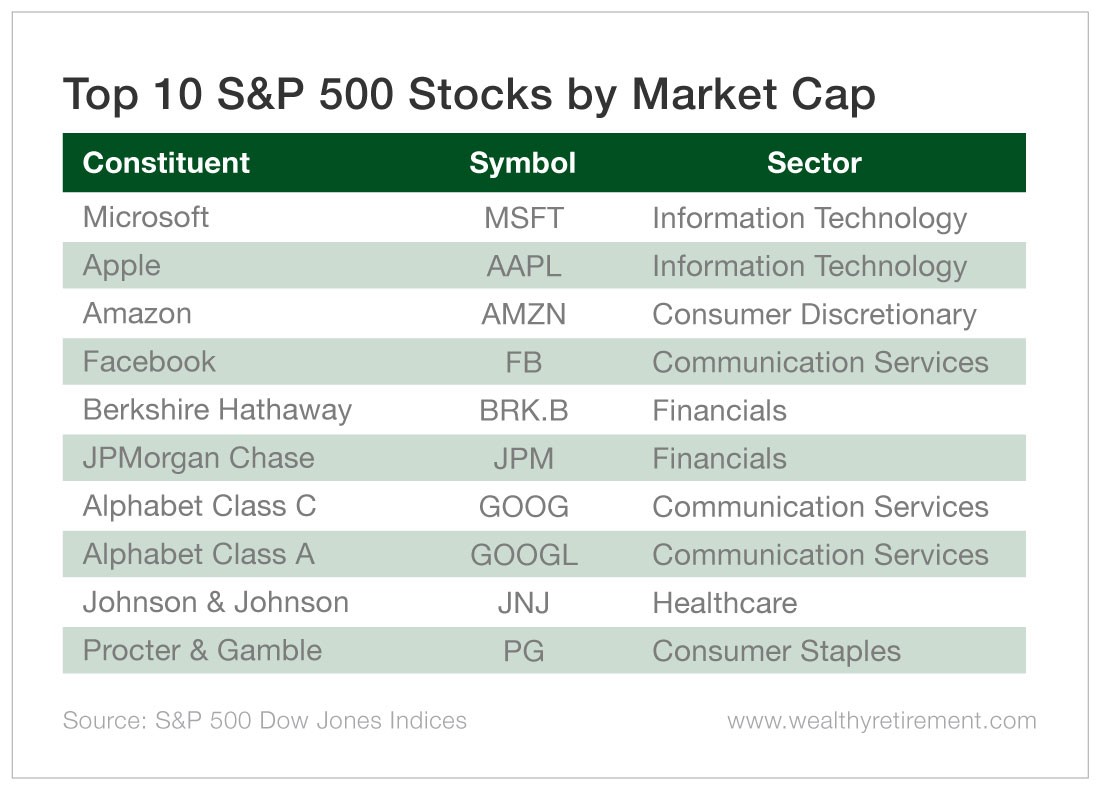 The S&P 500 is weighted by market cap, unlike the Dow Jones Industrial Average, which is point-weighted.

Now back the list. By S&P’s strange definition, there are only two information technology companies in the top 10: Microsoft (Nasdaq: MSFT) and Apple (Nasdaq: AAPL).

But common sense tells you the top four – and six out of the top 10 largest stocks in the S&P 500 – are “technology” stocks.

To be clear, I’m not saying tech stocks are heading for a fall. In fact, the market – led by technology – looks poised to continue higher for the foreseeable future, and it might even rise significantly if everything falls into place.

(Say, for example, President Trump and China’s President Xi announce a comprehensive trade deal and the global economy starts catching up to the U.S.)

But history shows that whenever one sector has such outsized influence on the broader market, bad things tend to happen.

The point of all this is to make sure you know what you own.

Index investing has been hugely beneficial to investors. Index funds give people access to the market at much lower costs than mutual funds, and they alleviate the burden of having to choose one stock over another.

Stock picking is not for everyone, especially people new to investing.

For the vast majority of people, index funds are just a better choice. That is why Vanguard’s assets under management have grown to more than $5.6 trillion today versus just $1 trillion in 2010.

There really has been a revolution in index investing, and Vanguard has led the way. But every revolution has collateral damage.

One of the unintended consequences of the trend toward index investing is that many people have been lulled into a false sense of diversification.

“Just” owning an S&P 500 index means that yes, you own a slice of all 500 stocks – but those stocks are not created equally. At least not when it comes to their impact on your portfolio.

And again, right now the market will go up or down largely based on where the biggest technology stocks go.

If you’re comfortable with that, great. Just know you’re making a big bet on big technology as an investor in S&P 500 index funds.

My advice: Use the end of the year as an opportunity to rebalance your portfolio. If you’re an index investor, make sure you’re really diversified by owning a variety of index funds that focus on different asset classes.

Check out Chief Investment Strategist Alexander Green’s Gone Fishin’ Portfolio for an example – and a time-tested playbook – for how to do this.

Aaron Task is an expert writer and researcher who formerly served as editor-in-chief at Yahoo Finance, digital editor of Fortune and executive editor and San Francisco bureau chief of TheStreet.com. Click here for his full bio.