Dogecoin has been a major story of 2021.

“Mania” might be a better word to describe it…

On May 6, I wrote to you and told you what I thought of this mania…

I said, “Dogecoin will end badly for people risking their hard-earned money on something that I don’t feel ‘speculative’ comes close to describing.”

My message to readers was to stay far away.

Fast-forward just more than two months later, and the price of Dogecoin has done exactly as expected: It collapsed.

Since then, Dogecoin has dropped by almost 70%, losing more than two-thirds of its trading price. 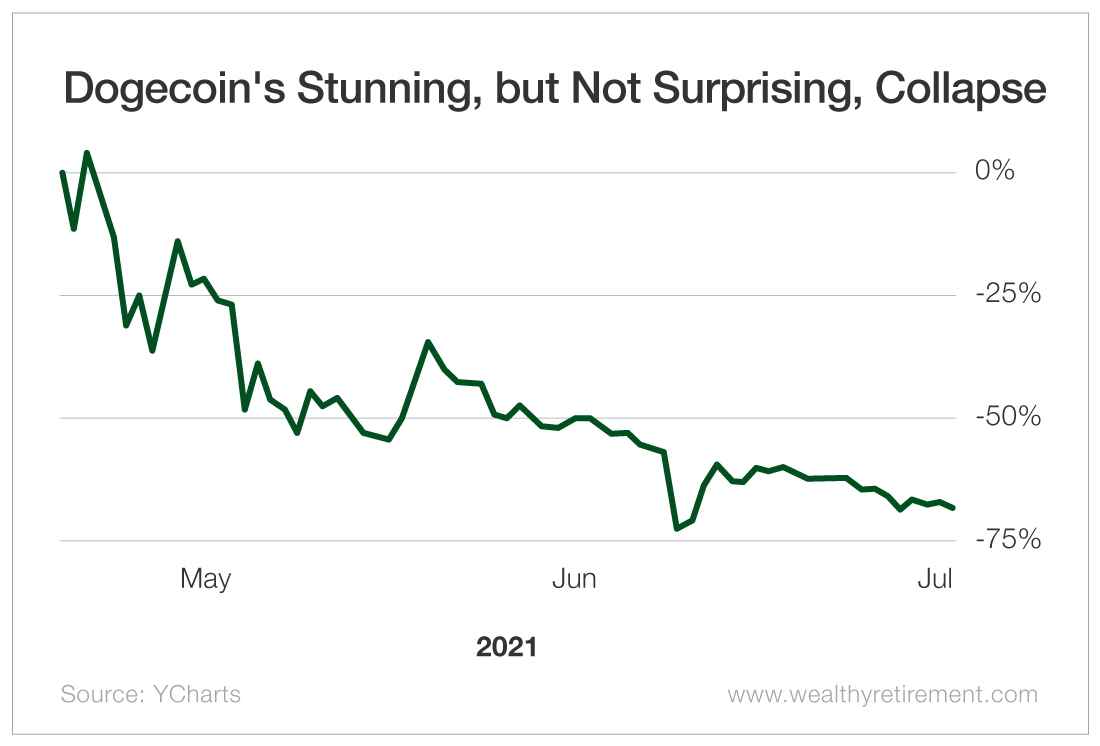 My May 6 article came close to calling the top of this ridiculous cryptocurrency.

I say “ridiculous” because Dogecoin was created as a joke. It was never meant to be anything more than a prank.

On May 6, I didn’t know that Dogecoin was on the verge of collapsing.

I did believe very strongly, however, that the price would eventually sink. And I still believe Dogecoin will eventually be proven completely worthless.

If I’m right, that means even though Dogecoin is down almost 70% from May 6, there is still a long way for it to fall.

Even Brilliant People Get Swept Up in the Madness of Crowds

To be a successful investor, you don’t need to be a genius. You just need to stay in control of your emotions.

That means resisting the urge to get greedy when something keeps going up.

It also means resisting the urge to panic when the markets get scary.

If you can control your emotions, you can do well over the long term as an investor without being terribly smart at all.

Sir Isaac Newton wasn’t just smart – he was one of the smartest humans to ever live.

Revered in his era, Newton discovered the law of gravity and invented calculus.

But despite being a straight-up genius, Sir Isaac Newton was not so brilliant as an investor.

Newton lost a bundle in an investment mania that reminds me a lot of what we have just witnessed with Dogecoin… a mania that came to be known as the “South Sea bubble.”

In 1711, Newton was an early investor in the South Sea Company.

This company was established primarily to manage British government debt.

Newton made out well initially and doubled his money over a number of years before cashing out.

Right after Newton sold his shares, the trading price of the South Sea Company went parabolic.

Watching it go up, up, up every day after he sold drove Newton crazy.

Between January and August 1720, the trading price of the South Sea Company increased almost tenfold.

Unable to control his greed, Newton jumped back into the shares of the South Sea Company at a much higher price – and with an even bigger investment.

He did that despite knowing full well that the company was worth nowhere near the price the shares were trading at. 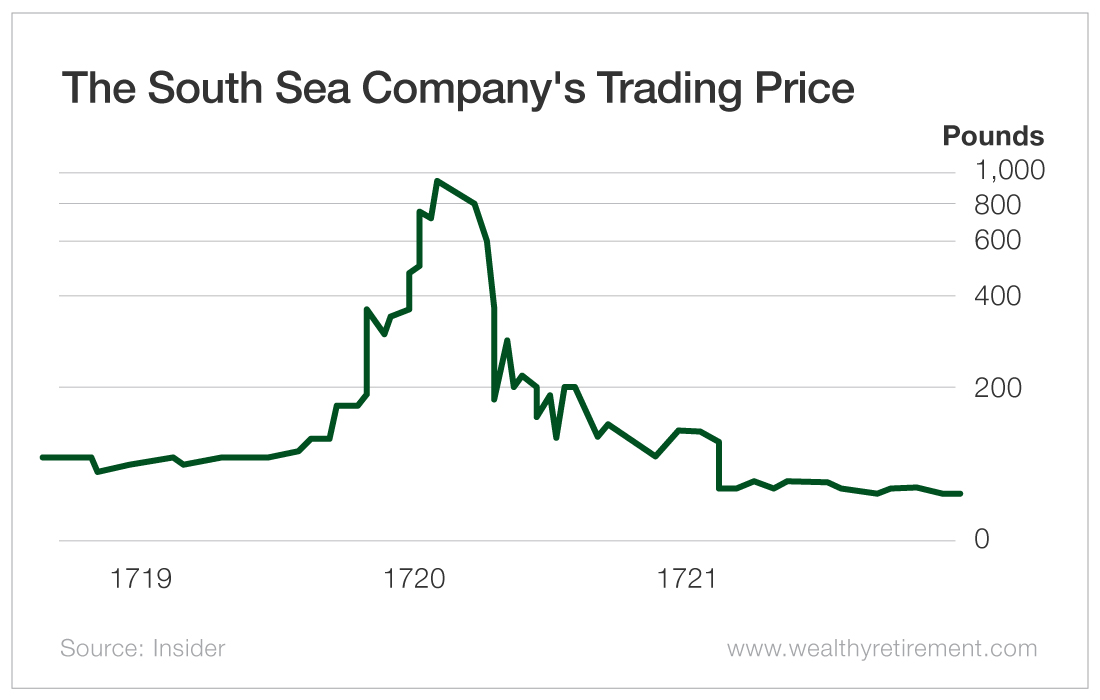 Within months, the trading price of the South Sea Company had plummeted by 90%.

It is reported that his losses equate to $3 million in current dollars.

Getting swept up in the mania and watching other people get rich in an incredibly short time made Newton succumb to his greed despite knowing better.

He lamented afterward about the South Sea bubble, saying that he “could calculate the motions of the heavenly bodies, but not the madness of the people.”

There is plenty of mania in the markets these days.

We have been covering much of it here at Wealthy Retirement through articles on Dogecoin, meme stocks and profitless electric vehicle companies.

It is great fun to watch these things, but as long-term, patient investors, we will not get fooled into participating.

Like with Dogecoin and the South Sea Company, these speculative manias always end badly.

Beware a Third Dividend Cut for This 8.9% Yielder

Behind the Scenes of Financial Television

The Greatest-Ever Investor Is Making a Huge Mistake