Today’s most talked-about innovation used to be the stuff of shoe-phone-toting secret agent Maxwell Smart.

Today, this product is in your iPhone… your car… and even your electric toothbrush. It’s the world’s fourth-most-traded product, which makes it indispensable…

And yet, as the chip shortage rages on, the semiconductor is scarce.

Demand for electronics surged as the COVID-19 pandemic forced us to hunker down in the digital world. Meanwhile, demand for vehicles faded – so automakers canceled their orders.

Chipmakers pivoted, turning their focus to newer chips used in smartphones and laptops. Last year, less than 12% of chipmakers’ production spending went to tools to produce the more “commoditized chips” found in cars and speakers, according to The Wall Street Journal.

That’s less than half of what the industry spent on equipment for producing the more sophisticated chips found in smartphones.

When automakers came back to renew their orders, they found that they had been left behind.

Now producers like Toyota Motor Corp. (NYSE: TM) and General Motors (NYSE: GM) are feeling the pain. Ford Motor Company (NYSE: F) has cut production at multiple plants. One F-150 could be held up by a $50 part.

That’s because, in addition to chipmakers’ shift toward smartphones and laptops, a series of catastrophes, from the Texas cold snap to a factory fire in Japan, held up production. Not to mention the fact that U.S. sanctions embittered an already frosty relationship with Chinese semiconductor manufacturers.

The result? A distinctly 21st-century crisis known to some as “chipageddon.”

And it’s all hands on deck as the crisis unfolds. For example, Broadcom (Nasdaq: AVGO), one of the industry’s leaders, has reported that 90% of its supply for the year has already been ordered.

Meanwhile, Intel (Nasdaq: INTC) is footing a $20 billion bill to set up shop in two new plants in Arizona.

And the $50 billion that President Biden has pledged to boost U.S. chip manufacturing is yet another catalyst for a sector that has drastically outperformed the S&P 500 since 2016.

The following chart shows how, since 2016, the SPDR S&P Semiconductor ETF (NYSE: XSD) has more than doubled the return of the S&P 500. 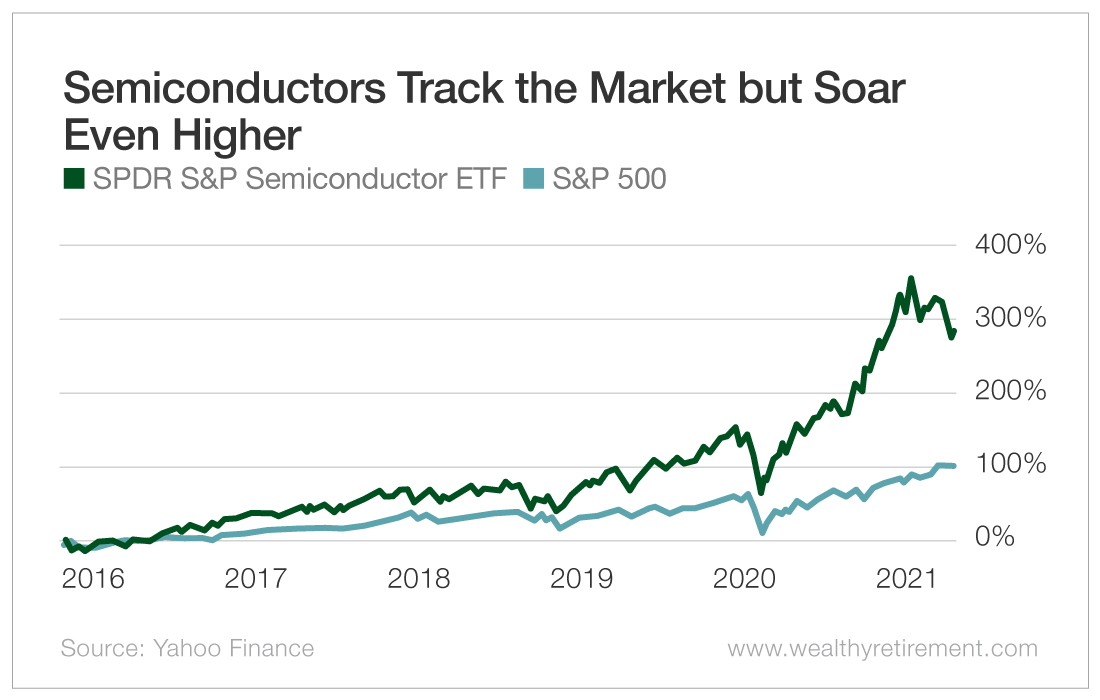 What changed in 2016 that began setting chips apart from the rest of the market?

To answer this question, I turned to The Oxford Club’s resident expert on semiconductors (and former vice president of a semiconductor vendor), Engineering Strategist David Fessler.

In 2016, the market finally started to realize the importance of semiconductors in nearly every sector.

There have been several big drivers that have fueled the boom in semiconductor chips. The world started to build the 5G infrastructure. Cars and trucks continue to be loaded up with electronic features. And now we have electric vehicles ramping up with even more chip content. The Internet of Things and Industry 4.0 are two more drivers.

Some experts credit the semiconductor industry for the tech sector’s magnificent rise. And tech’s bounds higher have recently decided the fate for the entire market, as information technology alone makes up more than 22% of the S&P 500.

This makes them a strong pick-and-shovel (err, chip-and-shovel) play for the country’s reopening.

According to Dave, “Semiconductor chipmakers are now in catch-up mode because of the pandemic. I believe the shortage will last well into 2022.”

So keep an eye on this sector – whether you watch the SPDR S&P Semiconductor ETF or, as Dave prefers, the Direxion Daily Semiconductor Bull 3X Shares ETF (NYSE: SOXL).

Prudential Financial’s chief market strategist has called semiconductors a bellwether for the larger economy – and as we saw in the chart above, they do track the S&P 500 – so they should be one of investors’ top industries to watch today.

The U.S. Already Has Double-Digit Inflation