Value Stocks Are Enjoying Their Moment in the Sun

Editor’s Note: Everyone wants to know what they should be doing in this rough market. And Chief Income Strategist Marc Lichtenfeld has an answer.

It’s NOT selling and sitting in cash.

It’s NOT bonds, crypto, energy stocks or anything like that.

Click here to discover his No. 1 action to take in this brutal stock market.

Normally on Wednesdays we run our Safety Net article, where I analyze the safety of a company’s dividend. But after the earnings reports that were released last week, I wanted to make sure you saw this column sooner rather than later.

There has been a big shift in the market. In the January issue of my newsletter, The Oxford Income Letter, I said that value stocks were going to outperform growth stocks this year and for the next several years.

So far, that has been the case. 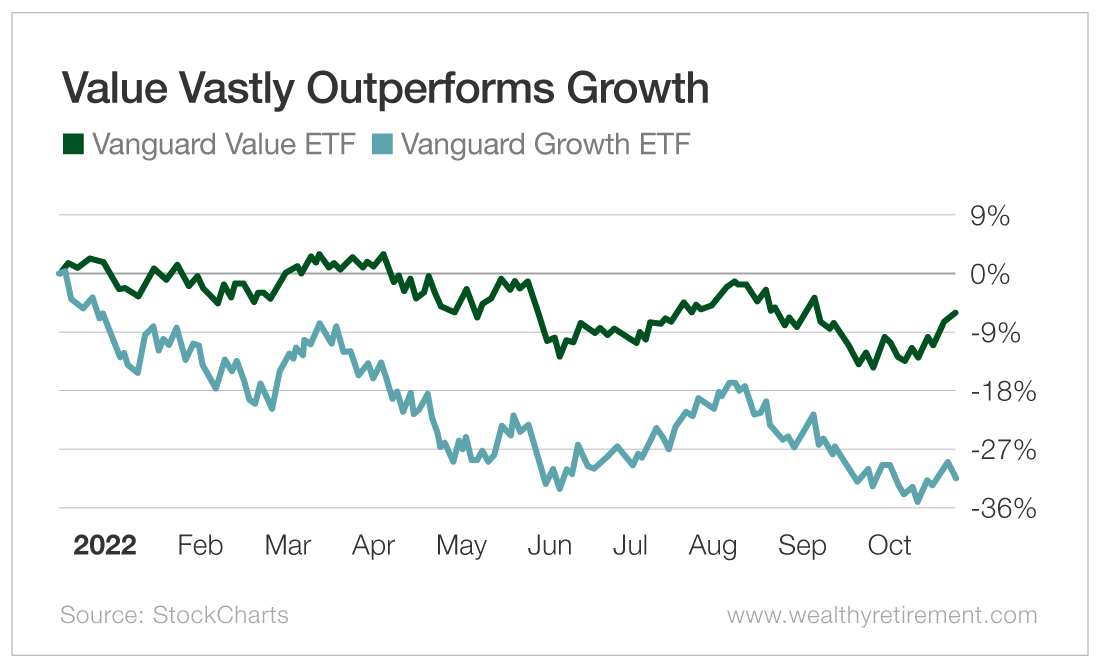 The two lines are the Vanguard Value ETF (NYSE: VTV) and the Vanguard Growth ETF (NYSE: VUG). You can see that since the beginning of the year, the value fund has outperformed the growth fund by a whopping 25 percentage points. Value is down about 6% – certainly not great, but not a disaster either. Growth, on the other hand, is a disaster, having plummeted more than 31% so far this year.

It’s not surprising at all, especially when you look at third quarter earnings, which are rolling in. Growth poster children Alphabet (Nasdaq: GOOGL), Amazon (Nasdaq: AMZN) and Meta Platforms (Nasdaq: META) all reported dismal results. Alphabet (Google’s parent company) reported the slowest growth in its history. Profits fell 10% at Amazon, and earnings were cut in half at Meta. Not much of a growth story for these former leaders.

All three stocks traded at 52-week lows on the news.

On the flip side, top value stocks are doing just fine, thank you very much.

Merck & Co. (NYSE: MRK) is also trading at an all-time high after it reported a 14% increase in sales in the third quarter. Despite the record high stock price, it trades at just 13.5 times the full year’s projected earnings.

And last week, Caterpillar (NYSE: CAT) jumped the most it had in two years on strong earnings.

Caterpillar is trading at just 15 times 2022’s forecast earnings, or just a hair above one times growth.

There are myriad examples of value stocks acting strongly with solid fundamentals behind them – including growing cash flow – while tech stocks and other previous growth darlings are getting the spit kicked out of them.

The cycles in which either value or growth outperform the other typically last several years. I don’t expect this time to be any different. Value should perform better than growth for at least a few more years.

If you want your portfolio to grow, find some quality value stocks that are still cheap and whose underlying companies are growing their businesses and paying dividends to generate some income for you.

With prices on everything rising every day, there’s no reason to pay too much for your stocks, especially when there are so many quality ones on sale.

The “Great Rotation” Is Coming: Here’s How to...