The video streaming wars went into overdrive this week. The Walt Disney Company (NYSE: DIS) launched its new service, Disney Plus, on November 12.

However, I don’t believe this is a winner-take-all scenario. A recent Wall Street Journal and Harris Poll survey found Americans are willing to spend $44 per month on streaming services – meaning they can afford two or three different ones.

Still, Disney’s new service costs just $6.99 a month, which seems like a bargain compared with $12.99 for Netflix’s most popular offering. Some investors worry Netflix is going to lose subscribers to Disney or that it will have to cut prices to match.

Netflix stock is down more than 20% in the past six months, while Disney is up more than 10%.

Now, let’s stop for a minute and marvel at the abundance of options we have as consumers. The quality and variety of “things to watch” have never been greater – all from the comfort of your home (or smartphone, or laptop).

Here’s a breakdown of the major competitors: 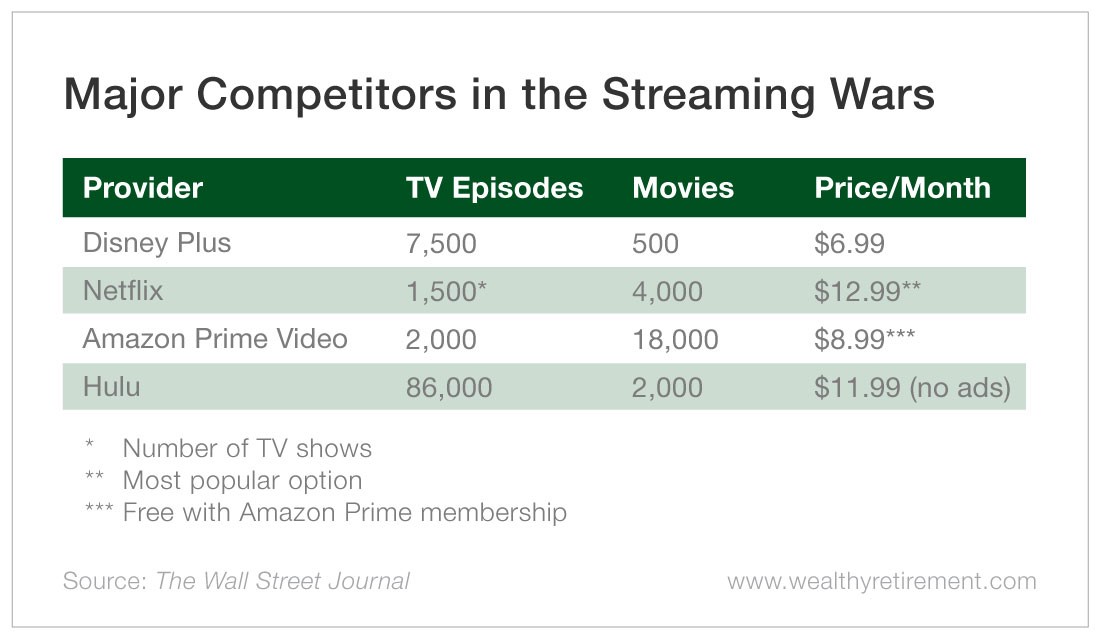 And that list is incomplete! There are a number of other competitors, including…

We are moving closer to the promise of the famous Qwest commercial from the 1990s, when a weary traveler finds out his hotel has no room service, but “all rooms have every movie ever made in every language, anytime, day or night.”

What a time to be alive! Especially if you like binge-watching… almost anything.

With this many competitors fighting for a slice of your entertainment budget, there’s bound to be a shakeout.

To be sure, Netflix has been a phenomenal performer over the past five- and 10-year periods. But its U.S. subscriber growth appears to have stalled.

In fact, after years of focusing on subscriber growth as Netflix’s key metric, CEO Reed Hastings now says “the real measurement will be time.”

In other words, how much existing subscribers watch is more important than how many subscribers it has.

Hastings may have a point: Netflix already has nearly 160 million subscribers worldwide, and time spent watching online is a good indicator of consumer satisfaction. Satisfied customers are more likely to stick around and pay their monthly fee.

But asking investors to change focus is always dicey.

Noted short seller David Einhorn says Netflix has “yet to demonstrate a profitable business model.” He believes the company’s challenges are going to mount amid increased costs for top-tier content.

The bidding wars for “bingeable” shows like The Office, Friends and Seinfeld suggest that’s true.

“This year the company projects to burn a stunning $3.5 billion on just $20 billion of revenue,” Einhorn wrote in a letter to shareholders in October.

Which brings us back to Disney. Disney shares jumped last week after it reported earnings that beat expectations.

The stock rose again Tuesday on launch day for Disney Plus. The gains came despite reports of technical glitches on day one, which Disney attributed to customer demand exceeding expectations – a good problem to have.

Disney shares surged another 7% Wednesday after announcing more than 10 million people signed up for Disney Plus.

But Disney is also spending an awful lot of money to become a streaming giant. The “House of Mouse” plans to spend $1 billion on new programming next year alone.

And it’s going to keep on spending in the years ahead, despite a library that already features all the Disney classics from your childhood as well as Pixar, Marvel, “Star Wars” and The Simpsons.

(Disney acquired The Simpsons, among other titles, in its $71 billion purchase of 21st Century Fox earlier this year.)

Overall, Disney is expected to lose $11 billion in the streaming business before turning a profit in 2024. And that’s if everything goes right!

Notably, while Disney’s stock is going up, estimates for its earnings are coming down. The consensus is Disney will earn $5.83 per share in fiscal 2020, down from projections of $8.30 a year ago.

Disney may very well beat those estimates, but the trend is not your friend here. Disney’s price-to-earnings ratio is more than 25 based on those forward projections, higher than the S&P 500 overall ratio.

And its dividend yield is just 1.2%, which is lower than the market average.

In short, Disney’s stock isn’t cheap, and a lot of “good news” is already priced in. And Bob Iger, who has by all accounts done an incredible job running Disney since 2005, is set to retire in 2021.

Short-term traders would be wise to take some profits here.

Long-term investors should wait for an opportunity to buy at lower levels, which I suspect will be coming sooner rather than later.

A 20% Yield With a Good Chance of an Upgrade

How to Activate Your “Plan B” Retirement