Matthew will reveal how increased output and decreased demand for crude could put energy companies at risk.

Read on below for a first glimpse at how this “OPECalypse” is dangerous for American energy.

We are about to see a mass extinction event.

One on a scale we have never seen before.

On Monday, the price of U.S. crude oil plummeted not just below $1 but into negative territory for the first time ever.

Black gold was shredded for a one-day drop of more than 300%!

To say it was the most catastrophic day in crude’s history feels like an understatement.

But this is the exact situation we’ve been fearing.

This is the setup I’ve been trying to warn investors about not just for weeks… but for years.

I’ve preached that not only is “peak oil” dead… but so are “peak oil profits.”

And that moment stormed into headlines in the most historic way possible.

In that moment, the great shift in the global energy markets got underway.

And over the past two decades, the U.S. transitioned from the world’s largest energy importer to a net exporter. This had not happened in 67 years… 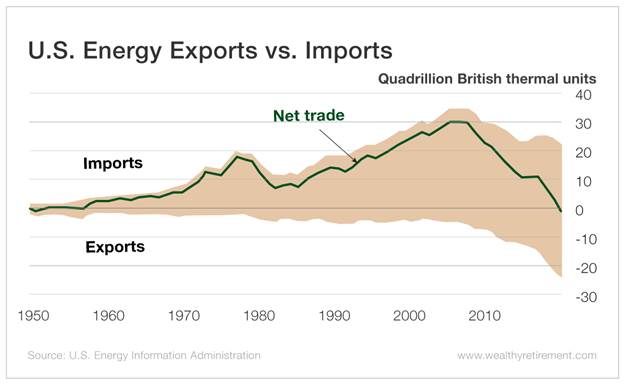 And this didn’t come without controversy.

China topped the U.S. as the largest energy importer, guzzling 20% of all crude.

And that fact hasn’t sat well with the Old World energy hierarchy.

The U.S. had won its energy independence.

And since the U.S. isn’t a part of OPEC – and doesn’t have to bow to the cartel’s oversight – a new tactic was devised.

Instead of turning off the spigots to fuel a shortage, OPEC went in the other direction…

It opened the floodgates to drown the world in oil. And this glut had one and only one target: the U.S.

From 2014 to 2016, OPEC increased output to drive prices lower. The 70% decline it triggered was one of the largest prices drops since World War II – the first “OPECalypse.”

The aftershocks have been devastating. For example, more than 200 drillers have filed for bankruptcy since 2015.

But it’s about to get a whole lot worse…

We knew the clock was ticking on the next OPECalypse. However, this one is on steroids.

COVID-19 gave OPEC the perfect opportunity to open the floodgates once again and drive U.S. producers to the brink of extinction.

My colleague David Fessler and I have warned readers about it…

Even worse, Saudi Arabia is supposed to be our ally.

The End of Peak Oil Profits

To kick off 2020, Dave and I forecast a collapse in crude.

Our reasoning was based on fundamentals: The global markets were oversupplied – in part due to the glut OPEC originally triggered six years ago.

And that was before the economic impacts of COVID-19!

The coronavirus has exacerbated the situation.

Countries have closed their doors for business as cases and deaths have mounted. Flights are grounded. Ships are docked. Buses and cars gather dust as shelter-in-place orders spread across the globe.

And because of this, we’re witnessing something we haven’t seen in more than a decade: contracting global demand for crude oil.

In fact, global crude demand has imploded as much as 40%.

And it was during this crisis in March that Saudi Arabia and Russia launched a scorched-earth policy against the U.S. To open the floodgates and drive prices lower.

Now, before you go saying, “Wait, but OPEC and its allies have agreed to cut production.”

Yes, they’ve agreed to reduce their bloated production by 9.7 million barrels per day.

But that’s less than 10% of worldwide output, and it doesn’t even cover half of the demand lost.

Here’s the troubling fact few analysts will discuss… Ever since the U.S. emerged as a true oil-producing powerhouse seven years ago, investing in oil has been a fool’s errand.

I mean, look at the annual returns of American crude prices since 2000… 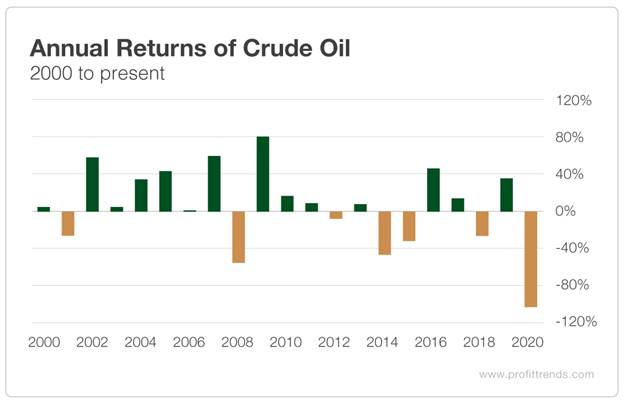 Four of the worst years for the commodity have taken place since 2014.

But the 2020 OPECalypse is poised to be far worse than anything we’ve seen before.

With crude in the red because no one wants to take ownership of a barrel and prices in the toilet, the entire American energy industry is on the brink of destruction.

Remember, shale producers struggle to make profits at $60 per barrel. 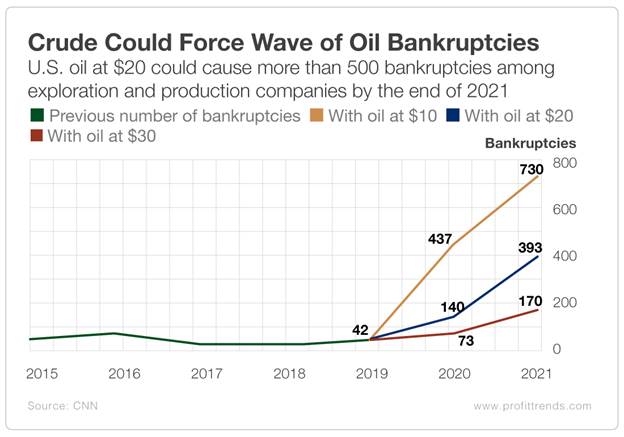 These are companies that are in investors’ retirement accounts, 401(k)s and pension funds. Energy companies pay dividends, so millions of retirees rely on their income.

So this isn’t a moment to rush out and snatch up energy companies for cheap.

What we are witnessing is the beginning of the end – an extinction event on a massive scale. And this falling knife has the potential to sever arteries.

This is a dangerous period for investors. And I’ll continue to stress selection over speculation.

Investors must understand that hundreds of U.S. oil and energy companies are about to go belly-up… and many of them are sitting in retirement accounts as ticking time bombs of insolvency.

Investors must know which ones to avoid before it’s too late.

Few companies are going to be able to survive these prices. The latest OPECalypse has begun.

Why Your Next Great Bargain Isn’t in the S&P

Why Investors Should Look to the Banks in...