When It Pays to Take the Road Less Traveled

The mainstream press loves to talk about “intergenerational wars.” Stories about how much baby boomers and millennials or millennials and Generation X don’t get along make for good water cooler chatter.

But in reality, we’re really all alike… at least when it comes to investing.

A recent survey of self-directed investors by Charles Schwab found a stunning similarity in major stock holdings across the generations. 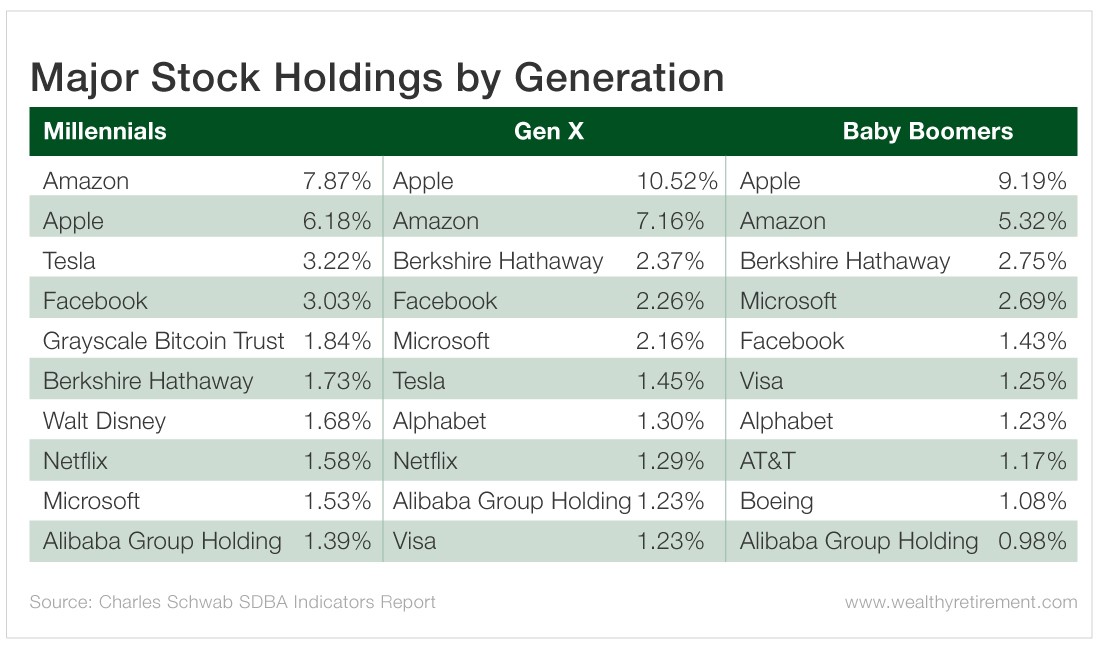 But what’s striking here is the commonality across the generations.

Of course, it’s not hard to see why stocks like Amazon (Nasdaq: AMZN), Apple (Nasdaq: AAPL) and Berkshire Hathaway (NYSE: BRK-A) are so widely owned. These are great franchises that have produced stellar long-term returns for investors.

With the notable exception of the Grayscale Bitcoin Trust, all of these names have similar qualities: They’re incredibly successful businesses whose stocks are widely owned and widely followed. They also trade in ample volume.

Back in the 1970s and early ’80s, there was a saying among mutual fund managers: “You’ll never get fired for owning IBM (NYSE: IBM).”

As was true back then with IBM, there is a similar “safety in numbers” today when it comes to owning stocks like Alibaba (NYSE: BABA), Microsoft (Nasdaq: MSFT) and the other names on that list.

Running with the herd is not always a bad thing, especially in a bull market. But let’s consider the opportunities in less “crowded” stocks.

If you prefer a quiet spot to a party boat, there are better places to go fishing…

The past decade has been fantastic for equity investors. Led by Netflix’s (Nasdaq: NFLX) nearly 3,800% gain, the best-performing S&P 500 stocks of the decade include some of the intergenerational favorites noted above.

But there are a lot of names on the list that don’t get nearly as much attention – neither from the media nor from Wall Street.

Raise your hand if you’ve ever heard of them.

And yet, each of those stocks gained more than 1,100% in the past decade. Apple, by comparison, rose a mere 900% in the same time span.

(Of course, some investors – particularly those here at The Oxford Club – were in on the action and benefited from these companies’ stellar performance.

For example, Oxford Bond Advantage readers took profits when their TransDigm bond was called this November.)

There are other great performers of the past decade – stocks like Ross Stores (Nasdaq: ROST) and O’Reilly Auto Parts (Nasdaq: ORLY) – that aren’t nearly as “sexy” as Apple or Google parent company Alphabet (Nasdaq: GOOGL).

Taking this a step further, Bank of America recently released a report highlighting the most “underowned” stocks in the S&P 500, relative to their weight in the index.

A portfolio of the “most underweight stocks in the S&P 500 with the narrowest ownership, probably beats a portfolio of the inverse,” tweeted David Schawel, chief information officer of Family Management Corp., a New York-based registered investment advisor with $1.7 billion in assets under management.

Schawel was being facetious (I think). But don’t be surprised when some of these “forgotten stocks” end up on a list of the best performers in the coming decade.

In every generation, people like Albert Einstein, Martha Graham, Muhammad Ali and Elon Musk change the world by thinking differently. Apple famously celebrated people like this in an ad campaign in the late 1990s. The text from that ad reads…

Here’s to the crazy ones. The misfits. The rebels. The troublemakers. The round pegs in the square holes. The ones who see things differently. They’re not fond of rules. And they have no respect for the status quo. You can quote them, disagree with them, glorify or vilify them. About the only thing you can’t do is ignore them. Because they change things. They push the human race forward. And while some may see them as the crazy ones, we see genius. Because the people who are crazy enough to think they can change the world, are the ones who do.

You don’t have to be a misfit or crazy to be a successful investor. Jack Bogle was already an established Wall Street executive when he came up with the idea of index investing.

Many former colleagues probably thought he was crazy when he founded The Vanguard Group, which now has more than $5 trillion in assets under management.

This holiday season, The Man Who Solved the Market is on the wish list of everyone on Wall Street.

The firm’s flagship Medallion Fund has had annual returns of 66% since 1988, outperforming the S&P 500 (and other famed investors like Warren Buffett and Carl Icahn) by miles.

Today, Simons is hailed as the father of so-called quant investing, which now accounts for about 30% of stock trading volume. But Simons’ firm was an outlier when it started relying on data analytics to create algorithmic trading in the late 1980s.

The most interesting thing about Simons is he had zero experience in investing or traditional Wall Street analysis when he started Renaissance Technologies.

By “thinking differently,” Simons and Bogle amassed fortunes and revolutionized the investing world. There’s no reason you can’t do the same thing for your portfolio in 2020.

How to Profit During the Most Wonderful Time of the Year