In the 1999 film Arlington Road, Jeff Bridges plays a professor who becomes obsessed with investigating his neighbors. After several plot twists, Bridges’ character becomes a suspect in a terrorism investigation.

“They have to put a face on it… to tell a story,” he says with resignation.

That line got me wondering: Who is the face of the stock market?

At various points, different people have embodied the stock market, putting a human face on what can often be a mysterious and indescribable beast.

For example, Alan Greenspan was the face of the market in the 1990s and early 2000s. As chairman of the Federal Reserve from 1987 to 2006, Greenspan oversaw the 1990s bull market and the subsequent burst of the dot-com bubble.

Whether his policy decisions were right or wrong, Greenspan was there – and he deserves as much credit for the good times as he deserves blame for their aftermath.

These high-profile companies, in finally facing the music, were a microcosm for the market at large.

Bill Gates and Steve Jobs represented the tech revolution of the 1980s and 1990s – and then Jobs became the face of the market again after the launch of the iPhone in 2007.

Investing titans Warren Buffett and Peter Lynch also have certainly had their time in the public consciousness. Buffett was already a legend when he helped restore faith in the markets during the financial crisis with his “Buy American” op-ed in October 2008.

(That troubled era, by the way, was also represented by failed bankers, such as Lehman Brothers’ Dick Fuld and Countrywide’s Angelo Mozilo.)

The Face of the Market Today

Fast forward to the present. One man truly captures everything people love and hate about the stock market: Tesla (Nasdaq: TSLA) and SpaceX CEO Elon Musk.

Jeff Bezos may be the world’s richest man, but Musk is Steve Jobs, Albert Einstein and P.T. Barnum all rolled into one.

While other tech CEOs focus on getting users to fork over personal data or pay a monthly subscription fee, Musk is attempting to totally transform the entire transportation and energy industries – and the global economy.

In his “spare time,” he’s making plans for humans to colonize Mars, trying to save humanity from the dark side of artificial intelligence, and attempting to build a “hyperloop” to dramatically improve public transportation.

But let’s stay grounded on this planet. With Tesla, Musk embodies both the fear and the greed of this era.

His history of bizarre behavior mimics the market’s own tumultuous – and sometimes fickle – ups and downs. Most famously, Musk tweeted in August 2018 that he was “considering taking Tesla private” and had secured funding for the transaction. The SEC sued Musk for securities fraud.

In a settlement with the securities regulator, Musk paid a fine, stepped down as Tesla’s chairman, and agreed to have Tesla’s lawyer review relevant tweets going forward.

In addition, Musk was caught on camera smoking cannabis during a podcast interview and got into a public feud with British broker and cave explorer Vernon Unsworth.

And yet, despite all this (and more), Tesla’s stock has been a juggernaut, especially in the past nine months – surging from under $200 to more than $500. 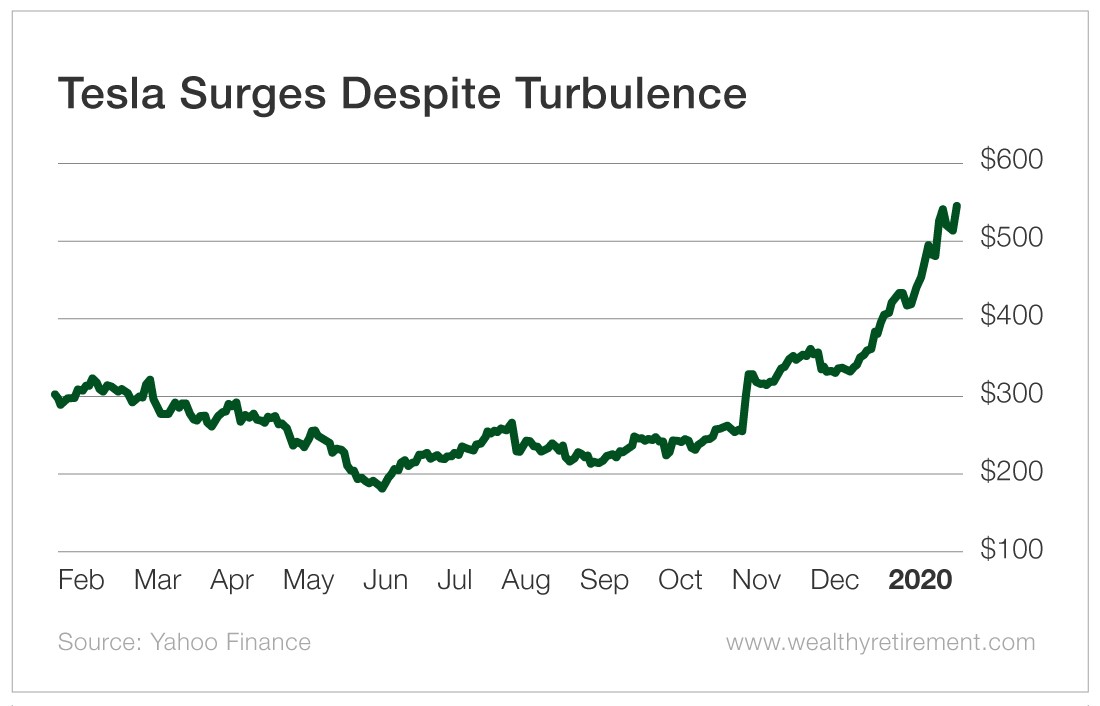 What Tesla’s Rise Reveals About the Larger Market

Like the market representatives who came before him, Musk – especially through Tesla – embodies the spirit of stocks today.

Tesla remains the most heavily-shorted U.S. stock, with $14.5 billion of short interest as of January 15, according to S3 Partners.

(And if you remember from my last piece, investors are doubtful about the market too, pouring record amounts of savings into bond funds and pulling more than $41 billion out of equity funds.)

Tesla investors have reason to doubt…

The bear case on Tesla is fairly simple: The company burns through billions in cash, has never generated an annual profit, and has $14.6 billion in debt.

Just last May, Musk warned his employees Tesla needed “hardcore” cost-cutting measures or it would run out of money in 10 months.

But the bull case on Tesla is fairly simple too: Musk is a visionary genius, and Tesla’s cars are lightyears ahead of the competition. Tesla’s cash position has also improved, and analysts are predicting a huge swing to profitability in 2020.

In fact, the consensus estimate is currently for Tesla to reach nearly $6 per share.

If the stock’s performance over the past year is any indication, Tesla – like the broader market – is destined for long-term growth, and investors will have plenty of opportunities to profit.

But remember, with Musk as the embodiment of the broader market, you have to take the crazy – and all the bumps that come along with it – with the visionary.

It’s rare when so much is encapsulated into any one company, but that’s the case with Tesla. Keep an eye on the stock for a read on whether the animal spirits on Wall Street continue to run high or start to lose some steam.

Or just keep an eye on Musk’s face: If he’s still smiling after Tesla reports fourth quarter results on January 29, it’s a good bet the bull market will keep on rolling.

Will This 27% Yield Last? It Depends on Who You Listen To