Last November, one of my favorite investors in the world was pounding the table on the energy sector.

He called it “one of the few ‘once-in-a-lifetime’ investment opportunities that one can be fortunate enough to actually come across in a lifetime.”

Those are strong words coming from an investor with a stellar track record: Murray Stahl, CEO of Horizon Kinetics.

I wrote about Stahl’s bold contrarian call on oil and gas on November 10, 2020.

Since then, the energy sector has doubled the performance of the S&P 500. 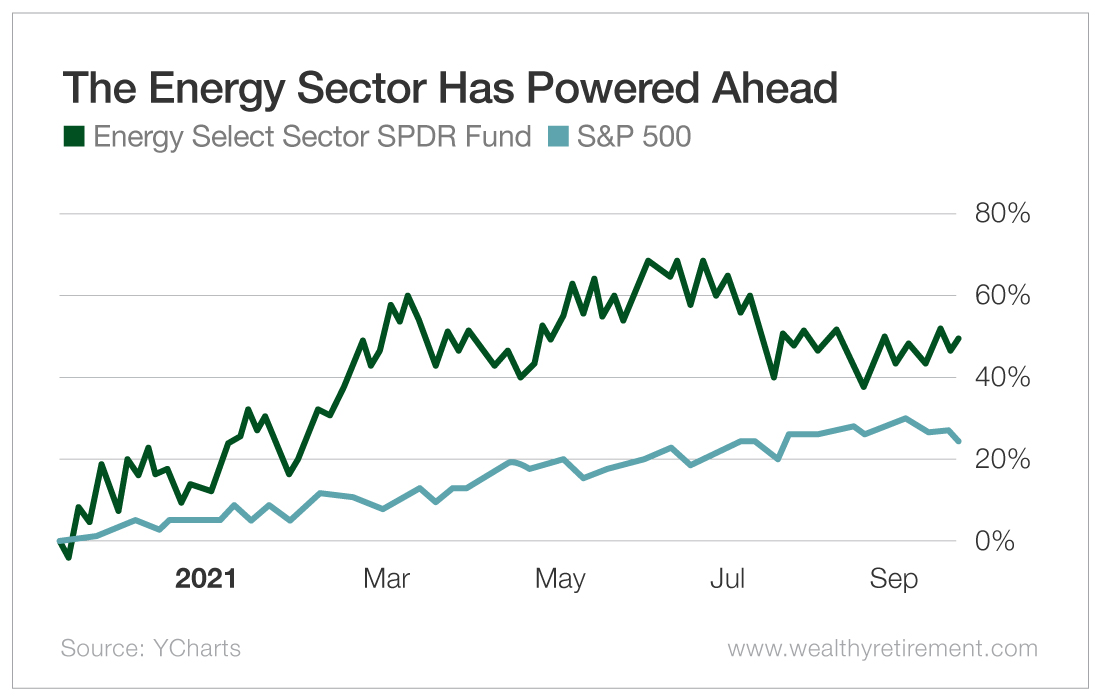 That outperformance was no easy feat, considering the S&P 500 has also been on a tear.

Stahl’s bullishness last November was based on his belief that we are headed for a massive oil supply shortage and price spike.

His oil shortage thesis rests on a few observations…

While Stahl’s bullish call on oil and gas stocks last November has worked out incredibly well, I have to say that at this point, the result is based more on luck than skill.

Without COVID-19 vaccine success and the reopening of economies around the world, the oil and gas sector surely would not have gone on such a tear.

I’m not saying that there isn’t merit to Stahl’s prediction of an oil supply shortage.

French oil major TotalEnergies (NYSE: TTE) thinks we are going to have a 10 million barrel per day shortfall by 2025.

But at this point, it is way too early to say whether Stahl is right or wrong.

His call is longer term, so we’ll need more time to see how it plays out.

In the Meantime, Oil Majors Are Behaving Strangely…

Oil and gas major Chevron (NYSE: CVX) intends to be a leader in clean energy!

Now the company is embracing it.

I have been watching with amazement as all of the oil and gas majors have unveiled plans to go green.

What I find fascinating about Chevron’s plan is that the company sees “green hydrogen” as playing a big role in its future.

Green hydrogen is created with electrolyzers that convert water into hydrogen by using renewable energy from solar power and other sources.

From what I’ve been reading, it looks like green hydrogen has a big future.

As a clean energy source, green hydrogen has one huge advantage over wind and solar power.

Bank of America (NYSE: BAC) believes that green hydrogen is going to be an $11 trillion market by 2050.

Bloomberg New Energy Finance has reported that there are already more than $90 billion worth of green hydrogen projects in the global pipeline.

Those are some eye-popping numbers.

The dollars involved here make green hydrogen a market that I will be paying attention to in search of investment opportunities.

If I find one, you will be the first to know.

A Three-Ingredient Cure for Rising Inflation