My father was an accountant.

He was more of a “grind it out every day for decades” bookkeeper at a small private business.

My father was a reliable, honest employee – exactly the kind of accountant a business like that needs.

Despite my father spending four decades at the same job, his annual vacation entitlement was always just two weeks. (No wonder he was thrilled when it came time to retire.)

My mom was a teacher.

Not just any teacher, but a world-class teacher. Every night as a child I watched her sit in the living room preparing something new so that she could make learning fun for her students the next day.

I can’t even tell you how many adults have told me that she was the best teacher they ever had. Today, at age 73, she still substitute teaches at my childhood elementary school.

She does it because she loves the kids. I’m biased, but she may be the best person I know.

My parents were excellent role models – most importantly as decent human beings, but also financially.

Despite making only reasonable livings over their 40-plus-year careers, my parents managed to accumulate a good-sized retirement nest egg.

With discipline and sacrifice.

My parents built up their retirement account with a very simple two-step formula:

Step 1: Always living well below their means and saving every month

While other families spent big dollars traveling across the world on vacation, we went camping. We didn’t buy brand-new cars – we always bought used. We had a nice house, but we definitely could have had a bigger one.

Every financial decision was made carefully. The goal was to achieve financial freedom and create a solid retirement income.

For 40 years, my parents worked hard and saved.

They did what they were supposed to do.

Then central bankers took their 40 years of hard work and sacrifice and turned it into a waste of time.

The table below provides the gruesome details. This is the annual interest income that a $1 million investment in 10-year U.S. Treasury bonds has produced by decade. 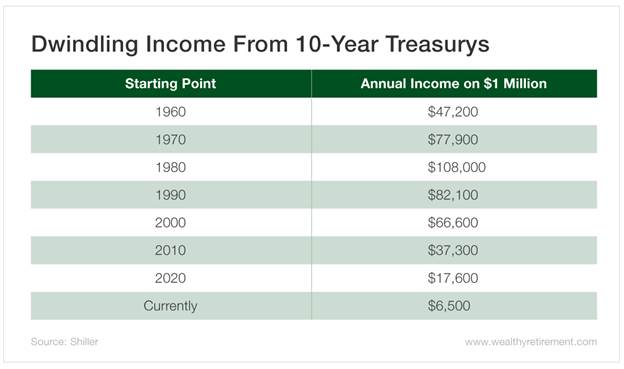 For middle-class folks like my parents, building up a $1 million retirement account over 40 years was a nearly impossible task.

It took a literal lifetime of work and sacrifice.

Now look at what the central bankers have done to people like my parents.

Over their four decades of saving, my parents were led to believe that $1 million saved and invested into a safe interest-bearing deposit could create a sturdy retirement income stream of $60,000 to $100,000 per year.

Instead, what do they get after a lifetime of saving and work?

Interest rates are now virtually zero, and the 10-year Treasury pays next to nothing – currently just 0.62%. 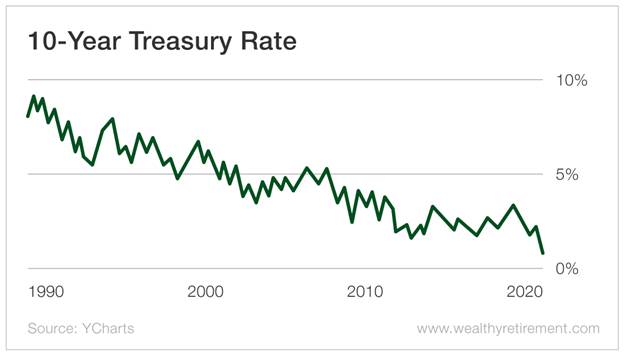 Imagine that – $1 million of savings can’t generate anything more than a trickle of interest income.

My parents and their entire generation have had their lifetime of work ruined.

This Is Why We Need Stock Market Crashes

Government balance sheets across the globe were saddled with massive amounts of debt before COVID-19. Coming out of this pandemic, the debt that countries are carrying is going to be ridiculous.

That means that central banks aren’t going to be taking interest rates significantly higher for years to come. They simply can’t afford to.

As savers, that means that we need to find income alternatives outside of interest-bearing deposits.

An important source of that income is going to have to be dividend payments from high-quality, publicly traded companies.

That is why I believe that stock market sell-offs like the one we recently experienced are important. They give us the chance to lock in higher yields.

A market crash feels like a disaster, but it is actually an important opportunity.

So don’t think of it as “suffering when the stock market goes down.” Instead, focus on exploiting the sell-off by zeroing in on high-quality stocks that are now offering better dividend yields than they have in a while.

After all, we know central banks aren’t going to help us with our retirement income. We have to take care of this ourselves.

Why You Should Never Buy Bond Funds