Widows and Orphans… Is Nothing Sacred Anymore?

There was a time not so long ago when you could count on a wealthy retirement without much work at all. You’d call your broker and tell them that you wanted to be in safe, dividend-paying utility stocks. In the industry, those were referred to as widow-and-orphan stocks.

They always paid their dividends, and some would also raise them steadily. You could count on a nice 5% to 7% annual yield and head off to the links to enjoy that hard-earned retirement savings account.

That’s just not possible anymore. The market won’t let it happen. In fact, thanks to everything from leveraged balance sheets and lying CEOs to algorithmic trading and even climate change, your retirement is more at risk now than ever before.

The best reminder of this came from Enron and WorldCom. Both companies were in the utilities sector. One was a telecommunications company, and the other was a power company. Both failed spectacularly because of fraud.

I remember spending a few days at a very exclusive club in Key Largo in the early 2000s. I saw a huge yacht berthed at one of the docks. I asked one of the deckhands cleaning it who it belonged to. He said it was Bernie Ebbers’ – the dirty CEO and co-founder of WorldCom – boat.

A few years later, Bernie drove himself to jail in a Mercedes to serve his 25-year sentence for fraud. Ken Lay faced a similar fate for cooking the books at Enron with his financial partner in crime, Jeff Skilling. Both companies devastated shareholders and pensioners alike.

Today, while spectacular frauds like WorldCom and Enron are rarer, we are not immune from such events, by any stretch. Still, you don’t need a good fraud to separate you from your money or retirement plans.

We were reminded of that late last year. Pacific Gas and Electric (NYSE: PCG), or PG&E, shares plummeted in the wake of the latest California wildfires, which were sparked by PG&E equipment. PG&E’s power lines were also deemed responsible for causing multiple wildfires in 2017.

Those fires resulted in billions of dollars in damages. In fact, the company may be liable for more than $30 billion in damages because of fires in 2017 and 2018.

For shareholders, the story is even worse. They went to sleep thinking that they were invested in a safe utility. They woke facing a chart like the one below and a company filing for bankruptcy. Shares plunged from as much as $49 to as low as $6 in the span of a year, and those shareholders could forget about their dividends too. 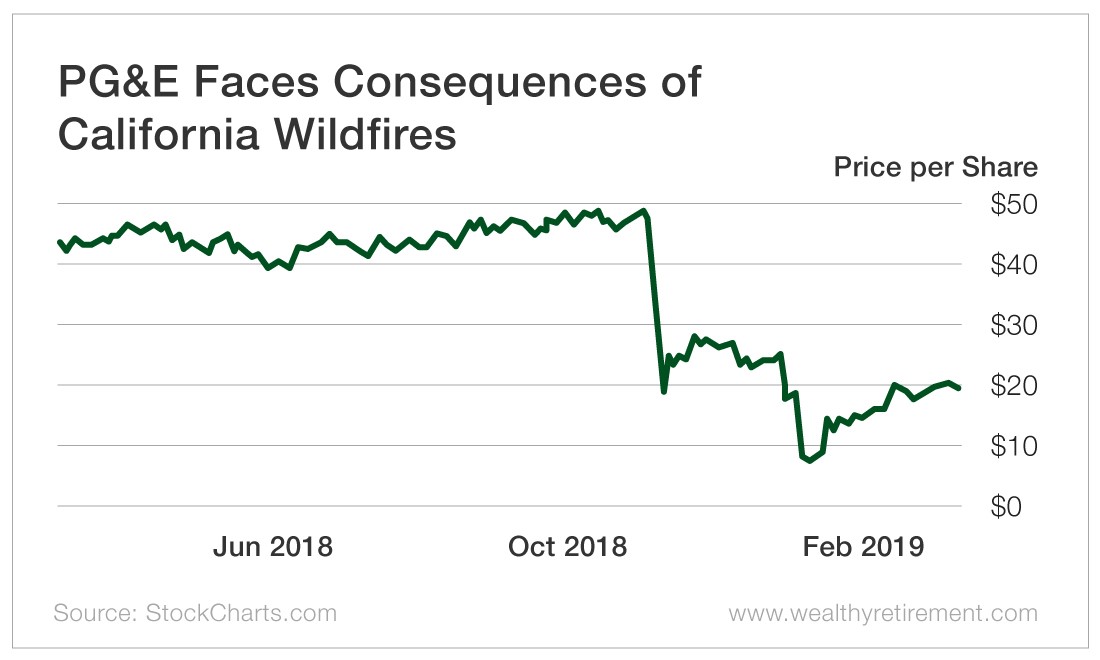 The lesson here continues to be what we preach here at Wealthy Retirement: Position size so that you are not exposed too heavily to any one company. Research all of the stocks in your portfolio. Thinking that certain sectors are immune to disaster is the fastest way to bankrupt your retirement plans.

When (and How) to Teach Your Kids About...

The Hidden Opportunities Your Broker Isn’t Telling You...

The Best Investment… Ever