You’ve heard me rant about this several times before…

While I love share repurchases as a tool to create shareholder value, I detest how the majority of publicly traded companies misuse them.

The bungling of share repurchases has never been more rampant than it is right now.

It’s also a huge increase of 130% from the $101.8 billion worth of share repurchases that were logged in the third quarter of 2020.

Now, let’s think about this for a minute…

In 2020, S&P 500 companies were much more conservative with their share repurchases.

The economy was scary, so they sat on their cash.

In 2021, business prospects have improved and companies are buying back stock hand over fist.

What they aren’t thinking about is price…

Instead of buying low, they are buying high.

They are doing the exact opposite of what smart investors do. 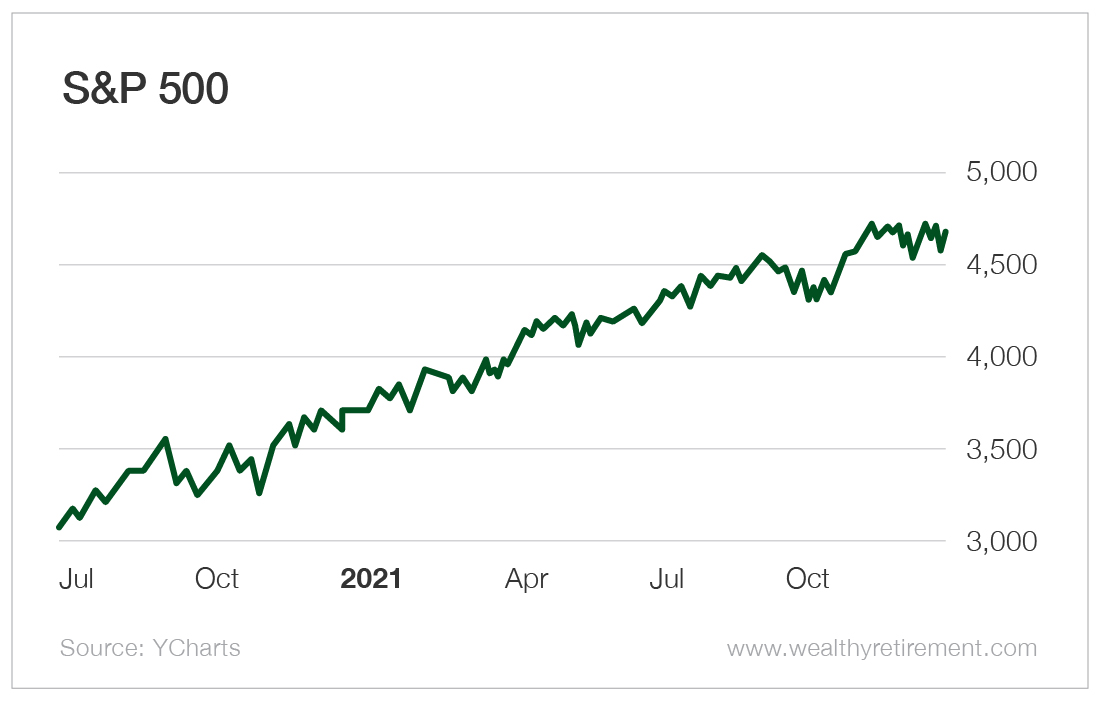 The index has gone straight up from there.

The companies that make up the index repurchased $101.8 billion worth of stock in the third quarter of 2020.

At these much higher prices, management teams of S&P 500 companies more than doubled their rate of share repurchases to $234.6 billion.

Why not accumulate cash when share prices are high? That way, companies have dry powder to repurchase shares at lower prices during the next stock market swoon.

It frustrates me beyond belief.

But management teams are doing something that upsets me even more…

They are personally selling shares given to them by their own companies through generous option grants.

As share buybacks hit record levels in the third quarter of 2021, insiders dumped their holdings at an all-time fast pace.

Year to date, insiders have sold a record $69 billion worth of stock.

Management teams and corporate directors are selling shares at all-time high valuations and having the companies that they run for shareholders buy back said shares.

I don’t know whether this should be called negligent or criminal.

But I know that it’s ridiculous.

At the start of this year, I went out on a limb and predicted that Warren Buffett’s Berkshire Hathaway (NYSE: BRK-B) would outperform the market over the next three years.

Berkshire has a slight lead over the market. 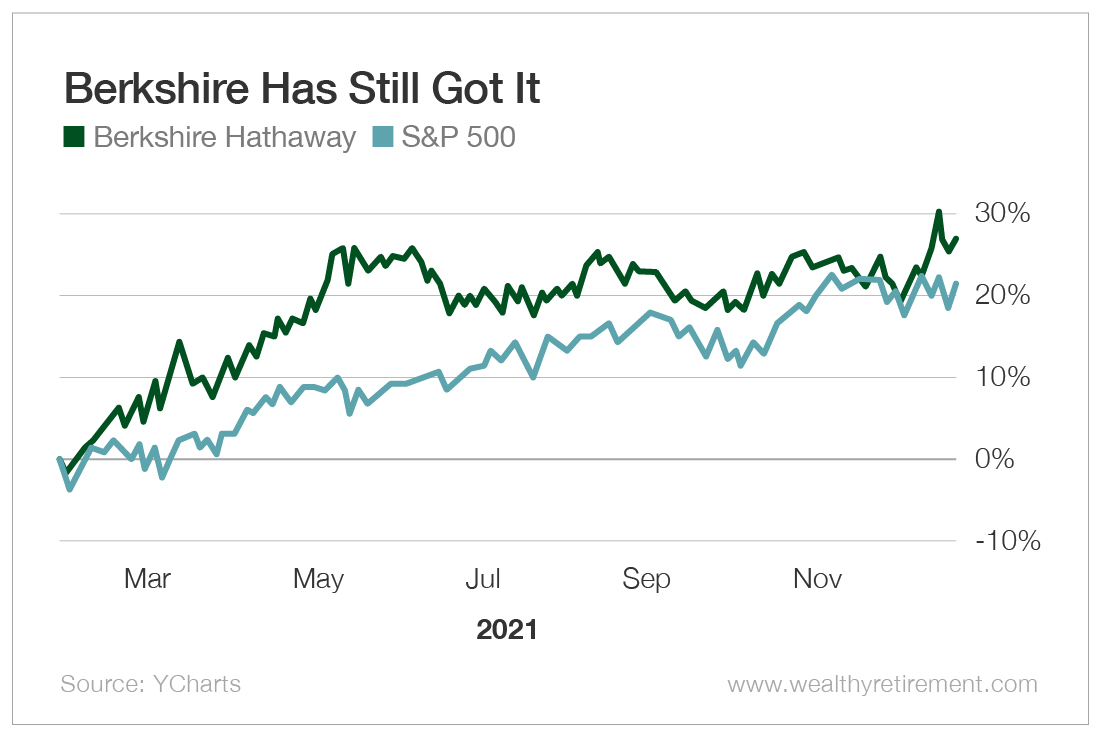 My reasoning for making this prediction was pretty simple…

Apparently, I wasn’t the only person who thought Berkshire was a table-pounding bargain.

Warren Buffett thought so too!

After buying back virtually no stock over the entire history of Berkshire – dating back to the 1960s – Buffett has had Berkshire spending billions repurchasing shares in recent quarters while the stock is at low valuations. 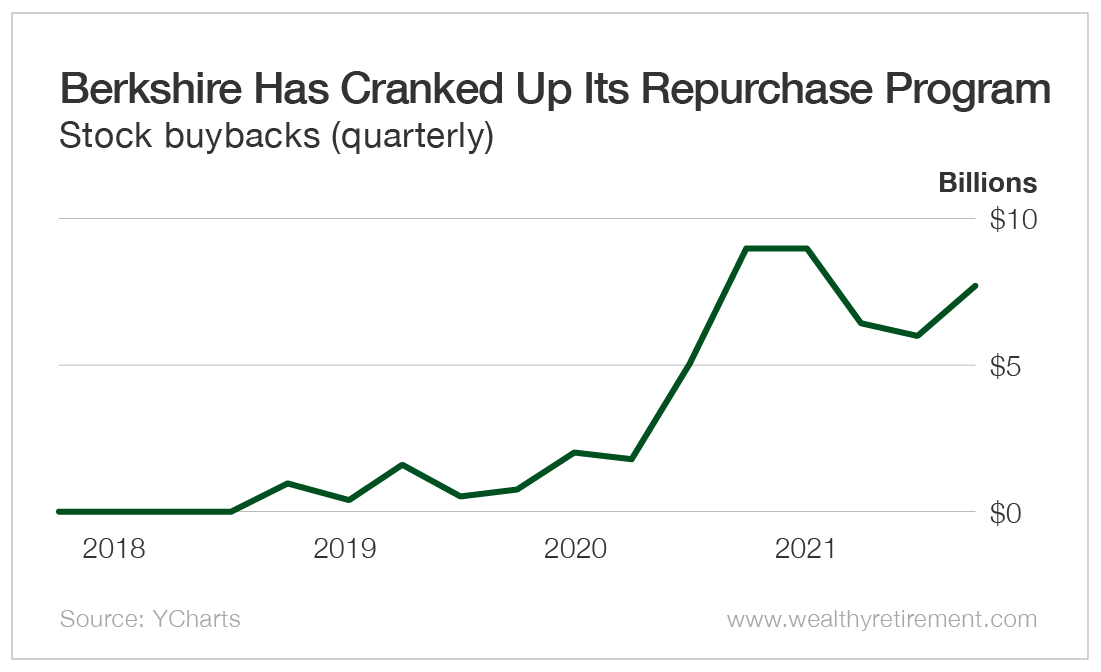 Through the end of the third quarter of 2021, Berkshire has repurchased more than $20 billion worth of its own shares.

Most years, Berkshire repurchases none.

Unlike nearly every other publicly traded corporation, Berkshire has a transparent policy on repurchasing shares.

Share repurchases can be made at any time that both Warren Buffett, Berkshire’s Chairman and CEO, and Charlie Munger, a Berkshire Vice Chairman, believe that the repurchase price is below Berkshire’s intrinsic value, conservatively determined.

Valuation is the foremost consideration at Berkshire when it comes to repurchasing shares.

I guarantee that when Berkshire gets more expensive, Buffett will stop buying back stock.

Buybacks are great when done right, like what Berkshire is doing.