Some people believe that Bitcoin will transform how money will work in the 21st century and beyond.

With central banks printing money like wild across the world, I understand the appeal.

Like gold, Bitcoin can’t be manipulated by those central bankers.

There is a limit on the number of Bitcoin tokens that will ever exist – 21 million, to be exact. Nobody can print more of it.

That scarcity Bitcoin offers is the core component of any argument on why it should have enduring value.

The value of paper money can be printed away. That is the one advantage that Bitcoin will always have.

I’m agnostic as to what the future will bring for Bitcoin. I don’t know whether it will last.

But what I do know is that Bitcoin is underpinned by a revolutionary technology based on carefully constructed principles set out in a white paper written by the mysterious Satoshi Nakamoto in 2009.

There was structure and science behind the Bitcoin movement.

The founding of Dogecoin, meanwhile, had none of that…

Dogecoin is a joke – and I mean that literally!

Dogecoin is a digital coin with a picture of a dog on it.

The dog is a shiba inu breed, and the picture that Dogecoin uses comes from an internet meme called the “doge meme” that had its five minutes of fame in 2013.

The doge meme was just silly fun. It paired a picture of a shiba inu with broken-word captions that were meant to depict the dog’s internal monologue.

Here is a sample… 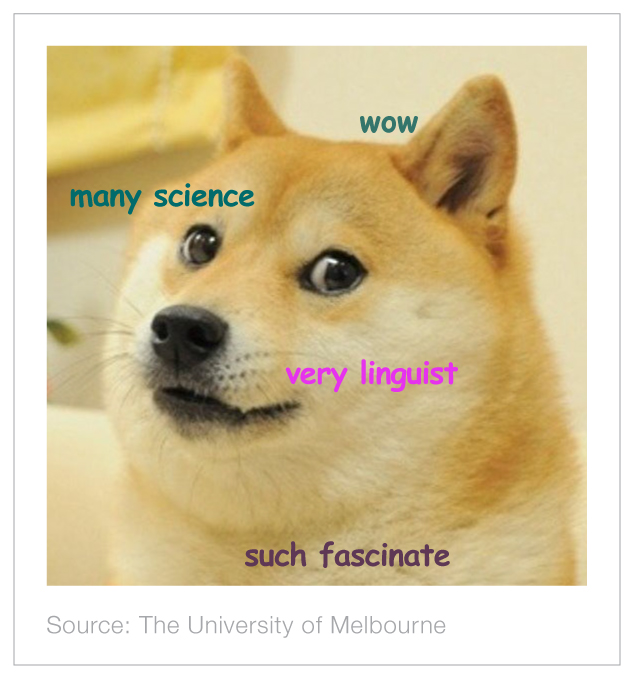 It doesn’t do much for me, but lots of people apparently liked it.

At the peak of the doge meme’s popularity near the end of 2013, an Australian marketer named Jackson Palmer decided to make a simple joke.

He took two of the internet’s most popular subjects – the doge meme and cryptocurrency – and combined them.

Palmer tweeted, “Investing in Dogecoin, pretty sure it’s the next big thing!”

His tweet hit the exact right moment and went viral.

For fun, Palmer kept the joke going by buying the Dogecoin.com domain name for a few bucks and uploading a photoshopped picture of a shiba on a coin.

It was a ridiculous prank not meant to harm anyone.

Eventually, he was approached by a partner who helped him launch his joke cryptocurrency.

Then, the trading price of this meme-based crypto exploded higher in 2021.

Dogecoin now has a market value of more than $74 billion…

A lucky person who bought $10,000 worth of Dogecoin last year is now sitting on a profit of more than $1.6 million. 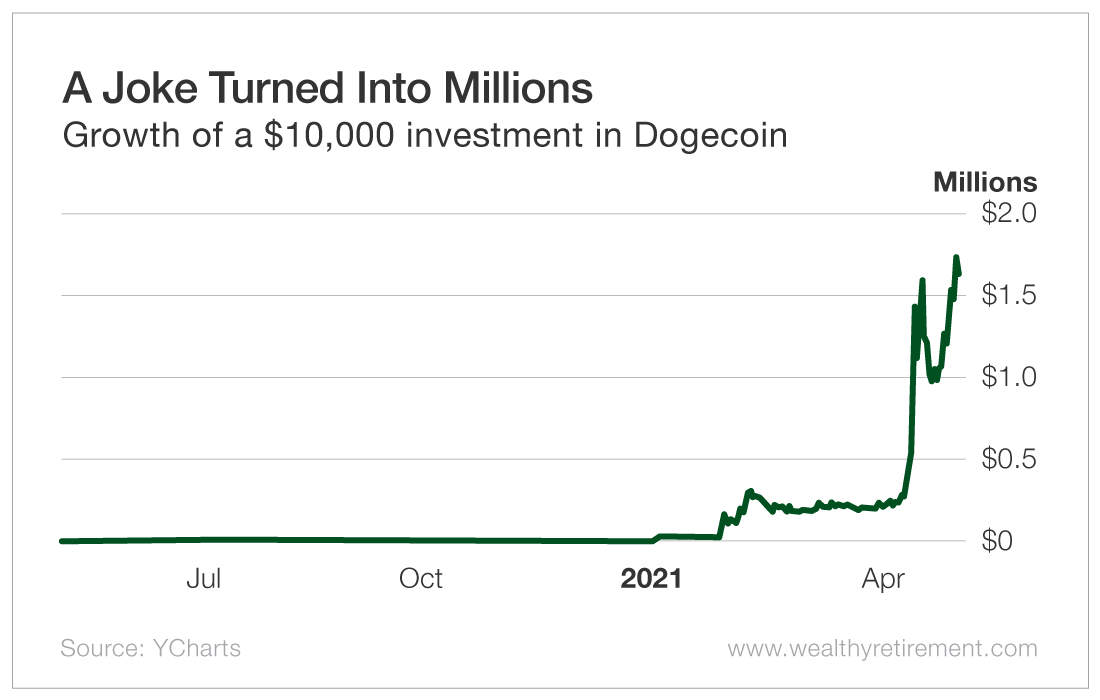 My take on this is pretty simple… What has happened with Dogecoin is utterly ridiculous.

Dogecoin will end badly for people risking their hard-earned money on something that I don’t feel “speculative” comes close to describing.

Dogecoin has all of Bitcoin’s weaknesses. It is worth only what other users are willing to pay for it, it isn’t backed by any asset or business, and it won’t ever produce any income.

But it doesn’t have Bitcoin’s one undeniable core strength: a permanent limited supply.

Much of the fuel for the Dogecoin price explosion has been supplied by pro-Dogecoin tweets from Tesla‘s (Nasdaq: TSLA) Elon Musk.

Of course, Musk was also tweeting in support of GameStop‘s (NYSE: GME) Reddit investor-fueled surge back in February, when I warned readers to stay far away.

While Musk might make some cool cars, I’m very certain that he isn’t worried about whether people following his tweets lose all of their money.

Jackson Palmer, who created Dogecoin, never believed his cryptocurrency was anything more than a joke.

He sold off all of his coins six years ago after he was laid off from his job.

In his words, his profits from selling at that point provided “about enough to buy a used Honda Civic.”

Too bad for him, but nobody could have predicted what happened to Dogecoin in 2021.

I have a prediction for what will happen to Dogecoin from here, though, and it isn’t pretty for people risking their money on it…

Cryptocurrencies may be part of our long-term future, but betting on one based on an internet meme of the internal monologue of a dog is not the way to play it.