To learn more about the changes that are about to rock the energy sector, take a look at Energy and Infrastructure Strategist David Fessler’s new best-selling book, The Energy Disruption Triangle: Three Sectors That Will Change How We Generate, Use, and Store Energy.

This week, we asked Wealthy Retirement readers how they plan to spend the upcoming July 4 holiday – specifically, whether they have any plans to travel and which modes of transportation they are using to reach their destinations.

A slight minority of our respondents indicated that they plan to travel over the July 4 weekend. 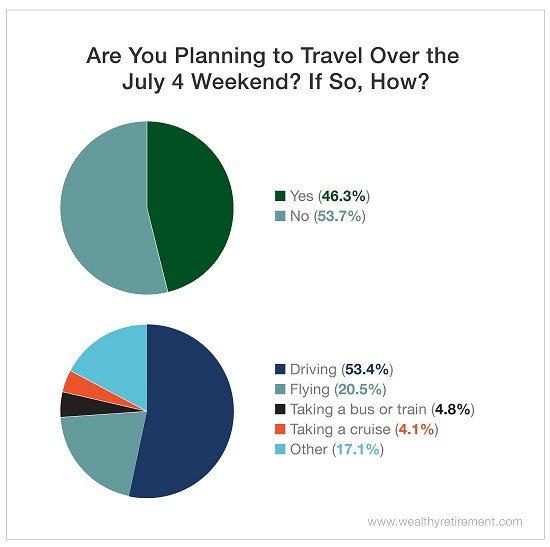 Of those respondents, the more than 53% who will be hitting the road by car or bus will bear special witness to one of the market’s most notoriously volatile actors: the fossil fuel industry.

Oil prices are known for their summer peaks and news-driven fluctuations, and it’s common practice to bemoan what seem like infinitely rising prices.

However, the truth is that when adjusted for inflation, gas prices over the long term have been consistently shrinking – and have actually varied by less than $0.15 since 1980. 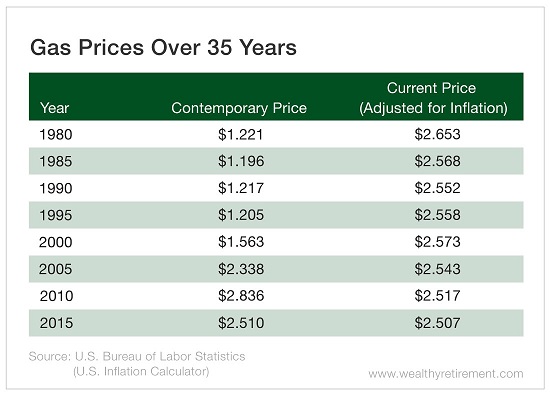 This stands in stark contrast to the wildly fluctuating value of crude. Over the past 10 years, it has experienced steep drops. Worse, it never fully regained its 2011 peak. 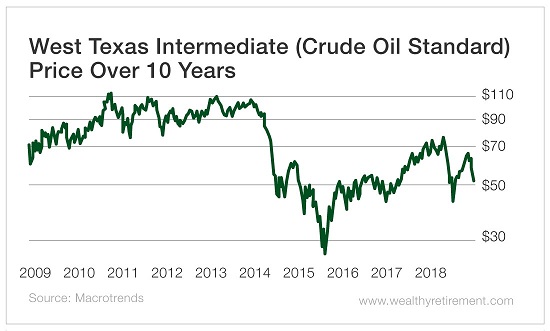 Compounding this discrepancy between profit and value is oil’s tendency toward waste. It is estimated that of all the oil and natural gas found in the United States so far, at least 75% has been wasted.

Recurring energy crises and disappointing returns are hallmarks of this industry. Long-term projects rarely produce as much as promised, and our dependency on oil has completely redefined our foreign policy with several countries.

This industry’s finances, like its environmental impact, are unsustainable.

Energy sector stocks and commodity master limited partnerships (MLPs) were once considered steadfast investments guaranteed to provide reliable income. (A select few still consistently deliver for their investors, but it takes a practiced eye to find them.)

However, of the 37 energy stocks currently rated by SafetyNet Pro, only four have a dividend safety grade above “C.”

Once upon a time, during the early days of American crude, Texan oil abundance benefited U.S. global positioning so much that oil prices worldwide were standardized to those of the Gulf of Mexico.

Today, profits and cash flow have dropped across a sector that is, according to the Institute for Energy Economics and Financial Analysis, “weaker than it has been in decades” and under threat from accountability efforts and divestment campaigns.

The part that stings is that these attacks on the industry come from the biggest names in health.

According to Harvard Medical School, 97% of Americans age 65 and older have increased risk of premature death due to air pollution. (Pollution that meets the Environmental Protection Agency’s current air quality standards, no less.)

The amount spent nationwide on offering healthcare to these people negates the profit this industry provides, even from a solely financial perspective.

Considering 6.1 million lives are lost every year to air pollution and only 5% of us live in areas where the air is fully safe to breathe, it should come as no surprise that the World Health Organization, American Medical Association and American Heart Association have all declared fossil fuel burning a public health emergency.

In other circumstances, no investment performing this poorly would receive this much continued support. However, many fossil fuel investors are doubtful about the viability of the alternative: renewable energy.

Investors will be reassured to learn that historically, eliminating fossil fuels from an investing portfolio actually leads to a performance improvement, albeit small.

We know that demand during the summer months pushes prices higher as travel increases. Not to mention the degree to which sanctions could spur even more fluctuation in the near future.

Whether you’re taking to the road or containing your Independence Day celebrations to your own backyard, consider celebrating by taking a good look at the opportunities that await in renewable energy.

There’s No Magic in the Market