Biotech is one of the riskiest sectors – but it’s also one of the most profitable.

As an investor, it’s important to keep the necessity of these companies’ products in mind. Healthcare will always be a priority – so when one company hits a hurdle, rest assured another will clear it.

In every fast-paced development, someone will profit. To be a successful investor, it’s imperative to spread your risk, keep track of fundamentals and understand the industry.

After all, the connection between progress and profit in healthcare is strong.

According to the Centers for Medicare and Medicaid Services, prescription drug spending increased by 4,381% between 1960 and 2000. It sits at $360.3 billion today.

Many prescription drug users bemoan the price hikes – but it’s also true that the increase, spurred by new technologies, has made healthcare a lucrative field for investors.

Out of the 39 portfolios offered by Fidelity, for example, the Select Health Care Portfolio, the Select Medical Technology and Devices Portfolio, and the Select Biotechnology Portfolio have been top performers.

They’ve nabbed the second-, third- and seventh-most profitable annual returns over the lives of the funds. Over the past 10 years, this has translated into 18.58%, 18.32% and 17.73% gains, respectively.

To produce massive gains like these, the biotech space has to be cutthroat: Only 13.8% of proposed drugs make it through the approval process.

Biotech investors should be just as discerning. With this in mind, we asked our readers to share what news about a healthcare investment would most concern them. 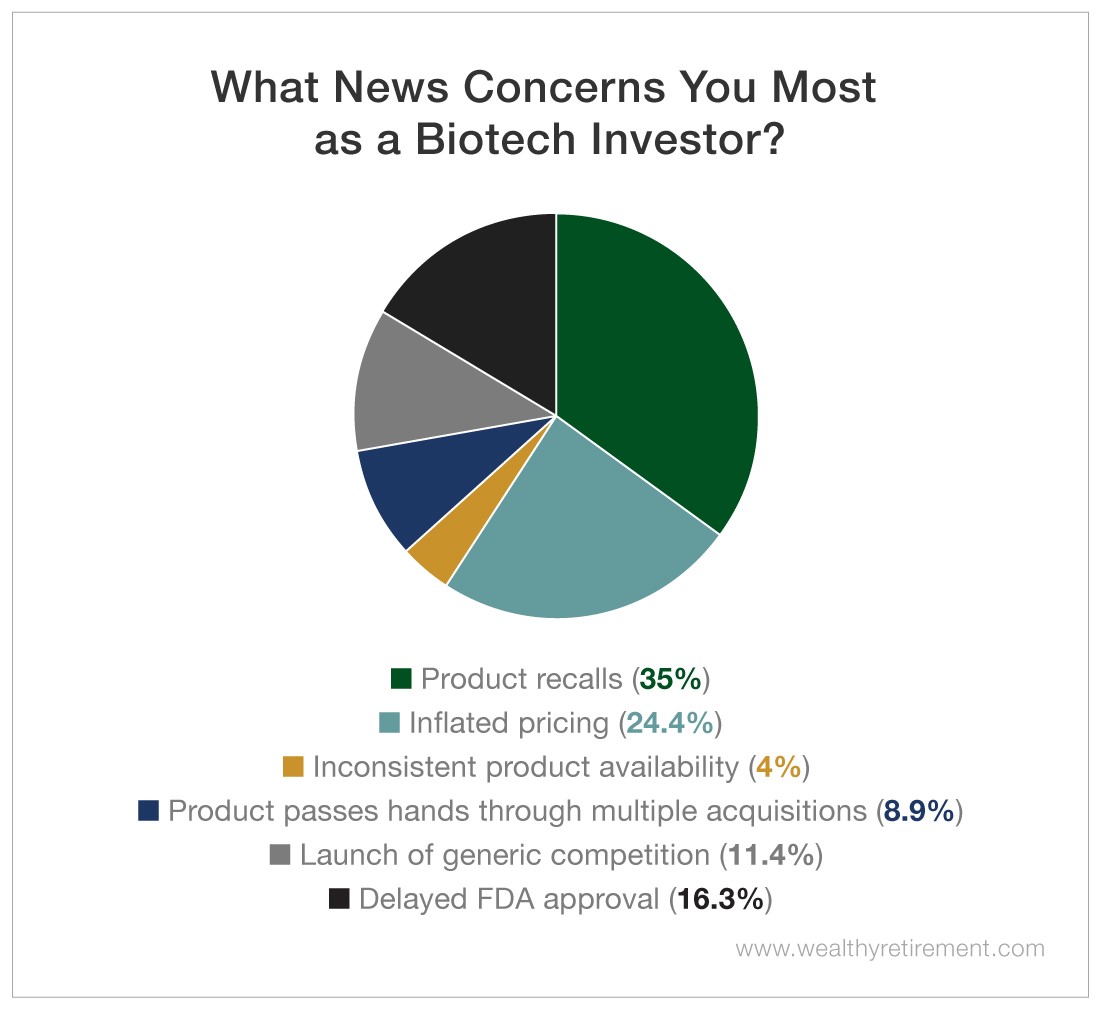 The majority of our respondents said that product recalls and inflated pricing would worry them most. Almost 30% were concerned with delayed approval and generic competition.

Their misgivings are well-founded: In the biotech space, downturns like these could cost an investor their entire principal.

Each time a company struggles, though, another rises to the challenge. Many of our readers have seen this firsthand.

Ongoing Challenges for Patients and Investors

We asked readers to share the names of their most expensive prescriptions.

At some point, the manufacturers of nearly every one mentioned caused investors a headache or two (and gave competitors a chance to shine).

EpiPen once had its share of good press. Its current owner, Mylan (Nasdaq: MYL), lobbied until the product was legally required to be present in schools.

However, now Mylan is taking a turn for the worse. A series of setbacks culminated in a 3.3% one-day loss this Wednesday, sending its stock price down to $18.58.

Over the years, investors have had plenty of temptation to hop off the wagon. In fact, the EpiPen has faced every piece of bad press we asked our readers to weigh.

At times, the drug took setbacks that could kill similar products in stride – but in the face of some of these setbacks, it was a generic competitor that stole the show.

The Course of True (Progress) Never Did Run Smooth

The EpiPen (and its many custodians) ran into every hurdle possible. Sometimes, Mylan came back stronger for its woes. Other times, a competitor profited from the damage.

Case in point: On Wednesday, Bloomberg reported that the shortage of EpiPens has become even more urgent. Medical giant Novartis (NYSE: NVS) will step in to fill the gap with its generic, Symjepi.

This was the impetus for Mylan’s dip in stock price. Novartis has been poised to capture more of this market since last summer when its device was approved.

Novartis was tempted to sell its Sandoz generics business last year, but usurping Mylan could provide a necessary boost.

One piece of news can take a healthcare investment to a new norm in a single day. That’s what makes the biotech space so volatile – and so fascinating.

Biotech stocks are infamous for turning the tables. However, seeking out industry insight from experts (like Marc Lichtenfeld) who live and breathe the sector can teach you to think two steps ahead.

With thorough research, you can find the winner in every tangle – and ensure that you come out on top.

Why You Should Plan Your Own Funeral