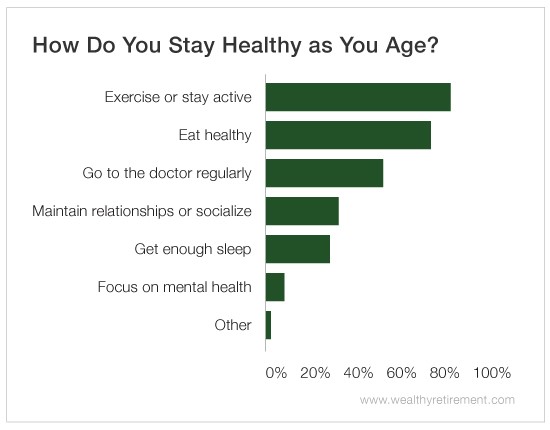 When you think of being healthy, you likely think of kale salads and daily bike rides.

But good health is about more than the physical – it’s also about the mental.

Yet many of us seem to forget that. In fact, according to our recent survey, only 1 in 10 of our readers prioritize their mental health when it comes to overall well-being.

That’s likely because it’s a taboo subject – something most people aren’t comfortable discussing. Similar to the way we shy away from talking about money or sex with our kids, we don’t like to bring up our struggles with anxiety or loneliness because of the stigma associated with those sorts of issues.

However, poor mental health is a major problem in retirement – about 15% of Americans over the age of 65 suffer from depression, and suicide rates are the highest for that same age group. Statistics like these are scary – but also understandable when you realize that retirement is deemed the 10th most stressful life event.

And not only does your mental health affect the quality of your golden years, it could also cost you big time… literally.

A Health Economics study found that people who have depression or anxiety are 25% less likely to have any retirement savings at all. And even those who do have some money stashed away often aren’t as successful at growing that nest egg as people who are in good mental health. They typically have about 67% less in assets than their healthier counterparts.

So the next time you’re lacing up your shoes for a walk or swapping french fries for a salad, pat yourself on the back – and then make sure you’re putting as much effort into maintaining your mental health too. Exercise your brain (think: reading or learning a new hobby), socialize with friends regularly and, if you’re really concerned, talk to your doctor.

After all, healthier equals wealthier.

Mix Up These Investment Strategies for a Profitable Cocktail

How Much Does It Take to Retire?

How to Activate Your “Plan B” Retirement

Will Your Nest Egg Last?