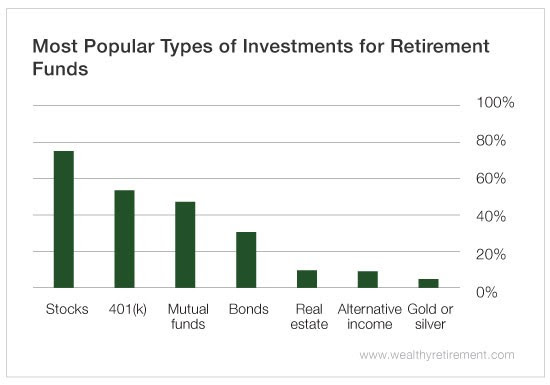 This week, we asked our readers where they invest their retirement savings.

And the results were, well, just as we expected: Most people buy stocks. That’s not exactly a newsworthy revelation…

But what surprised me was how few people were putting money into a 401(k). Since we all know the employer-matched accounts are essentially free money, I was confused.

Are people just not aware of the benefits of a 401(k)… or is there something else going on here?

So I decided to dig a little deeper. My sleuthing began by breaking the results down by region (Northeast, Midwest, South and West).

And what I found was shocking.

In the Northeast, 82% of people are investing in a 401(k) compared with about 50% of the rest of the country’s population.

That’s a significant difference. And after some research, I learned that there are two primary reasons for this.

First, state income taxes in the Northeast are, on average, notoriously higher than they are in other parts of the country, particularly in the Midwest. By putting money into a traditional 401(k), you can avoid paying some of those lofty taxes (until it’s time to withdraw during retirement, of course).

The other reason why people who live in the South, Midwest and West have lower 401(k) participation rates is that they often don’t have the same access to the plans that Northerners have. According to a Pew study, the South has some of the lowest 401(k) access rates; Florida, Texas and Louisiana have some of the worst access rates in the country.

It isn’t just about having access though – it’s also about choosing to actually invest in a plan. For example, the Midwest has access rates that rival (and in some cases are even higher than) the Northeast’s. Yet the participation numbers are still lagging.

The key takeaway here is that where you live can greatly impact your retirement savings plan.

Obviously, maxing out your 401(k) contributions is never a bad idea. But other factors (like lack of access to a plan, special tax laws or high costs of living) could make your portfolio look a little different than someone’s who lives on the other side of the country.

The one common denominator, though, is diversification. Always be sure to have a healthy mix of stocks and lower-risk holdings like bonds.

That’s important no matter where you live.

So as a North Carolina native who often resents moving north (sweet tea and hush puppies will always have my heart), I feel a little better about my current home away from home.

It might not have those mild Carolina winters or college football Saturdays… but at least it has a good retirement plan.

How to Save Money on Airfare

Charitable Giving: How to Support the Causes That...