In one year, crime and child mortality rates plummeted, humpback whales escaped endangerment, a breakthrough surgery offered hope to patients with multiple sclerosis, and the stranded passengers of US Airways Flight 1549 were successfully rescued from the Hudson River.

The period between 2008 and 2009 held more than its fair share of joyful news, social progress, and advances in medicine and technology. However, for many Americans, those years still conjure up one dominant memory: the Great Recession.

The effects of the financial crisis continue to shake investors’ confidence in their investment accounts and retirement plans.

Case in point: When we asked Wealthy Retirement readers if they had recovered from the financial crisis, less than half of respondents indicated that they had fully rallied. Eleven percent admitted that they may never recoup their losses.

This week, we asked readers about their most difficult financial learning experiences – many of which stemmed from the 2008 and 2009 crash. 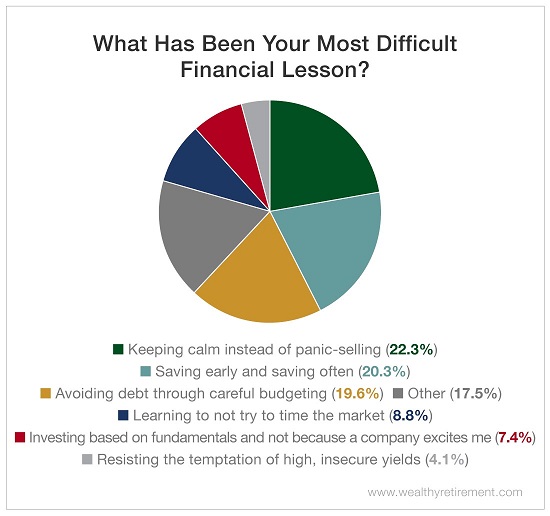 The most common lessons learned were in panic-selling, neglecting or postponing saving, and taking on debt from an incomplete budget.

However, many readers also wrote in to share personal struggles to “keep up with the Joneses.” Others noted mistakes such as trying to time the market, investing emotionally or falling for the temptation of high yields.

For many of our readers, these learning experiences were constructive – 36% of respondents reported feeling very confident that they could withstand a future downturn. 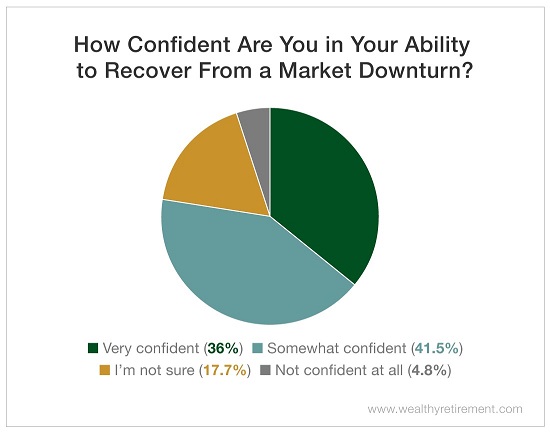 However, 41.5% reported feeling only somewhat confident, while just under one-fifth were unsure. About 5% of our readers did not feel confident at all in their ability to recover from a financial emergency.

Even for some of these respondents, though, a 2015 study by Vanderbilt suggests that there’s a way to bounce back.

Researchers found that committed goal setting and excitement about the future can help prevent making the same mistake twice (for example, losing your cool during the next recession).

Instead of trying to keep up with your neighbors, prioritize spending to reflect your values and resist the urge to splurge. Thoroughly research the companies that excite you and keep a careful eye on those that promise high yields.

Instead of fixating on previous financial hiccups, establish trailing stops, automatically withdraw savings each month and consult a fiduciary advisor for help crafting a comprehensive budget.

Small corrections like these can pay off in the long run – just ask those who resisted the urge to panic-sell during the Great Recession and instead bought at the 2009 dip. They’re currently up 30%.

Don’t let a past blunder keep your money on the sidelines. In the long run, it’ll be your costliest mistake yet.

Some things from 2008 and 2009 have stood the test of time – Uber, Airbnb and wearable fitness trackers, for example…

Don’t let fear be one of them.

Pride Comes Before a Faltered Trade

You Can’t Collect It if You Don’t Protect...

A Taxing Time for Estate Planning

Downside Protection for Your Retirement

Your First Investment of 2020