Home Market Trends The Energy Companies No One Is Talking About

written by Mable Buchanan Saturday, May 9, 2020

In April, heartbroken energy investors watched as the price of oil collapsed, reaching a loss of more than 55% year to date.

Then, the market added insult to injury as the price of crude dropped below $0.

Today, the commodity trades for $24 per barrel.

Not long ago, it was valued at nearly three times that price. 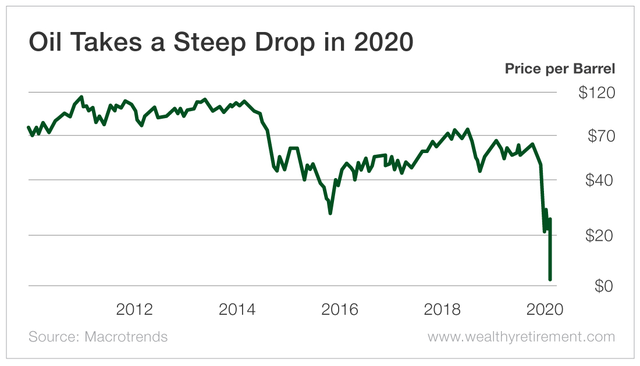 Efforts on the part of OPEC, and Saudi Arabian production in particular, to flood the market with oil have been blamed for this drop in demand.

But on Wednesday, this notoriously volatile market began showing signs of life.

(Though, according to Barron’s, storage for the excess still remains a concern, so this may not spark the sudden rebound many energy investors hope for.)

Still, eager investors in this rough-and-tumble oil market shouldn’t get ahead of themselves. The past several months have proved the disruptive power of crude price fluctuations.

The fallout has led some of the biggest players in energy to take what may be insurmountable blows to cash flow, as we saw in this week’s Safety Net.

That said, forward-thinking energy investors should carefully consider how they want to play crude’s eventual recovery.

For investors who won’t tolerate volatility but are unwilling to leave fossil fuels behind, it will be important going forward to get very selective.

Then, oil tanked. Between 2014 and 2016, investors grew disillusioned with the sector. Though it posted a modest recovery until this April, the sector never regained its former glory.

But alternative plays on the sector may offer a way for investors to “think differently” when it comes to investing in energy.

This vehicle is not tied to underlying commodities, like the prices of natural gas and oil.

MLPs fall into a variety of categories, like gathering and processing or pipeline transportation for oil or natural gas.

MLPs hold Big Oil companies as clients on long-term contracts, such as for the use of pipelines.

They are required to pay out distributions, much like real estate investment trust (REITs).

As a result, MLPs are uniquely tax-advantaged. Their distributions are considered a return of capital, and as a result, they lower an investor’s cost basis.

These companies fell along with the broader oil sector in 2014, likely due to dwindling investor sentiment with energy.

Big Oil’s lessened commitment to long-term contracts and some MLPs’ overeager distribution growth just before the downturn were also to blame.

However, because MLPs as a whole are less correlated to crude prices, they held up better than Big Oil at the beginning of the downturn in 2014 and showed less volatility overall. 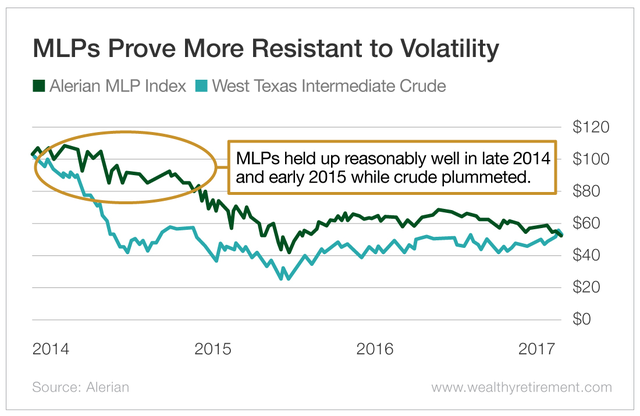 During today’s collapse in oil, investors can take comfort in the fact that MLPs have stronger balance sheets now than they did in 2014.

This is thanks to their efforts at decreasing debt and cost of capital and increasing distributions, according to Barron’s.

Investing in high-quality, less-correlated MLPs can be a safer alternative for investors who want to stay in the sector.

Regardless of whether you choose to invest in MLPs, it’s important to remember the value of diversification.

Energy can be an important part of your portfolio, especially when played safely.

In recent years, the energy sector as a whole has been taking it on the chin.

However, with a little creativity, investors can still achieve the solid and high-yielding income streams they value.

In the meantime, they’ll be paid to wait for crude to recover.