Just last week, the U.S. Department of Labor announced that the annual inflation rate was a whopping 4.2%. The Federal Reserve, which until recently estimated that inflation would be 1.8% for the year, has been eating crow (more on this in a moment).

But The Oxford Club – and more specifically, Chief Income Strategist Marc Lichtenfeld – saw the writing on the wall a while ago.

In the September 2020 issue of The Oxford Income Letter, Marc said, “We’re at the beginning of several trends: an infrastructure boom, rising metal prices and inflation.”

Admittedly, analysts have been predicting an infrastructure boom since before former President Trump took office.

Of the three predictions that Marc made, the one regarding the infrastructure boom was the least surprising. That said, Marc’s timing was spot-on. Check out the surge in infrastructure since September… 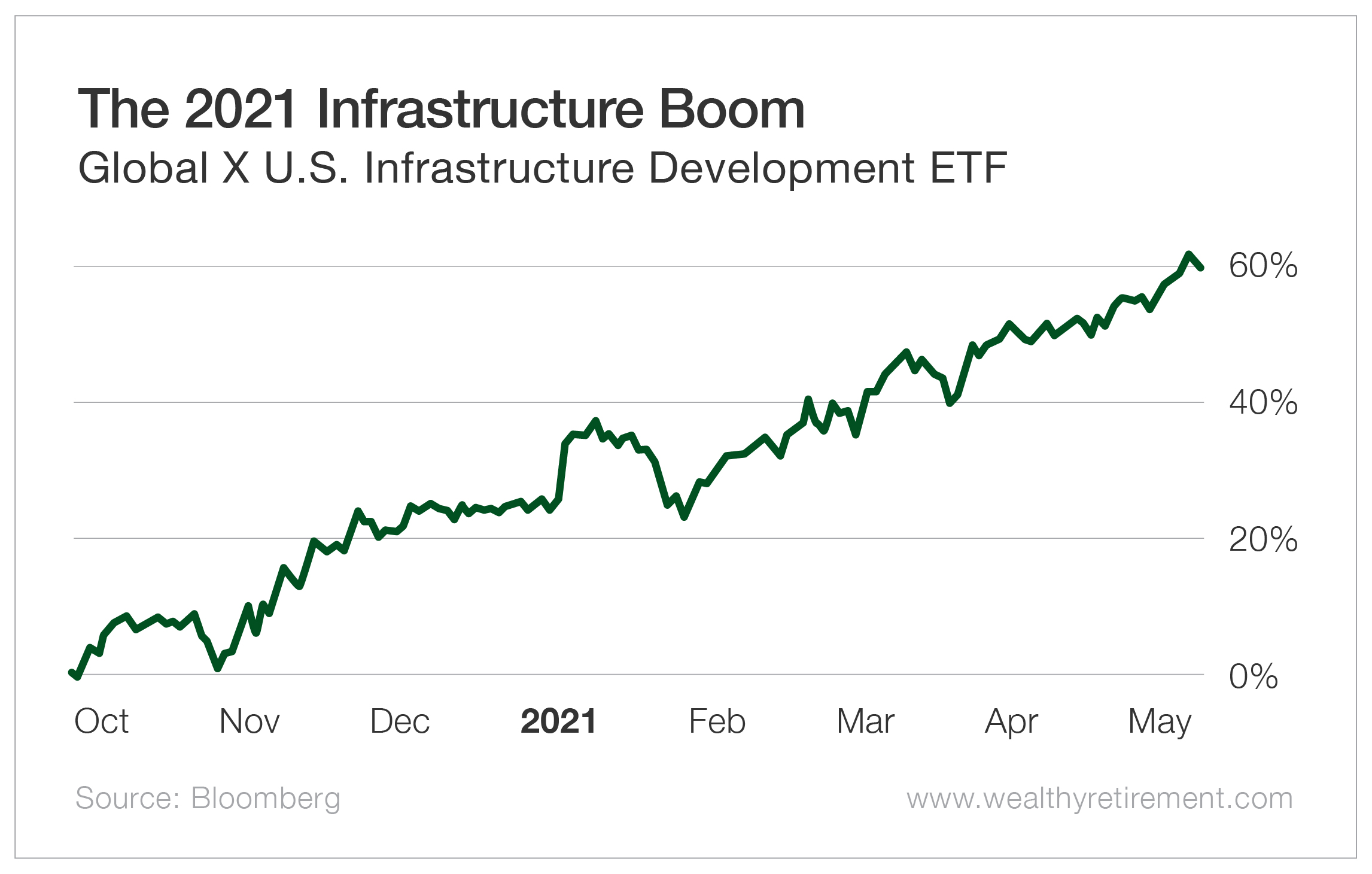 The Global X U.S. Infrastructure Development ETF (CBOE: PAVE) is up more than 59% since September.

In 2020, the prices of gold, silver and copper had spiked to their highest levels since 2013, but Marc thought they could go even higher. 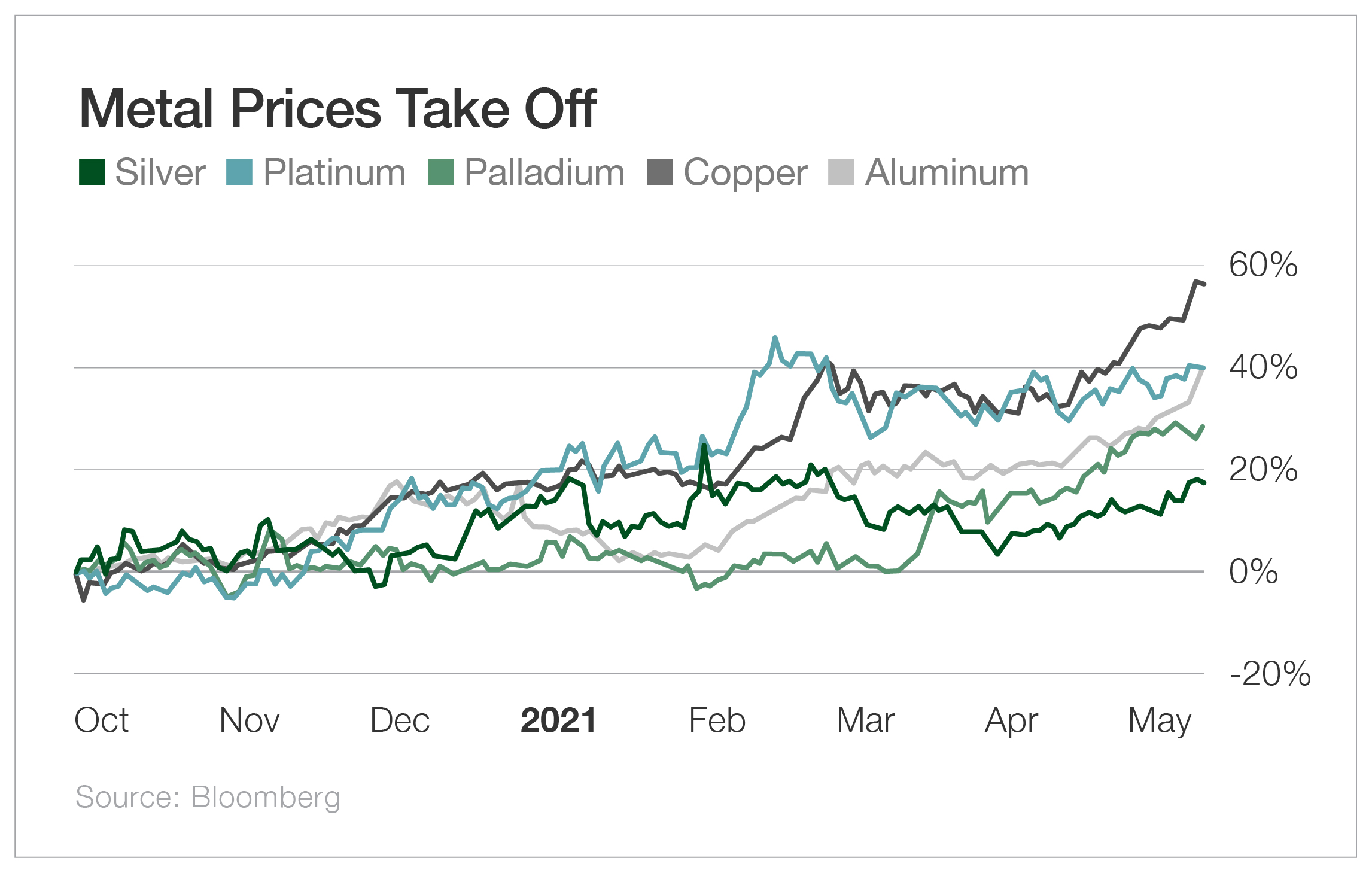 Since Marc’s prediction, gold hasn’t cooperated and is down around 3%.

In a recent call, Marc explained, “I’m not sure why gold isn’t participating in the rally. Perhaps Bitcoin is replacing gold as a store of value for some investors. But I think we’re in the very early stages of a big bull market in most metals.”

The boldest of Marc’s three predictions was the one he made about inflation.

In September, Marc said, “The risks of inflation are now unquestionably higher than they have been in decades. To ignore those risks would be a mistake.”

At the time, the Fed forecast 1.8% inflation for 2021. Hardly a number to lose sleep over.

Meanwhile, Marc was pounding the table that inflation would be well above 2%.

His argument was simple: Since 1914, the average historical inflation rate has been 3.2%.

It had to go up from there.

And boy did it…

As I mentioned, last week, the Department of Labor announced that the annual inflation rate was a colossal 4.2%. 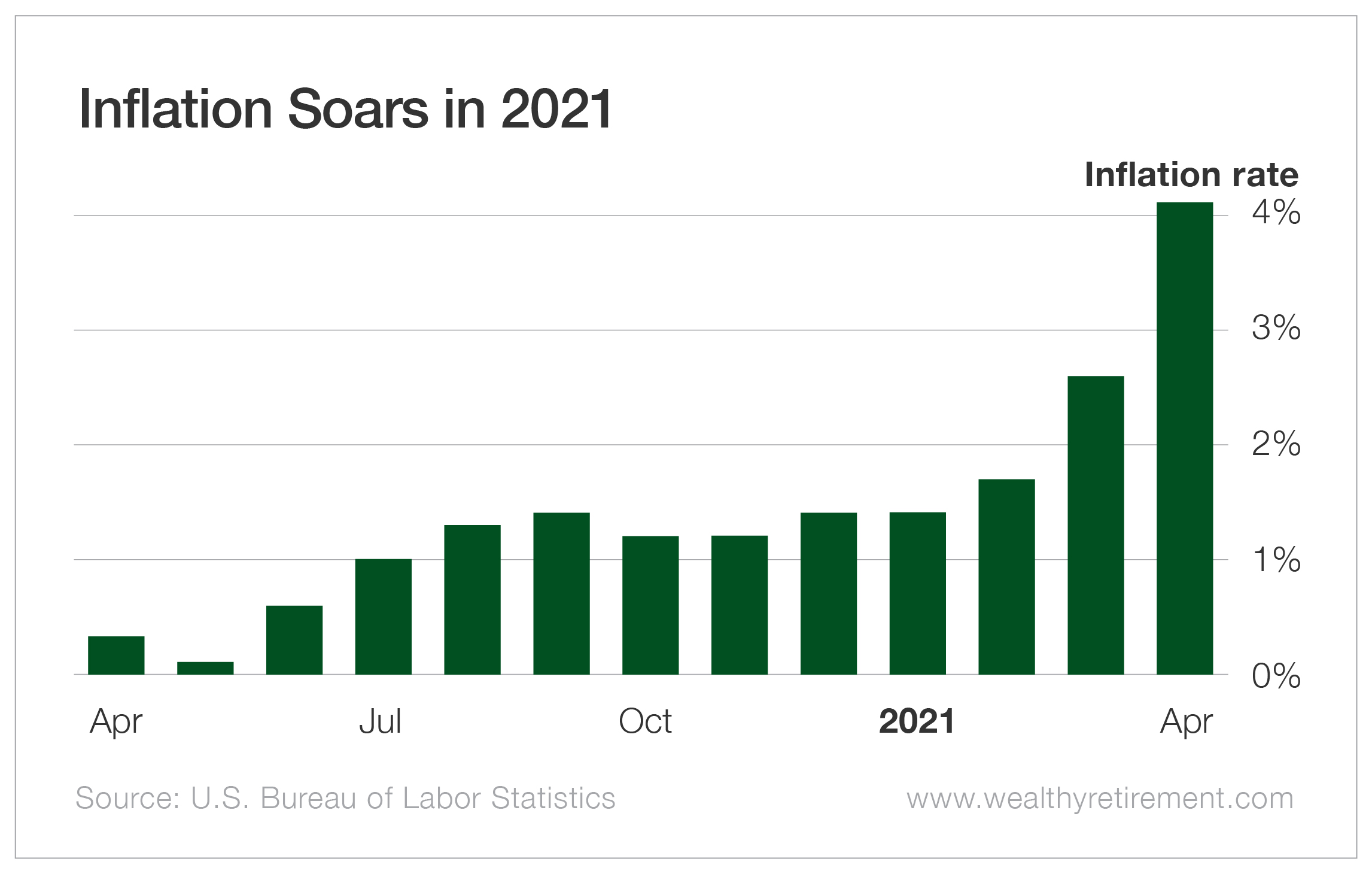 It was only six months behind Marc in admitting that we may be staring down the barrel of some daunting inflation numbers. (Though, it is the Fed… Is anyone really surprised it made a bad call?)

Marc’s predictions have panned out, so what now?

“The infrastructure, metals and inflation trends are just getting started,” Marc says. “Investors should add positions that will benefit from rising inflation, such as financials and commodity plays.”

Another way Marc is recommending combatting rising inflation is with cryptocurrency.

Luckily, Marc has found another way to get in on the white-hot crypto trend with a $9 “backdoor” investment opportunity.

There are many who believe that crypto – specifically Bitcoin – is a good hedge against inflation because of the finite amount of Bitcoin that exists.

Should crypto continue to be popular, owning the stocks of companies that serve the crypto industry (and can make money no matter which way crypto prices go) will be an excellent way to increase your buying power and stay ahead of inflation.

If you’re interested in combatting sky-high inflation and dipping your toe into the crypto pool, check out Marc’s newest research for all the details.