As a Canadian, I’ve spent almost all of my professional life working for businesses that pay me in U.S. dollars.

Early in my career, I was briefly taking my U.S. dollar paychecks and converting them into Canadian dollars at an exchange rate of 1.6 to 1. That meant that for every $1 I was paid, I was actually receiving $1.60 in my home currency.

For a young man just starting his career, it was fantastic!

Five years later in 2007 though, my currency bliss was gone.

Then, on the back of $100-per-barrel oil, the Canadian dollar was trading at a premium to the greenback. For each $1 I was paid in U.S. dollars, I received only $0.93 in loonies.

Despite receiving two promotions, I was making significantly less money in Canadian dollars in 2007 than I was in 2002.

Because of the financial impact that U.S. dollar movements have on me, I’ve studied the U.S. dollar more closely than virtually anyone I know.

What I can tell you after 20 years is that most of the time, predicting where it is going to go is exceptionally hard.

Every day, more than $5 trillion changes hands in the currency markets, and more than $4 trillion of those trades involve the dollar.

But I can tell you one thing with certainty…

When investors are afraid, it is easy to predict what the U.S. dollar is going to do. The more fearful investors are, the stronger the dollar is.

And when the fear subsides, so too will the dollar.

That is exactly what is happening today…

Economies Are Reopening… Fear of a Depression Is Gone

That week, I watched a movie with my kids, but I have no recollection of the plot. My mind was too busy thinking about how to keep my family safe if the outbreak got out of control in our city.

At that point, none of us had any idea what the next 18 months were going to look like. 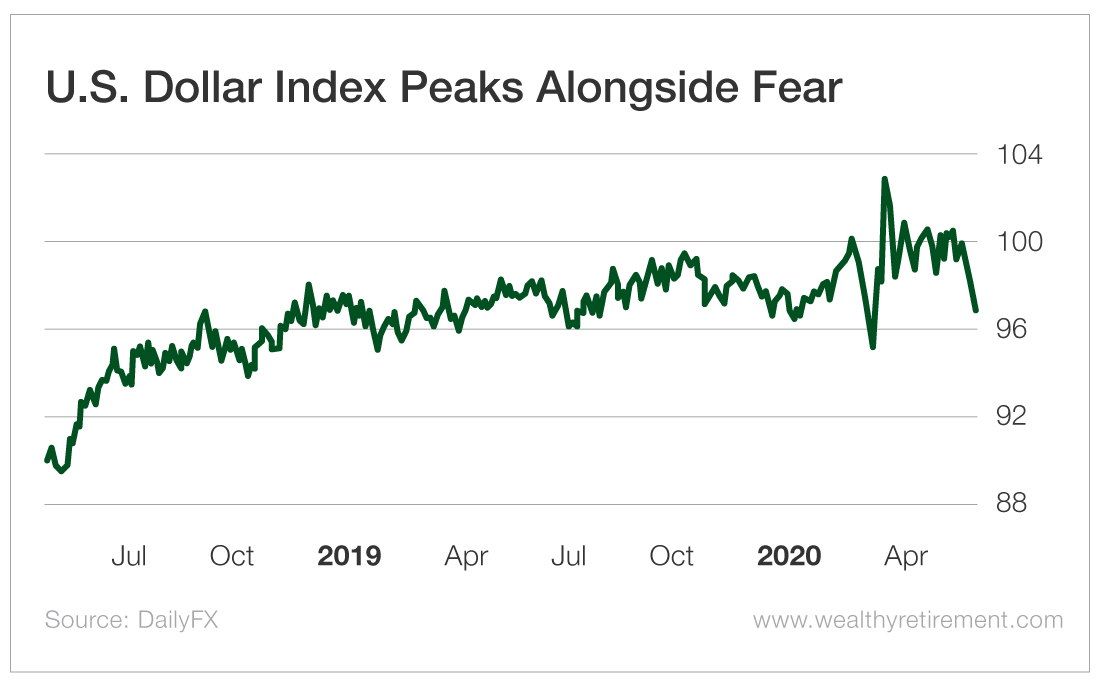 Since that point of maximum fear, the dollar has weakened as the truly worst-case coronavirus projections have been taken off the table.

The dollar decline was steady at first, and then it became much more rapid.

The U.S. Dollar Index now sits below 97, posting a sudden 3% decline over the past two weeks. Those numbers might not feel significant, but they are big moves in currency land.

But I thank goodness the dollar has weakened so quickly. It tells us that things are getting better.

Which Companies Benefit From a Weakening Dollar?

A strong dollar tends to push down commodity prices, slow growth in emerging markets, put a damper on inflation in the U.S., and make American goods and services less competitive in the global market.

This is because everything priced in U.S. dollars becomes more expensive as the dollar strengthens.

A weak dollar does the opposite…

If you are an investor who has exposure to the S&P 500, you are already a big beneficiary of a weakening dollar. Analysts estimate that somewhere between 40% and 50% of S&P 500 sales are from abroad.

Industrials: These companies make products that are used worldwide. As the dollar drops, their products become cheaper for international buyers. For example, Caterpillar (NYSE: CAT) regularly outperforms when the dollar weakens.

The U.S. dollar has already had a pretty big move in recent weeks, so it might hold steady for a while. Not to worry, though – if you hold a diversified portfolio of S&P 500 stocks, you’ve already benefited from the dollar’s recent move.