Last week, two of the most influential investors of this generation rattled the market with their pessimistic views of its outlook today.

Their opinions were not what most investors were hoping to hear…

Both gentlemen said that they were about as bearish on stocks as they have ever been.

Considering how respected these investors are, their dark view of the stock market got a lot of attention.

But the mainstream media missed some important details…

These Men Are Worth Listening To

Stan Druckenmiller and David Tepper are the two investors whose words rocked the market last week.

Druckenmiller is an absolute legend.

But the Druckenmiller story gets even better… Over that entire 30-year stretch of managing money, he did not have a single down year!

And David Tepper is no slouch either.

Tepper runs Appaloosa Management and is arguably the best-performing hedge fund manager of his generation. No joke, the man’s words alone move markets.

Tepper’s investing skills have resulted in a net worth of more than $12 billion and allowed him to buy the NFL’s Carolina Panthers for $2.3 billion in 2018. (Hey, everyone needs to spend a little of their savings on their hobby!)

Tepper and Druckenmiller are both billionaires because of their investing skills, and they are both very bearish on stocks today.

Last week, Druckenmiller spoke to the Economic Club of New York, saying, “The risk-reward for equity is maybe as bad as I’ve seen it in my career.”

This cloudy view from Druckenmiller can be attributed to his belief that a fast (V-shaped) economic recovery from this slump is unlikely.

Not to be outdone, David Tepper said something equally bearish on CNBC:

Tepper’s gloomy outlook is based on valuation.

He believes that the rally in stocks that followed our March lows has made the market richly priced relative to where corporate earnings will be.

You Can’t Paint Every Sector With the Same Brush

It would be foolish to not listen to what investors with long-term track records like these are saying.

So listen, but also critically analyze.

Druckenmiller and Tepper are sounding the alarm on the same thing I wrote to you about late last month: Against the current economic backdrop, the S&P 500 is expensive.

But we need to dig deeper here…

As I noted back in April, the S&P 500 is now dominated by large technology stocks. Never before has this index been this concentrated in just five stocks.

Those stocks have had great runs this year despite the terrible economy. No wonder David Tepper singled out Amazon, Facebook and Google as being great companies but clearly not cheap stocks.

Given that these companies now make up such a massive percentage of the S&P 500, simple math dictates that if these stocks are expensive, the market also has to be expensive.

Other areas of the market, however, are much more attractively valued.

Three areas that I have been encouraging you to look at in recent weeks are American banks, small caps and homebuilders.

The chart below shows how different the performance of these sectors has been relative to the large technology stocks, as captured by the MicroSectors FANG+ ETN (NYSE: FNGS). 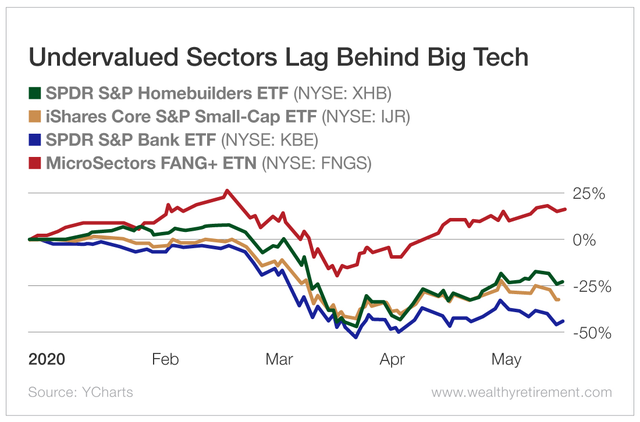 While the big tech stocks are actually having a great year (they are up 16%), the story is very different for homebuilders, small caps and banks (which are down between 21% and 42%).

To be clear, I am not suggesting that the companies in these sectors aren’t going to have terrible earnings over the next 18 months. It is going to be very tough sledding for some time to come.

What I am saying is that for investors willing to look beyond the next 18 months, the long-term earnings power of these companies hasn’t changed all that much.

When earnings start going back up in the second half of 2021, the stock prices of these companies will have to go a lot higher to properly reflect that.

Stocks or Bonds? Try the Best of Both Worlds