It’s not that common that I review a stock immediately after it has cut its dividend. But I’ve had a number of requests for this one, and it’s an interesting situation.

In its first quarter earnings announcement, Preferred Apartment Communities said it is reducing its quarterly dividend to $0.175 per share from $0.2625.

This is the first time Preferred Apartment Communities has cut its dividend since it began paying one in 2011. In fact, it had raised the dividend every year since then and often did so multiple times per year.

But in the age of COVID-19, rents aren’t getting paid.

The good news is Preferred Apartment Communities’ grocery store tenants (which anchor some of its properties) had all paid their April rent as of May 11, when the company reported results.

However, only 66.7% of other retail tenants wrote a rent check in April, down from 96% in March and 99% in January and February.

All other tenant categories showed rent payment levels over 90%.

The current economic and health crisis will likely result in lower funds from operations (FFO), which is the measure of cash flow used by real estate investment trusts like Preferred Apartment Communities.

The company’s FFO had been steadily climbing, but now it is projected to drop by 22% in 2020. 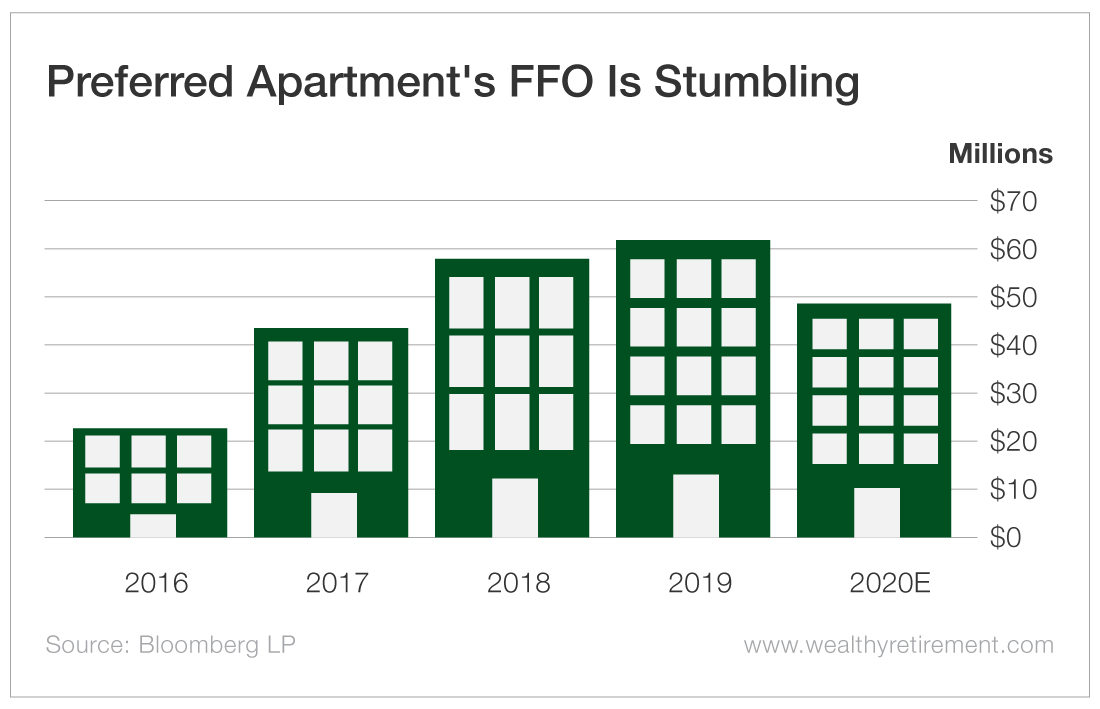 Last year, Preferred Apartment Communities generated $61.8 million in FFO while paying out $45.4 million in dividends for a payout ratio of 74%.

However, this year, FFO is forecast to drop to $48.5 million. If the company paid out the same amount in dividends that it did last year, the payout ratio would spike to 94%.

That doesn’t leave a lot of room for error if FFO comes in lower than expected.

So the company made the difficult but probably wise decision to lower the dividend. It is now expected to pay shareholders $37.5 million, which comes out to 77% of FFO.

The new lower dividend seems sustainable. The wild card is whether FFO comes in at expectations. If not, management may have to lower the dividend payout again.

And we know that once a management team breaks that sacred seal of cutting the dividend, it is more likely to do it again. So that lowers SafetyNet Pro’s dividend safety rating a notch.

Preferred Apartment Communities’ dividend safety really comes down to where 2020’s FFO total comes in and what is expected next year.

And be sure to check to see if I’ve written about your favorite stock lately. Just type the name of the company in the search box on the upper right part of the Wealthy Retirement homepage.

A 7% Yield About to Be Upgraded