On Thursday, the S&P 500 reached a historic high of 2,956.20 as investors rode the Fed’s hints of interest rate cuts to come in July.

The infamous Volatility Index, or VIX, is reading neutral, and more companies are hitting 52-week highs than are suffering yearly lows. Investors are bullish despite compelling warnings from top executives about the dangers of increased tariffs on China.

However, despite this show of optimism, CNN’s “Fear & Greed Index” puts current market sentiment at a neutral 45, sitting midway between “Extreme Fear” and “Extreme Greed.” Furthermore, while the stars may seem to be aligning, and while our major indexes are trending upward… 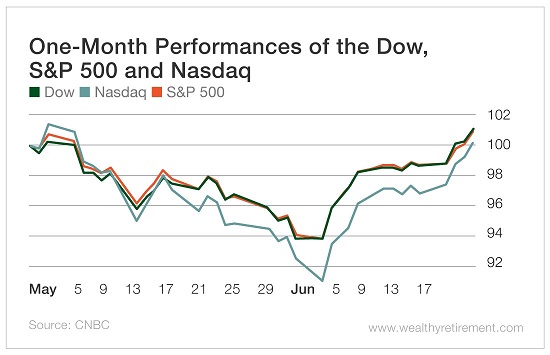 One thing is apparent: Sentiment and behavior can be different things entirely.

We call the contradiction between investors’ bullish outlook and bearish conduct the “Sentiment-Behavior Paradox” – and nowhere is it more apparent than in the bond market.

While investor sentiment today may point to a healthy balance of fear and greed, actions speak louder than words. According to the Bank of America Merrill Lynch Fund Manager Survey, as of Tuesday, U.S. government bonds (a notoriously defensive investment) were the most crowded asset class.

It makes sense. This 10-year bull market saw a large pullback in December and another in May, so it’s no surprise that investors may be preparing for a top by shifting into safer investments.

This general increase in bond-buying is accompanied by a marked change in investors’ asset allocation. Since last year, there’s been an increase in the percentage of bond funds allocated in investors’ portfolios. 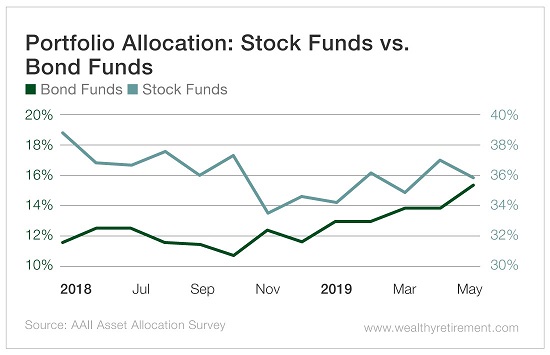 The Fear & Greed Index may be flashing neutral, but investors are moving their money into bonds – a traditionally bearish sign.

Despite the increase in bullish sentiment that investors reported in the American Association of Individual Investors’ last three sentiment surveys over the past month, we don’t expect this bond-buying trend to stop.

With rumors of impending rate cuts, investors in search of security will want to get in beforehand. Squeezing into the bond market early will pay off post-cut as government bond yields drop and prices soar.

This was even foreshadowed on Thursday as we saw bond yields tank without a formal cut. The Fed’s decision to keep rates steady (albeit with hints of a cut coming soon) still sent the 10-year Treasury yield to a new five-year low.

Despite the drop in yields, investors may do best to hold on to their hats – and their bonds.

In late 2000 and 2007, parallel rate cut anticipation also led to brief market breakthroughs – which were then chased by pullbacks in the S&P. Therefore, once the Fed starts cutting rates, a correction could follow.

Decades of consistent market behavior prove that any correction or recession will lead to a stronger recovery. In the meantime, though, the government bonds that U.S. investors have been stocking up on will provide consistent, reliable income – even at 2%.

(Your advantages don’t end with price – corporate bonds are tied to a company’s fundamentals and are less susceptible to the whims of the Fed. Even BB rated corporate “junk bonds” have a default rate of only 0.18%, so it’s worth reassessing whether you really need Uncle Sam’s guarantee to rest easy.)

Our traditional indicators of market sentiment tell us there’s “nothing to see here” – just a baseline, healthy balance of optimism and skepticism, and a resurgence in the S&P in response to good news. Our recent buying habits, however, tell a different story.

The Foolproof Way to Beat the Market

The Foolproof Way to Beat the Market

I Was Wrong… and I Paid for It