There’s no question about it…

The oncoming transition to electric vehicles (EVs) is a massive investment opportunity – a “megatrend,” if you will.

Governments across the planet have announced plans to rapidly phase out the internal combustion engine.

In the meantime, there are currently more than 1 billion automobiles on the road worldwide – and the International Energy Agency estimates that at this point, fewer than 10 million of them are electric.

EVs, which will eventually dominate this market, currently have a rounding error of a market share.

The EV market share is on the cusp of explosive growth. Hundreds of millions of electric cars are going to hit the road in the coming years.

I’ve been telling you for months that Tesla (Nasdaq: TSLA) is not the way to profit from this transition.

That’s because Tesla’s $550 billion stock market valuation is absurdly high for a company that still hasn’t turned a profit manufacturing its electric cars.

Tesla’s earnings are all smoke and mirrors.

The only reason that Tesla has been able to post any profit to date is it has been selling regulatory emissions credits to other automakers.

Despite Tesla’s lack of profits, in December, its stock market valuation exceeded the combined market value of the next nine largest (and very profitable) car companies in the world.

With a $550 billion valuation, Tesla is priced as though it will be exponentially more profitable than any automaker in history.

I’d even say that Tesla is valued as though it is already as profitable as the entire current auto industry.

That is wild considering at this point we don’t even know that Tesla is ever going to make any money.

In fact, Dr. Michael Burry, who was portrayed by Academy Award winner Christian Bale in the movie The Big Short, just revealed that he has made a massive bet that Tesla’s share price will plummet.

The Big Short portrayed how Burry scored windfall profits by making a prescient bet on the U.S. housing bust in 2007 and 2008.

Burry’s most recent quarterly filing with the U.S. Securities and Exchange Commission shows that he owns put options on 800,100 Tesla shares.

With Tesla’s insane valuation, I think he might be onto something again…

Interestingly, Einhorn is also a nonbeliever in Tesla.

His thesis is pretty simple…

The transition to EVs is incredibly bullish for copper, and Teck Resources is cheap.

Demand for copper and demand for EVs are tied at the hip.

It takes four times as much copper to manufacture an EV as it takes to make a traditional combustion engine automobile.

With hundreds of millions of EVs rolling off assembly lines over the next decade, we are going to see massive new demand for copper.

The transition of our power generation to renewable sources like solar and wind, which use five times as much copper as fossil fuel alternatives, will also be bullish for copper.

While copper demand is set to explode, Einhorn believes that the pipeline of new copper production projects is going to fall far short of being able to provide sufficient supply.

Economics 101 tells us that is bullish for prices…

The copper market has sniffed this out with copper prices now near all-time highs, having more than doubled in the past year. 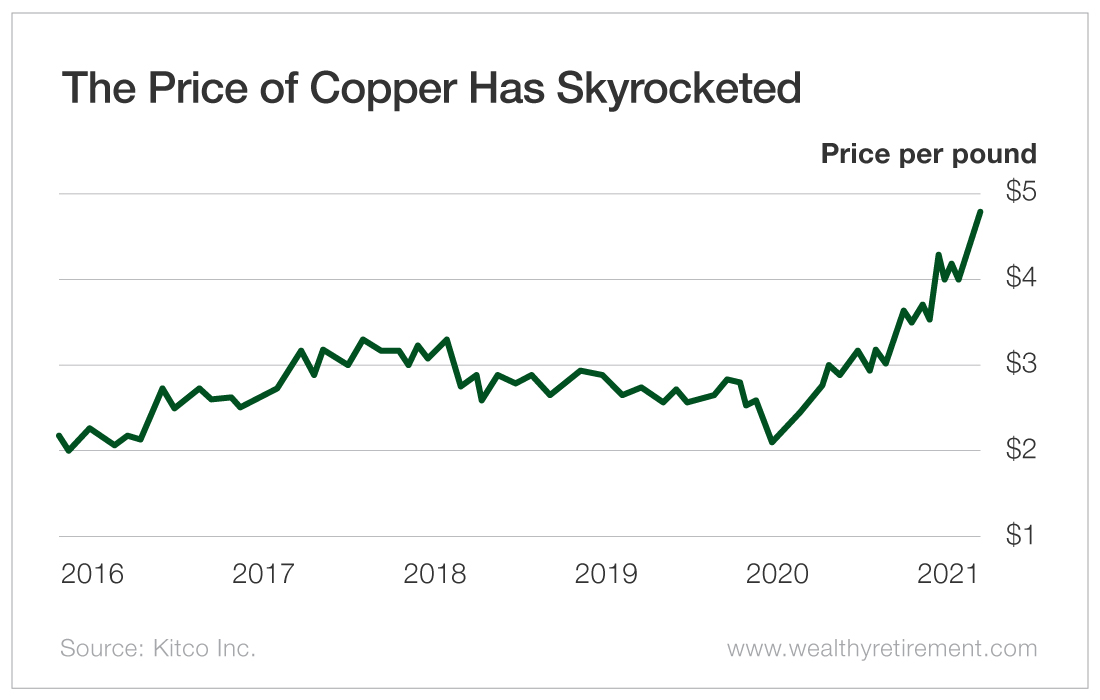 In Teck Resources, Einhorn owns a copper producer that is priced at two-thirds the valuation of competitors despite having much better growth prospects.

Faster-growing companies should trade at a premium, not a discount…

At current copper prices, Einhorn believes that Teck shares should be trading at $60. That is more than double Teck’s current trading price.

If copper continues going higher in the coming years, that will mean further upside to Einhorn’s price target for Teck.