The “sustainable” investing movement is in full swing, folks.

It’s a trend defined by the evaluation of environmental, social and governance (ESG) factors when investing.

In other words, it promotes investing with a conscience.

The intent of the movement is to direct capital toward only businesses that are doing good things for the world.

It sounds like a great idea to me, and it’s here to stay.

As you can well imagine, oil producers are not considered very ESG-friendly.

They produce the hydrocarbons that are a major contributor to global warming.

With ESG principles now a priority for many institutional investors, many of those institutions are no longer willing to buy shares of oil sands producers.

And many of the huge institutions that do own oil sands producers are now selling.

Even Canada’s own second-largest pension fund plans to follow suit.

Everyone is selling shares of Canadian oil sands producers these days, and almost nobody is buying.

As you would expect, as often happens when there’s a relentless wave of selling and an absence of buying…

The tobacco industry has been in the bad books for years.

Big Tobacco companies have long knowingly sold poisonous products, and they have faced demand growth challenges and been excluded from many portfolios.

Yet in the chart below, you can see that anyone who owned Big Tobacco company and cash cow Altria Group (NYSE: MO) during the turn of the century saw huge outperformance in total return (share price appreciation plus reinvested dividends). 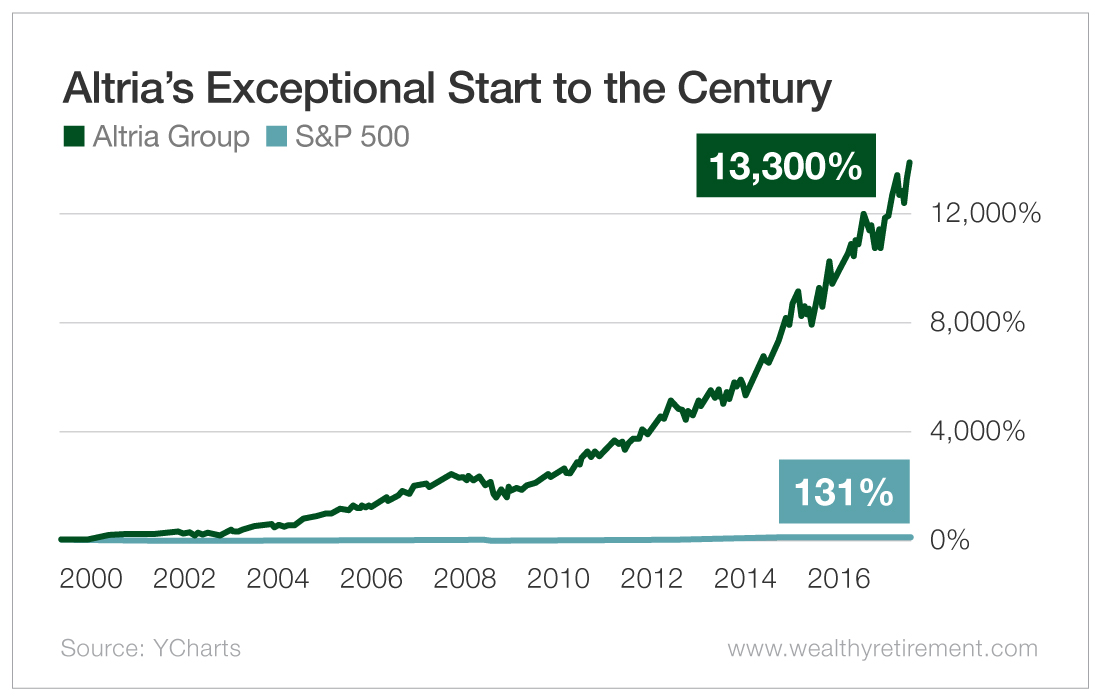 That seemingly flat line at the bottom of this chart is the total return from owning the S&P 500.

You can’t even see it relative to Altria’s total return.

That’s an astounding return from a despised company.

I see many similarities between Altria at the turn of the century and oil sands producers today.

That’s why I think the return from owning oil sands producers over the next 10 years could be very rewarding.

First, the valuations for these stocks are astoundingly cheap.

That means if the company wanted to, it could pay a 27% dividend to shareholders right now.

Instead, the company is wisely using that free cash flow to retire debt.

At current oil prices, Cenovus could repay all of its long-term debt by the end of 2023, at which point all of that cash flow can go to shareholders.

What the company actually plans to do is use all free cash flow to reduce debt through the end of this year, after which I expect an announcement of a significant dividend increase and a share repurchase plan.

Both of those developments will be catalysts for the share price.

Their oil is mined in a predictable, repeatable manner that allows them to spend less on capital expenditures and produce more free cash flow…

Again, that’s cash flow that can be used to pay dividends and repurchase shares.

Third, with the ESG movement limiting the entire oil industry’s access to capital and ability to drill, oil supply is likely going to be crimped going forward.

That will support oil prices and allow oil sands producers, like Cenovus, to keep cranking out gobs of free cash flow.

Like it or not, we still need oil to run our economy and feed nearly 8 billion hungry mouths for a few decades to come.

With institutional money exiting these oil sands producers and little new money flowing in, it could take a while for their share prices to properly reflect the cash these businesses are generating.

Interestingly, that would be a boon for shareholders.

That is because oil sands producers like Cenovus will be vacuuming up their own shares at dirt-cheap valuations at an incredible rate through repurchase plans.

At the current valuation, Cenovus could repurchase 27% of its shares in just one year!

Eventually, the market will wake up and start valuing these businesses based on the deluges of cash flow they generate.

And then these oil sands producers may end up with a stock chart that looks like Altria’s from the start of this century.

Your Bear Market Survival Guide for 2022