In just a couple of months, the COVID-19 outbreak has created a decade’s worth of growth in U.S. online shopping.

To be clear, it wasn’t as though the market share for online shopping hadn’t already been growing prior to the pandemic… 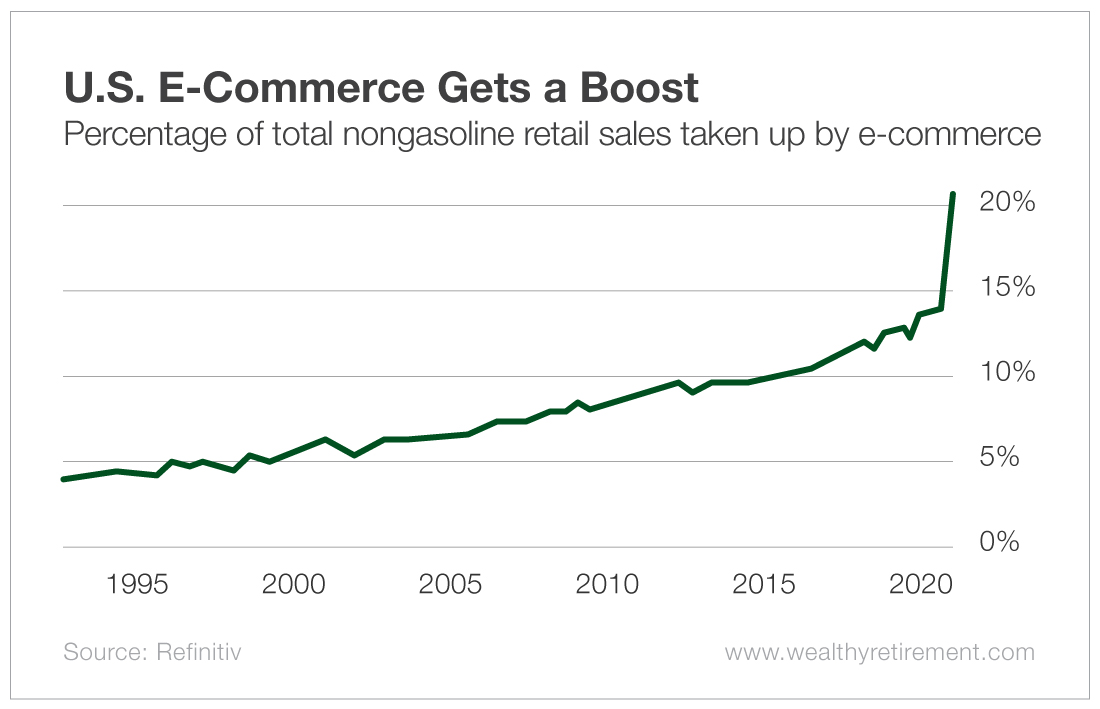 In 2019, consumers spent $602 billion online with American merchants. According to the U.S. Department of Commerce, that was a 15% increase from the $523 billion spent online in 2018.

That shows a strong, accelerating tailwind for e-commerce.

Since the turn of the century, online shopping has steadily taken more and more of the market. Between 2000 and 2020, the percentage of retail transactions done online has doubled.

(If you were wondering – like I was – Amazon alone accounted for more than one-third of all online shopping done in the United States last year.)

Online Is Gaining Market Share, and We Know Who Is Losing

Brick-and-mortar retailers were standing at the edge of a cliff prior to the arrival of COVID-19.

The fallout from the pandemic has swept many of them over the edge.

Two months in, bankruptcy filings from retailers seem to be hitting the news on a daily basis.

Many of the companies filing for bankruptcy are very familiar…

This isn’t the full list… These are just some of the most recognizable names.

And this is just the start. There are months and months of economic weakness coming that the already weakened retail industry will have to suffer through.

Another sign of how troubled brick-and-mortar stores are came from home goods retailer Pier 1 Imports, which originally filed for Chapter 11 bankruptcy in February.

On May 19, Pier 1 announced that it couldn’t even find anyone interested in buying the company’s assets out of bankruptcy at a discounted price. All 900 of its stores will be erased from existence.

I remember as a child in the early 1980s walking into a department store thinking how cool it would be if there were a motion detector that automatically opened the doors for me.

I had gotten that idea from the futuristic cartoon The Jetsons and never thought that the automated door would soon be the norm everywhere.

This memory helps me appreciate how hard it is to predict the future – and how dangerous it is as investors to bet against or ignore change.

Can you imagine? Renting a VCR!

We weren’t poor – this was normal. Since then, the VCR has come and gone, and so has the DVD. And cable and network television are now at risk because of streaming video services.

My point is that the fate that these brick-and-mortar retailers are meeting because of COVID-19 was always the eventual outcome.

Some of the market share that online sales have taken in the past two months will be given back, but only temporarily.

As investors, we don’t have to make major bets on change, but we certainly must not make bets against it.