written by Marc Lichtenfeld Wednesday, May 19, 2021

Lumen Technologies (NYSE: LUMN) is somewhat of a rarity in the markets. It’s a technology company with a very strong yield. Its 7% yield is more in line with those of master limited partnerships or beaten-up real estate investment trusts.

But that’s because it’s the old debt-laden CenturyLink, a large internet provider. The company rebranded as Lumen Technologies in 2020.

The good news is that this year, free cash flow is forecast to be a little higher. It still won’t be anywhere close to 2018’s level, but if it stops falling, that’s a good thing. 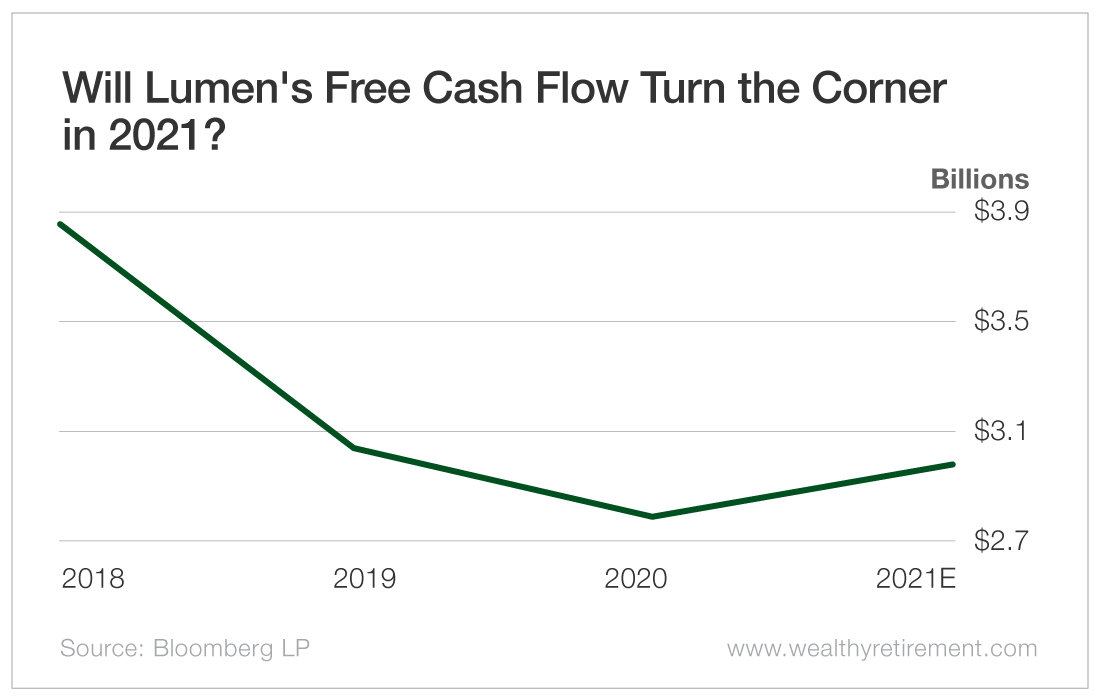 Another good thing for Lumen is that it can easily afford its dividend.

Even last year, when free cash flow was at its lowest point in three years at $2.8 billion, Lumen paid out only $1.1 billion in dividends for a low payout ratio of 40%.

This year, Lumen is projected to pay out the same amount in dividends, but with the slightly higher expected free cash flow, the payout ratio dips to 37%.

Here’s what’s not so good… The dividend was cut twice in the past 10 years, including a drastic reduction in 2019 to $0.25 per share quarterly from $0.54. And this was after management had assured investors the prior year that the dividend was safe.

Management said the cash saved by the lower dividend would be used to pay down debt.

Lumen still has a lot of debt, though it’s down a bit from when Lumen cut its dividend in 2019. Today, it has $31.5 billion in debt, including $3.8 billion that comes due this year, with just $486 million in cash as of the end of the first quarter.

So while the company can easily afford the dividend, management has burned investors twice before. As then-President George W. Bush famously said, “Fool me once, shame on you. Fool me, you can’t get fooled again.”

SafetyNet Pro won’t get fooled by Lumen (the old CenturyLink).

Despite the low payout ratio, two dividend cuts, a recent decline in free cash flow and a big debt load mean the dividend is not safe.

A Stag Party Everyone Can Enjoy