Editor’s Note: In May 2019, trading experts Bryan Bottarelli and Karim Rahemtulla launched the biggest breakthrough in investment research the world has ever seen. They created a community of like-minded individuals and trading enthusiasts focused on one thing: winning.

They call this community The War Room.

Read on below for a recent profile from Bryan on a unique stock that’s poised to stay in style – as well as a behind-the-scenes look at one of The War Room’s recent wins.

Today I’m sharing with you one of the biggest winners we’ve had to date in The War Room. As you’ll see, it’s a mind-blowing winner – a true monster.

You see, up until now, I’ve never recommended a stock that trades on a foreign exchange. But something happened recently that changed this trend.

My family did something that we haven’t done in months… We went to the mall.

And I have to tell you, it was jam-packed so much that it almost felt normal again. 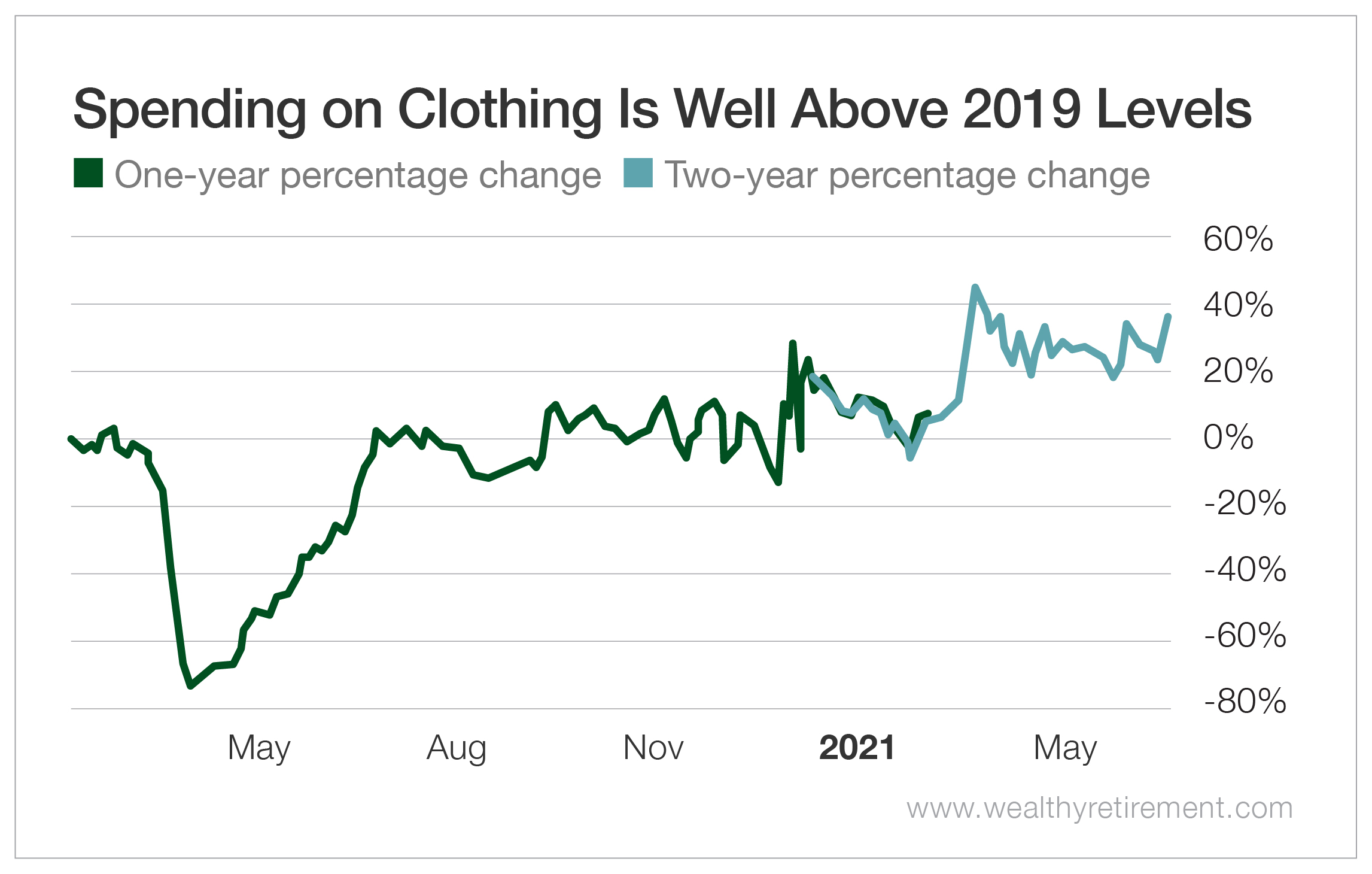 You see, people still want to be fashionable – but since trends change so quickly, gone are the days that shoppers spend money on expensive fashion items. Instead, they’re now searching for low-cost fashion collections that are frequently updated.

The reason I know this is there was one store in the mall that blew me away. It had something that no other store had – a line that was a quarter-mile long just to get into the store.

No exaggeration, it probably took more than 30 minutes of waiting in line to just get in – and the line was in front of a store called Zara.

I admit, I had never been in a Zara store before – so while my wife and kids waited in line, I did some research.

When you type in the symbol ITX in Yahoo Finance, for example, it’ll display as “Industria de Diseño Textil SA (ITX.MC).”

It operates 7,469 stores in 96 markets and online stores in 202 markets – including under names such as Zara, Pull&Bear, Massimo Dutti, Bershka, Stradivarius, Oysho, Zara Home and Uterqüe.

Founded in 1963 and based in Coruña, Spain, Inditex saw its profits plunge 70% over the past year. But now I think that’s about to change in a big way. The stock currently trades at 27X this year’s expected earnings, which is in line with its peers.

But now that the coronavirus has changed shopping habits – and consumers want fashionable clothes at Gap-like prices – I believe that Zara is about to become a leader in the new wave of shopping trends.

Anne Critchlow, an analyst at Société Générale, recently said that Inditex looks set to exit the pandemic with a “lower rent bill” after closing some stores and, going forward, it’s positioned to benefit from rapid online sales – and I agree.

Anytime you’re at a packed mall and one store has a mile-long line, you have to take notice. The same thing happened more than a decade ago when I saw Lululemon (Nasdaq: LULU) for the first time, and you know how well that stock has performed over the last 10 years.

Based on this, I think it’s wise to add some long exposure to Industria de Diseño Textil SA, the first Spanish stock I’ve ever tracked, to your portfolio.

And now… as I teased at the opening of this article… here are the details on the MONSTER WINNER I recently took on Biogen (Nasdaq: BIIB).

As I’m sure you’ve heard, the Food and Drug Administration (FDA) approved Biogen’s Alzheimer’s drug aducanumab, making it the first new medicine for the disease in nearly two decades. The drug is expected to generate billions of dollars in revenue for Biogen because more than 6 million Americans are living with Alzheimer’s disease.

By 2050, that number is projected to rise to nearly 13 million. Since there were no drugs cleared by the FDA that can slow the mental decline from Alzheimer’s, which is the sixth-leading cause of death in the United States, this is HUGE news for Biogen.

As a result, shares of Biogen are blasting off and War Room members were positioned to clean house! 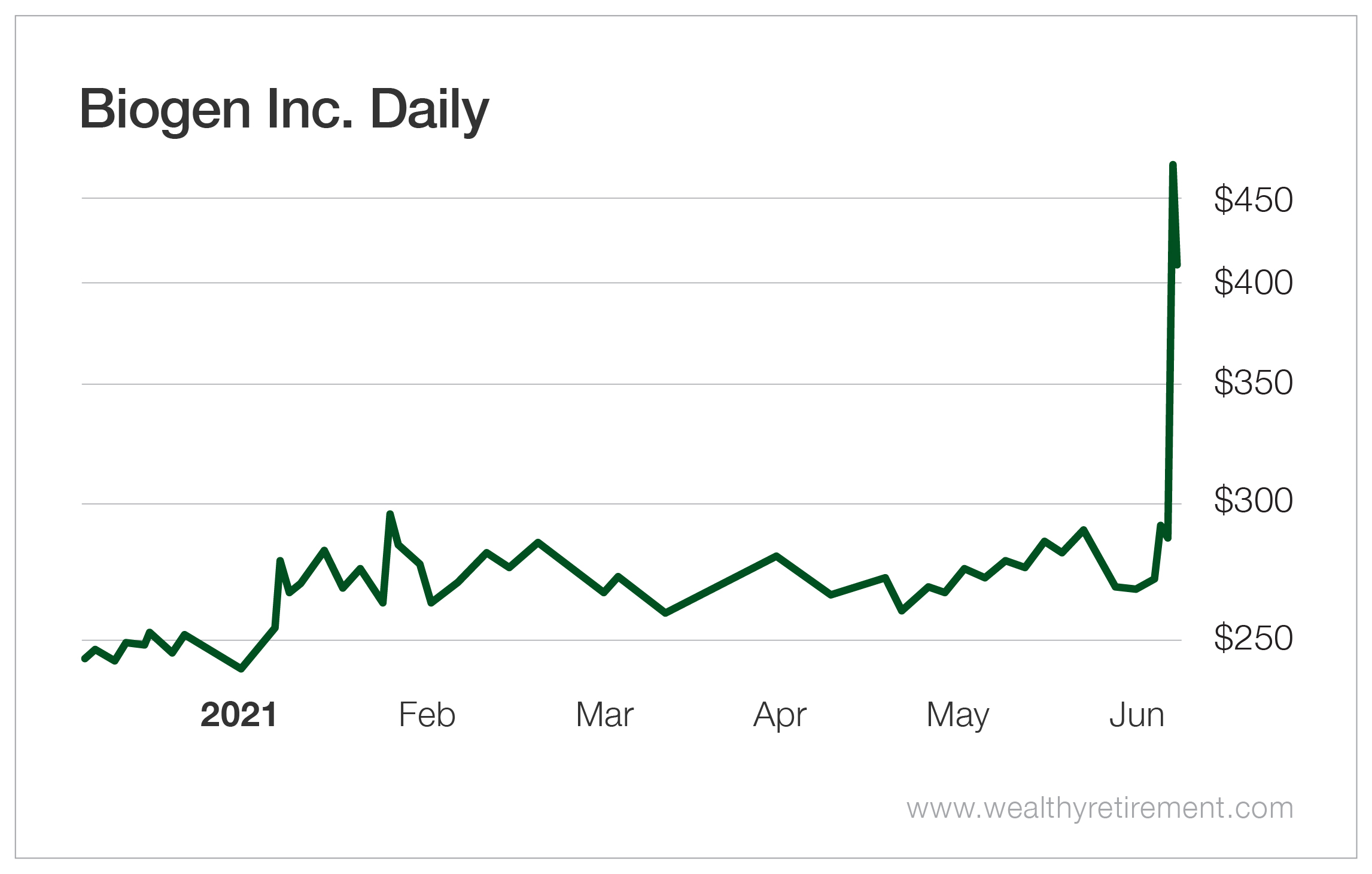 Look at that chart – 175% in four months! And then look at these profits from readers!

Graduating with a business degree from the highly rated Indiana University Kelley School of Business, Bryan got his first job out of college trading stock options on the floor of the Chicago Board Options Exchange (CBOE). There he was mentored by one of the country’s top floor traders in the heart of the technology boom from 1999 to 2000 – trading in the crowded and lively Apple computer pit. Executing his trades in real time, Bryan learned to identify and implement some of his most powerful trading secrets… secrets that rarely make their way outside the CBOE to individual traders.

Recognizing the true value of these methods, Bryan tapped into his entrepreneurial spirit to take a risk. He walked off the CBOE floor and launched his own independent trading research service called Bottarelli Research. From February 2006 to December 2018, Bryan gave his precise trading instructions to a small, elite group – most of which joined him on day one and have been followers ever since.

As a so-called “play tactician,” Bryan uses his hands-on knowledge of floor trading to shape opportunities and chart formations into elegant, powerful and profitable recommendations. And by using the same hedging techniques taught by professional floor traders, Bryan is able to deliver his readers remarkable gain opportunities while strictly limiting their total risk.

Along the way, Bryan has developed a cumulative track record that could impress even the most successful hedge fund manager.

He now spends his days moderating one of the most elite trading research forums ever created, The War Room.