How Will Commodity Prices Affect This 12% Yielder?

Most energy MLPs are pipeline companies that are not directly impacted by commodity prices. They charge contracted fees for transporting other companies’ oil and gas.

NGL Energy Partners transports crude, but it has exposure to commodity prices due to its refinery business.

As a result, its free cash flow can vary wildly.

As you can see here, cash available for distribution (CAD), a measure of cash flow for MLPs, tanked when oil prices fell in 2016. NGL Energy’s cash flow’s rise and fall was about a year behind the fluctuation in oil prices. 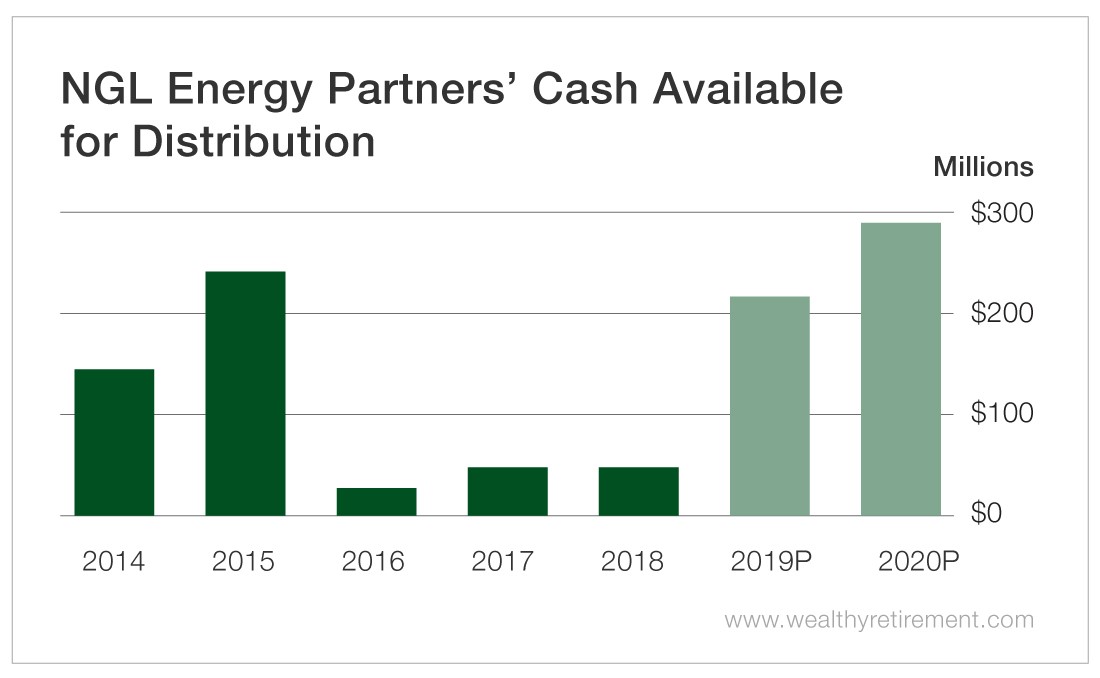 Going forward, CAD is forecast to surge in 2019 and 2020. That should cover the $193 million in distributions that NGL Energy is projected to pay investors this year. (Note: An MLP calls its dividend a distribution.)

Despite the growth in CAD, don’t expect NGL Energy to raise the distribution. On the MLP’s most recent earnings call, CEO Michael Krimbill stated, “Distribution increases will not happen with a double-digit yield.” The quarterly distribution is $0.39, which equals an 11.7% yield.

The company’s distribution history is mixed. It started off strong, raising the payout 16 quarters in a row beginning in 2012. Then it promptly slashed the distribution 39% in 2016 when CAD plummeted. It has remained the same since July 2016.

The company also has a lot of debt. Though its debt level has come down recently, it’s still high enough that SafetyNet Pro penalizes the company.

The high debt load, combined with a recent distribution cut, indicates that there is some risk of another reduction in the distribution. I wouldn’t expect a lower distribution in the near future, but if oil prices fall again and CAD is affected, the risk could be even higher.

I’m not too worried about NGL Energy Partners’ distribution right now, but keep an eye on oil prices and the company’s CAD. If you see either start to sink, it may be time to get concerned.

P.S. Keeping an eye on oil prices is a safe way to stay up to date on your energy investments’ outlooks – but everyday fluctuations aren’t the only changes that are hitting energy stocks today.

For insight into how changes in the commodities sector – what some call an “energy revolution” – will affect the U.S. market, check out my colleague David Fessler’s new best-seller, The Energy Disruption Triangle: Three Sectors That Will Change How We Generate, Use, and Store Energy.