It’s an old Wall Street saying meaning that when the market is going up, investors and journalists will focus on what is positive.

And when the market is going down, people emphasize what is negative…

We saw this play out in dramatic fashion last month. The first half of January featured a sharp rally and a focus on all the “good news” – big gains in 2019, followed by the U.S.-China Phase One trade deal, fueled some market exuberance.

My point is that the market was reaching some extreme levels before it started turning south at the end of January. It didn’t need a “reason,” but, again, price dictates news.

The novel coronavirus has provided a good excuse for selling and a good explanation for a decline that, arguably, was overdue before the outbreak.

As of February 2, there have been 300 deaths and nearly 15,000 confirmed cases of coronavirus in China. The U.S. has seven confirmed cases and 25 other locales have confirmed at least one, according to the Centers for Disease Control and Prevention.

Apple (Nasdaq: AAPL) announced it will temporarily close all its stores in China.

Why Health Officials – and Businesses – Prefer to Overreact

The U.S. Department of State issued a travel ban to China, and Secretary of Health and Human Services Alex Azar declared a public health emergency on January 31.

Effective February 2, U.S. citizens arriving from China may be subject to up to a 14-day federal quarantine. Foreign nationals who traveled to China in the previous 14 days will be denied entry into the U.S.

“We are preparing as if this were the next pandemic,” said Dr. Nancy Messonnier, director of the National Center for Immunization and Respiratory Diseases.

“If we take strong measures now, we may be able to blunt the impact of the virus on the United States… We would rather be remembered for overreacting than underreacting.”

Investors appear to be doing the same, even if history suggests the economic impact of coronavirus will prove short-lived.

As the statistics above reveal, the market has long been due for a setback. A 5% to 10% pullback would be normal and healthy after the monstrous run in 2019 and early January 2020.

The S&P has fallen about 3% from its peak so far, suggesting there’s more risk in the short-term even if the market’s long-term outlook remains bright.

The overall market may be down, but there were certainly some standout performers last week.

Stocks that show strength during periods of overall market weakness are highly valued by investors. For this reason, many technicians use the relative strength index (RSI) as a key factor in determining whether to buy or sell a security.

On the other hand, some stocks are weaker than average during periods of market strength and fall further than the overall market during declines. You want to avoid stocks with “relative weakness,” or low RSI ratings.

Unfortunately, this is the case for energy stocks…

While the stock market grabbed the headlines, the oil market has really been decimated by fears that global growth will slow because of coronavirus.

Crude prices fell 15% in January and hit their lowest level since early October. Chart patterns suggest crude is likely to retest its 2016 low of $35 in this cycle.

And the weakness is not limited to the oil majors. While the S&P 500 fell about 1% in January, various energy exchange-traded funds fell between 12% and 19%. 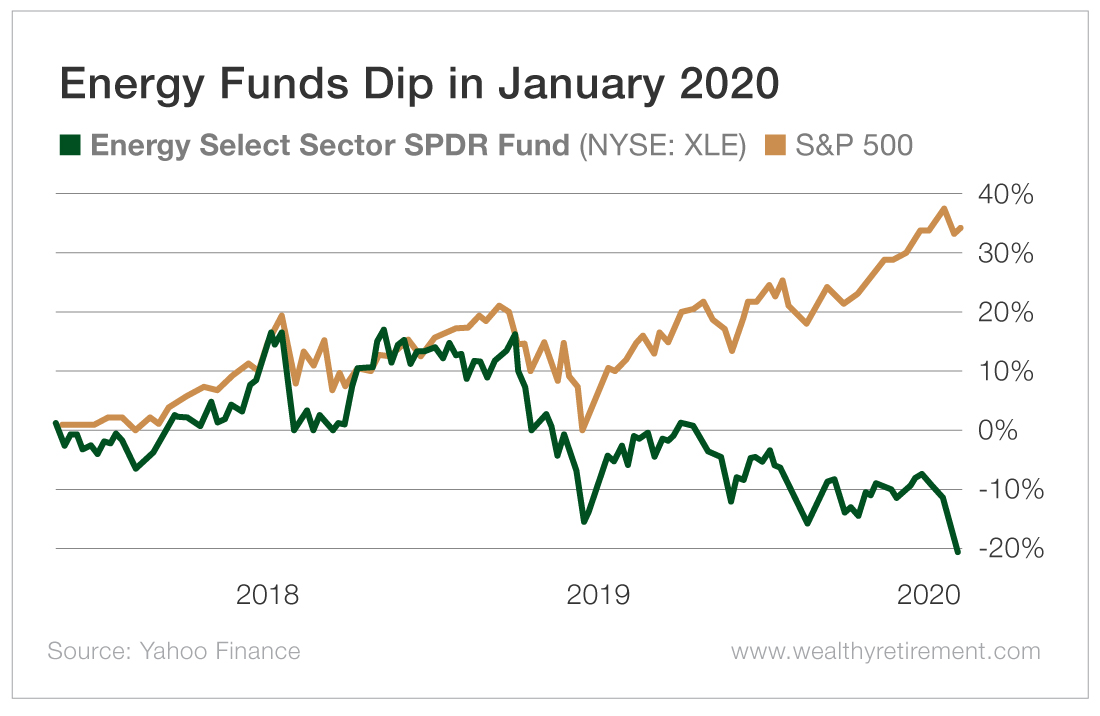 In early January, I wrote that energy stocks looked poised for a comeback in 2020 after years of underperformance. That forecast was early.

Investors who bet on finding value in energy stocks are now sitting on big losses. That is going to be another downside for the sector for the foreseeable future.

The start of the year suggests there’s more pain to come, so investors are better off getting out of energy names.

Look to reenter positions at lower prices, which are almost certainly coming. Fortune favors the bold, but remember: Discretion is the better part of valor.

How to Respond to the Fed’s Coming Rate...