Home Dividend InvestingSafety Net A 12.5% Yield Going the Way of the Dinosaur

Despite President Trump’s efforts to revive the coal industry, it is dying.

The production and use of coal are at 40-year lows even though the economy is twice the size that it was four decades ago. And more coal plants have shut down in the past two years than in the preceding eight.

It pays a 12.5% dividend yield, which can help appease investors as the business deteriorates. But can those investors count on getting paid the $0.54-per-share quarterly distribution?

Cash available for distribution (CAD), a measure of cash flow for master limited partnerships (MLPs), has been declining over the past few years. 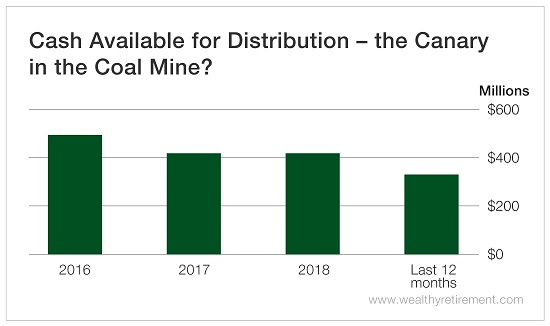 While earnings are projected to grow in 2019, next year Wall Street expects a 34% decline, after which Alliance Resource Partners’ revenue will slide to its lowest level since 2015. That doesn’t bode well for cash flow.

As of now, the company can still cover the distribution – but if CAD follows earnings next year, it’s going to be pretty dicey.

SafetyNet Pro is a quantitative model.

It doesn’t know the coal industry is dying. Even without that knowledge, the dividend safety rating for Alliance Resource Partners is low because of declining cash flow and a history of recent distribution cuts.

When you look at the state of the industry it’s in, the low dividend safety rating makes even more sense.

Why It Pays to Be a Market Coward

A Stock With a Double-Digit Yield and Improving...