A Downgrade in Dividend Safety for a 12% Yielder

written by Marc Lichtenfeld Wednesday, May 8, 2019

Last June, I covered New Residential Investment Corp. (NYSE: NRZ). At the time, the stock received a “B” for dividend safety.

In the article, I mentioned that when I looked at the stock the previous year, the only issue was an expected decrease in net interest income (NII).

New Residential Investment Corp. is a mortgage real estate investment trust (REIT), and NII is the measure of cash flow that we use for mortgage REITs. It’s essentially the money that is made by lending out cash minus the interest that it is charged for borrowing the cash.

In that 2018 article, I cautioned that NII was forecast to decline to $856 million – a bigger tumble than previously expected. 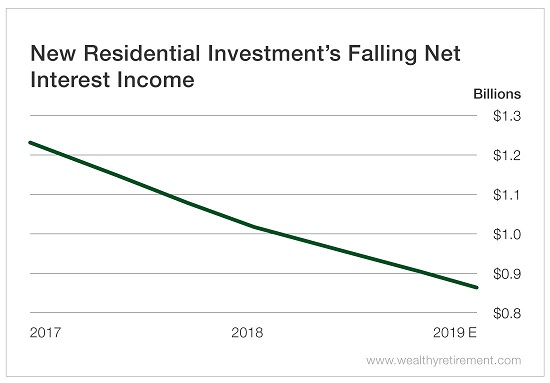 That’s starting to get a bit close to how much New Residential Investment Corp. will likely pay out in dividends this year. Wealthy Retirement estimates the company will pay shareholders $835 million in dividends in 2019.

That’s a 96% payout ratio. In other words, the company will pay out $0.96 in dividends for every $1 of NII. That doesn’t give New Residential Investment Corp. a lot of breathing room. Should NII fall more than expected, the company could have a problem paying the current dividend.

New Residential Investment Corp. currently pays a $0.50 per share quarterly dividend, which comes out to a plump 12% annual yield.

The numbers weren’t as bad as expected last year, but it’s tough to bank on that happening again. Yields have been low, and the yield curve, which is the difference between short- and long-term rates, has been low.

Mortgage REITs borrow money short term and lend it long term. When there is a narrow spread between the two sets of rates, the curve is considered “flat” and it is harder for mortgage REITs to make money. The wider the spread, the more NII mortgage REITs should make.

If New Residential Investment Corp. doesn’t get NII moving higher shortly, the dividend will have to be considered at-risk.

Is Dividend Investing Worth It?

Is a Cut on the Horizon for This...