AGNC Investment Corp. (Nasdaq: AGNC) is one of the most requested stocks here in the Safety Net column.

That yield currently sits at 9% – so investors want to know whether they can rely on that $0.12 per share monthly dividend.

The answer is no. But with a caveat.

In 2018, I called AGNC’s dividend safety the worst I’d ever seen due to declining net interest income and a payout ratio that was too high. I said a dividend cut was imminent – and the company acted as predicted, lowering the dividend from $0.18 to $0.16.

I followed up a year later, saying AGNC’s dividend safety was no longer the worst I’d ever seen but also that I still expected another dividend cut in the following 12 months. The decrease came seven months later, when the payout was reduced to $0.12 from $0.16.

Last year, the company’s fundamentals had improved. So while it still received an “F” from SafetyNet Pro because management had yelled “cut” more than Martin Scorsese, a dividend reduction didn’t appear as likely in the immediate future.

Let’s take another look at AGNC to determine whether investors can breathe a little easier and expect to hang on to their $0.12 per share dividend.

When we analyze mortgage REITs, we look at net interest income. It is the difference between what the company receives for lending money and what it pays for borrowing capital, minus expenses.

In 2021, AGNC’s net interest income is expected to nearly double from last year. 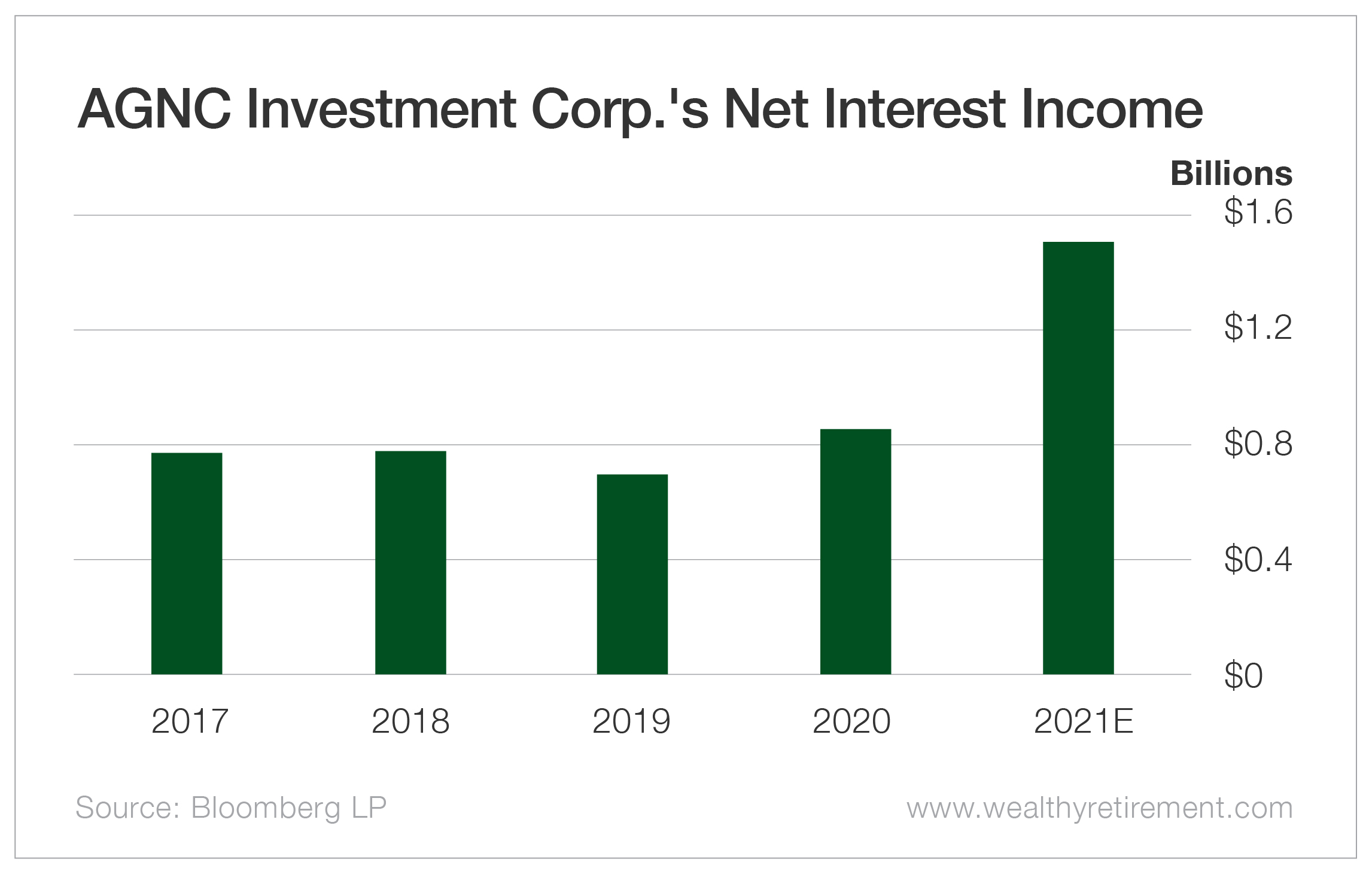 Importantly, with net interest income expected to surge, AGNC will actually be able to afford its dividend.

This year, however, net interest income is forecast to be $1.5 billion while dividends paid is projected to be just half that figure at $756 million. That means AGNC can actually afford the dividend it is paying shareholders.

But AGNC is like that spouse who promises to change for the better. You want to believe them, but you know in your heart it’s going to be more of the same…

Right now, AGNC is bringing you flowers, cleaning up nice and being good to your mother. But it has cut the dividend eight times in the past decade. In fact, in the past 10 years, only 2018 didn’t see a lowered dividend. 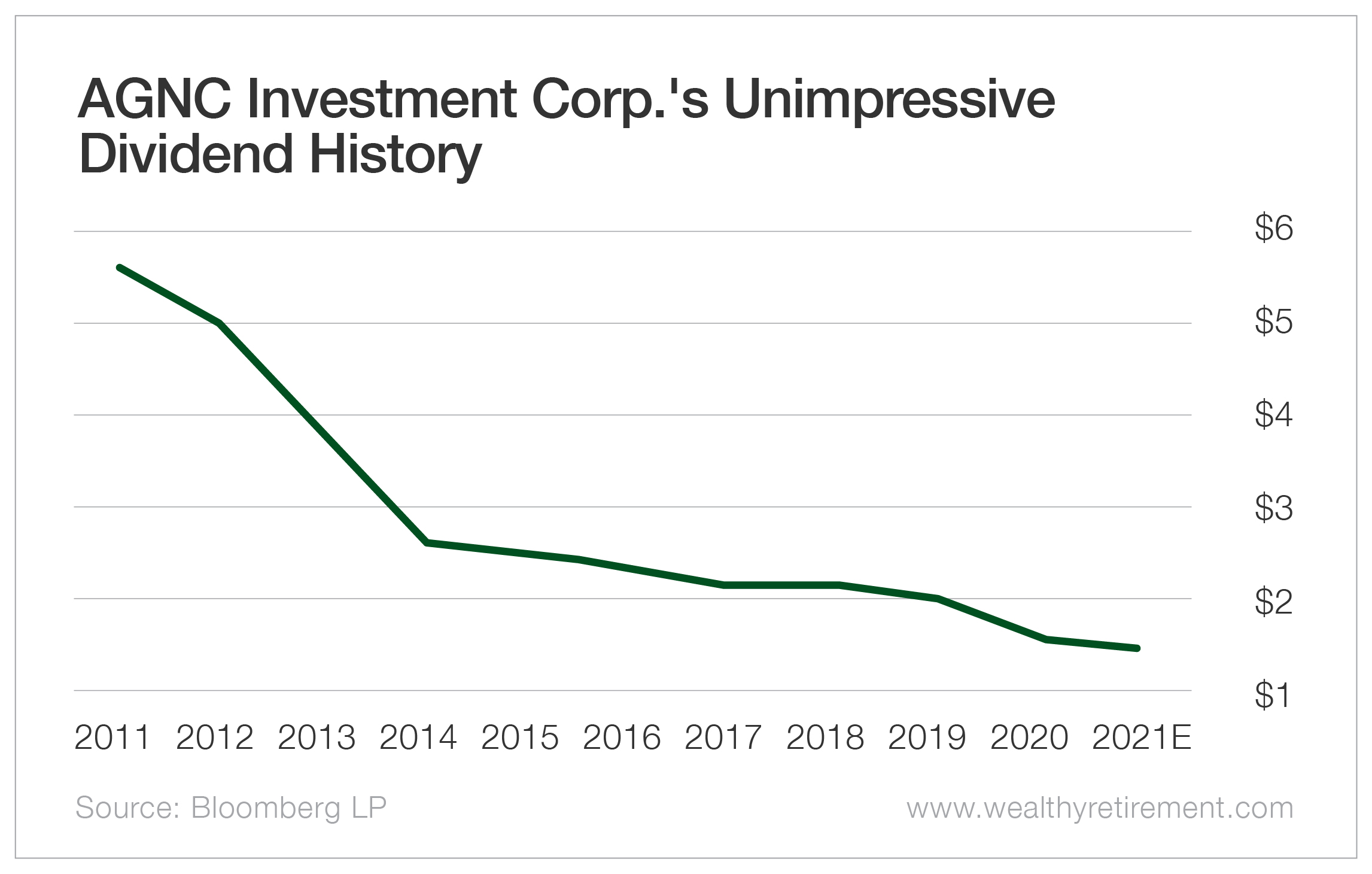 It’s likely only a matter of time before it goes back to its bad behavior.

AGNC can afford its dividend right now. But I don’t believe it can change. The next time net interest income declines, you can bet on the dividend doing the same.

If you have a stock whose dividend safety you’d like me to analyze, leave the ticker symbol in the comments section. You can also search Wealthy Retirement by clicking the magnifying glass on the upper right corner of our website and entering the company’s name.

P.S. You can follow me on Twitter for my thoughts on investing and the markets throughout the day. I’m @stocksnboxing.

An Innovative Entertainment Company for $0.50 on the Dollar

Will This 6.34% Yielder Keep Shareholders Entertained?