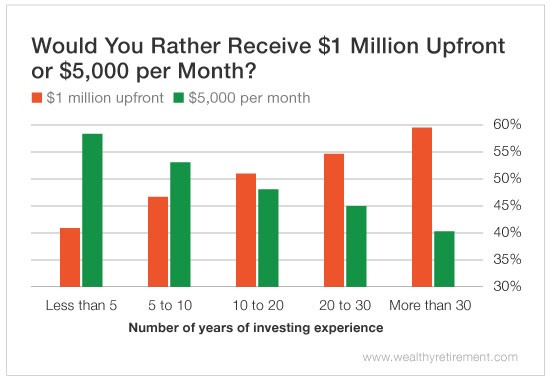 “Would you rather” is an age-old game we’ve likely all played at some point growing up.

Usually the questions are something silly like “Would you rather go without TV or junk food for the rest of your life?” (I’ll keep my Cheez-Its, thanks) or “Would you rather meet the president or a movie star?” (Hi, George Clooney!).

But last week, we played an adult version of the popular game with our readers. We asked a question originally posed by The Wall Street Journal…

Would you rather receive $1 million upfront or $5,000 per month in retirement?

At first glance, you might go for the $1 million. But don’t be fooled – based on average annuity prices, the two options actually end up being equivalent. (This is assuming that monthly annuity payments, starting at 65 years old, are 1/200 of the lump sum and that life expectancy is about 80 years old.)

Overall, our results were split almost right down the middle. About half of our readers would take the $1 million, and the other half would go for the $5,000.

But then we broke it down further, by years of investing experience. And that’s where things got interesting…

Less experienced investors were more likely to grab the large lump sum. It could be because such a large number gives you a much-needed sense of security.

The problem arises when you wrongly believe that $1 million is worth more than $5,000 per month – and spend accordingly. It’s a lot of money, yes, but spread out over an entire retirement, it’s less than you think.

When you’re creating a budget or determining how much money you’ll need to retire, make sure you take into account how many years it will need to last and find ways to cut extraneous costs where you can.

On the other hand, more advanced investors tended to choose the $5,000 per month. According to The Wall Street Journal, this means you have an illusion of poverty. You are likely more conservative with your money, worried about making your nest egg last. A guaranteed stream of monthly payments sounds a lot better than just one sum.

If this is you, congrats on being a responsible spender – but keep in mind it’s okay to live a little too! Relax those purse strings every so often to enjoy the golden years you’ve worked so hard for. Stay on budget, of course, but don’t let money fears hold you back from life.

Obviously, your response should depend on a lot of factors. The more years you have left before retirement, the greater the chance you’ll want to take the $5,000 (it will end up being more than the $1 million, most likely). But if you are a smart investor, you might want the $1 million to put to work in the market immediately.

Basically, there’s no “right” answer for everyone.

Your turn! Which would you choose: $1 million upfront or $5,000 per month? Let us know in the comments.

What’s Your “Punched in the Mouth” Plan?