Are You Ready for 5G? How to Play the Coming Boom

Besides cannabis, the sector I’m most asked about is 5G.

So today, I’d like to offer Wealthy Retirement readers a glimpse at the top 10 companies at the leading edge of 5G development.

So let’s take a short look at the history of mobile phones to get a glimpse of why the next mobile generation is such a big deal.

From “The Brick” to Bluetooth

In the 1980s, they were the toys of the affluent – status symbols that retailed for thousands of dollars. Only movers and shakers had cellphones.

Most of us fondly remember Gordon Gekko’s Motorola DynaTAC 8000X, aka “The Brick,” in the 1987 film Wall Street.

If you don’t, you probably weren’t born yet.

Back then, the standard was 2G (second generation). And Motorola was the top handset maker, with a 70% market share by 1985.

Thousands of people were on waiting lists to buy the DynaTAC 8000X.

But it was a slow burn. It’s amazing to think just 2% of Americans had mobile phones by 1990.

Then, a decade later, everything began to change and accelerate. Wireless technology evolved, and the Europeans swooped in. The biggest handset makers were overseas as cellphones started on their path to ubiquity.

Of course, the world was transformed in 2007. Apple’s iPhone was introduced, and this torpedoed the once-fashionable Blackberry into obscurity.

“Smartphones” were born. No longer were we carrying around dumb bricks of plastic – even though they’d shrunk considerably from Gekko’s infamous beach walk.

Email, music, the internet and apps were suddenly available to everyone. And the cellular networks had to change… to become more robust.

We had 3G, 4G and then 4G LTE standards. And despite all that we do on our phones now… it’s not enough.

Our personal data demands are increasing exponentially as our smartphones serve as a tether to every aspect of our lives. The traffic generated by smartphones will increase 10 times over from 2016 to 2022.

From business to social media to wandering the internet in search of new cat videos or streaming our favorite programs through a wide variety of services.

But salvation is on the horizon in the form of the next network upgrade… 5G.

5G will advance connected vehicles (everything from cars to ships), the Internet of Things (IoT) and a whole host of other technologies we’ve been patiently waiting to become commonplace.

5G is that bridge. And we can’t evaluate who’s on the leading edge of this industry without examining which companies hold the most patents… 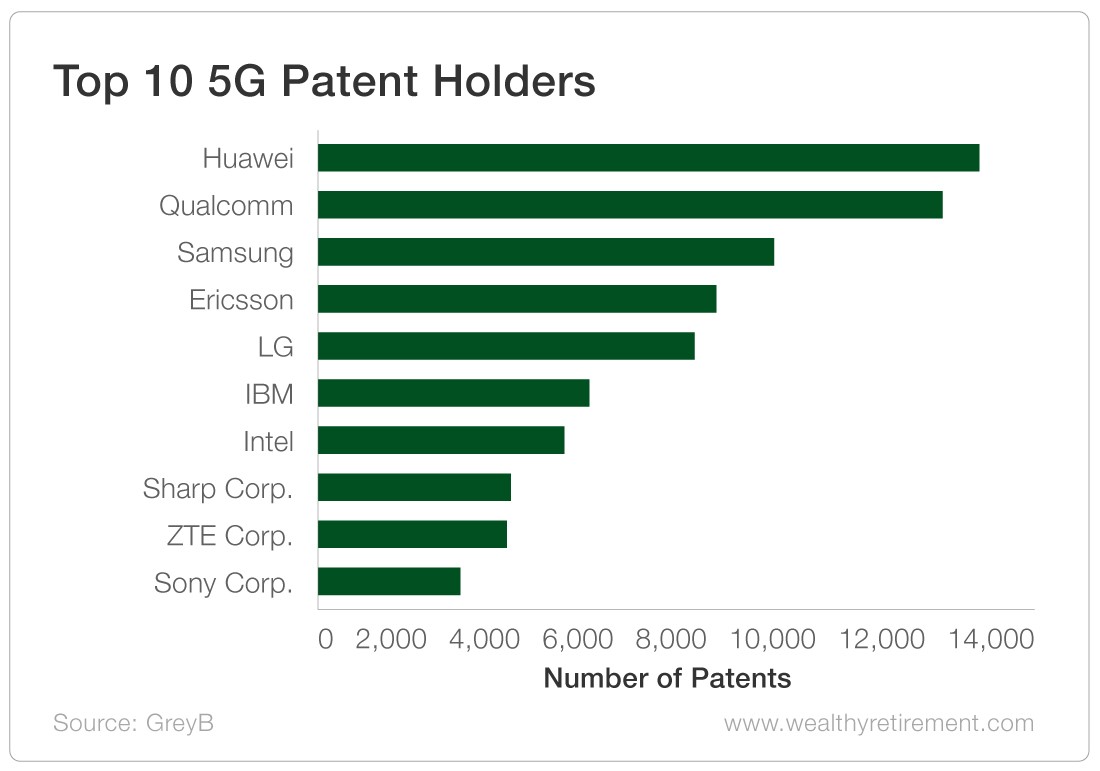 China and the U.S. are racing to be the leader in 5G. And at the company level, it’s a fairly tight race.

For now, China’s Huawei is edging out America’s Qualcomm (Nasdaq: QCOM) for the total number of 5G patents.

Though Huawei is in that No. 1 spot, it’s worth noting that the U.S. has more total 5G patents than China.

Of course, China and the U.S. aren’t the only players.

As the 5G market matures, these companies will be looking to weaponize their patent portfolios. (Though eagle-eyed investors will notice most of these companies are slow movers and shares are not easy for average investors to snag.)

At the moment, we’re at the dawn of the 5G revolution. We’ll see a more expansive rollout over the next couple of years.

The reality is, 5G is going to be magnitudes faster than the generations before it.

But – as with anything the world waits on with bated breath – 5G will be here sooner than you think.

A 20% Yield With a Good Chance of an Upgrade

The Only Two Things You Need to Know...

Why You Need a Little Real Estate

Undervalued U.S. Cannabis Operators Are on a Roll