The pain of the Great Recession is still fresh in many retirees’ minds. In just 517 days, investors saw their dreams of retirement dashed. The S&P 500 plunged 55% between October 2007 and March 2009.

When the dust settled and the stock market finally bottomed, U.S. retirement accounts had shed $2.7 trillion from their combined 2007 peak.

The pain didn’t stop there.

Home prices continued to plummet after the stock market rebounded, and the prolonged period of low interest rates devastated savers.

Although the Great Recession ended a decade ago and ushered in the longest bull market in history, many investors are still suffering from its ill effects.

Even though the S&P 500 is up 385% since March 2009, a recent Wealthy Retirement survey found that only one-half of respondents have fully recovered financially from the investment losses they sustained 10 years ago. 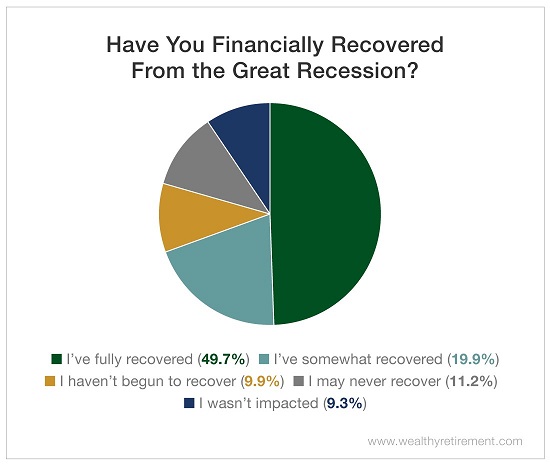 Despite the S&P’s red-hot run, our recent survey results get even more depressing. Nearly 10% of Wealthy Retirement readers surveyed said that they haven’t begun to recover from their losses. Worse, more than 11% said they might never recover.

So what happened? If the market is up 385%, how are at least 21% of Wealthy Retirement readers still in the red?

The most likely reason depends on their reaction to the crash. Many investors sold their holdings during the crash and never bought back in. They missed the market’s rebound that began in 2009.

A missed decade of wealth appreciation doesn’t bode well for their retirement savings. It’s a hard lesson to learn, and it’s one our readers are managing alone. The vast majority of respondents aren’t expecting to receive any outside help from an inheritance funding their post-work lifestyle.

Only 15.5% of respondents said they’re counting on or have received an inheritance to help fund their retirement. The vast amount of those surveyed, 84.5%, are not and have not. 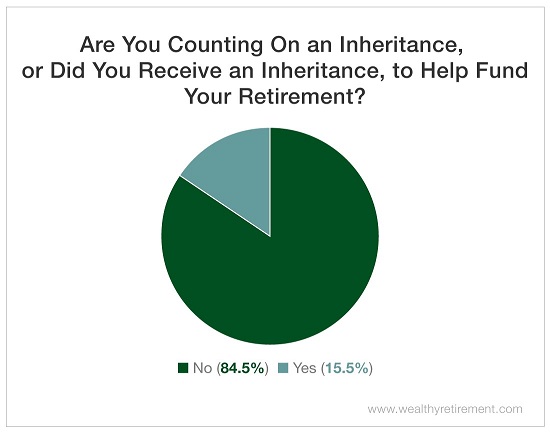 A lottery win can be life-changing too – but since so few of us can expect anyone to hand us “free money” for our retirements, it’s up to us to raise the money ourselves.

Dividend investing is the easiest way to make money. It’s also the most boring.

The strategy is simple… buy Perpetual Dividend Raisers and hold on to them for years regardless of which way the stock market and economy go.

Perpetual Dividend Raisers are stocks that raise their dividends every year. And as Wealthy Retirement’s Chief Income Strategist Marc Lichtenfeld has said, “They beat the pants off the broader market.”

If you go back to December 1989 when the index began trading, the outperformance is even better. Dividend Aristocrats have earned 2,583% versus 1,413% for the S&P.

That’s nearly double the performance of the S&P!

If you’re looking to make back your money or grow what you have today, remember: You have to be in it to win it. If you invest in Perpetual Dividend Raisers, you’ll have a larger nest egg tomorrow.

How to Play Innovation in the Energy Sector

You Can’t Collect It if You Don’t Protect...