Last year was a very good one for U.S. mergers and acquistions (M&A). In fact, many corporations went on a shopping spree.

Through the third quarter, M&A activity was up 30% to $1.67 trillion. It was the highest U.S. dollar value on record. Larger corporations shelled out more cash than ever to buy smaller companies.

This year’s M&A activity could be even bigger and more profitable for investors. The best part? You can capture some of these split-second M&A profits for yourself.

So why do acquitions happen?

Well, in many cases, it’s because bigger really is better, and the whole really is more than the sum of its parts. At least, that’s the theory behind M&A.

More than 39% said that companies acquire or agree to be acquired by other companies to take advantage of economies of scale and other integration synergies. In other words, it’s cheaper for the companies to operate together than to stay separated. 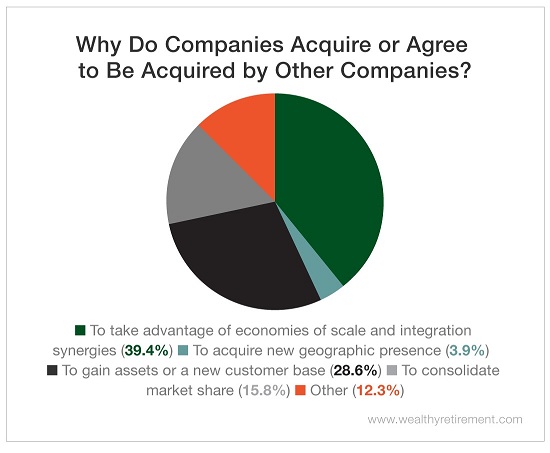 When do M&A events happen?

Often, companies buy other businesses when they’ve reached a mature stage in their life cycle. At this point, the core business’s growth slows significantly after a period of rapid expansion.

These mature companies are flush with cash, making it the perfect time to make their move. Buying a related or nonrelated business is a quick way to jump-start revenue and profit growth.

Of course, first the acquirer has to convince its target that it’s a good idea to be bought. The easiest and fastest way to do that is to pay a premium for the business.

This means that the acquirer will pay a higher price for the company’s shares than they’re currently trading for on the stock market. That premium is usually 20%, 30% or 40% more than the present share price. Some premiums run even higher.

Acquiring companies don’t have a problem paying rich premiums because they know that the synergies and cost savings created by combining the two companies will more than make up for the higher price. Offering a premium for shares is also a good strategy to ward off competing bids and close the deal quickly. 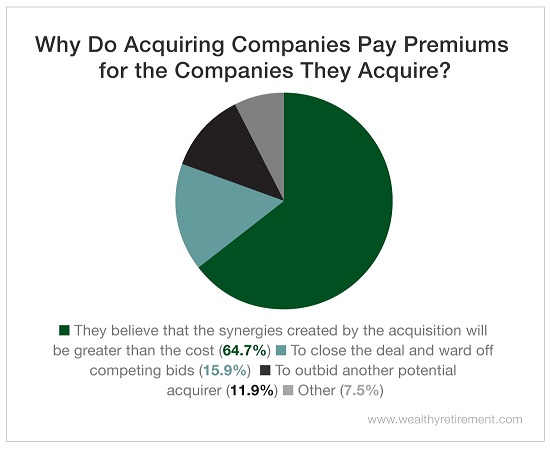 Shareholders of the target companies almost never complain about collecting these higher valuations for their shares, especially when they watch the price of their stock jump in less than 10 minutes.

Mergers and acquisitions are some of the fastest and most powerful wealth-building events in the market. But here’s the problem: If you don’t already own the stock before the acquisition is announced, it’s too late. It happens so quickly that you’ve already missed out on the profits.

How to Make Money From Mergers and Acquisitions: Part 1

How to Play Innovation in the Energy Sector