Home prices are above pre-crisis levels and the force pushing them to new highs is losing strength. The housing bubble chart below shows the jump in home prices… 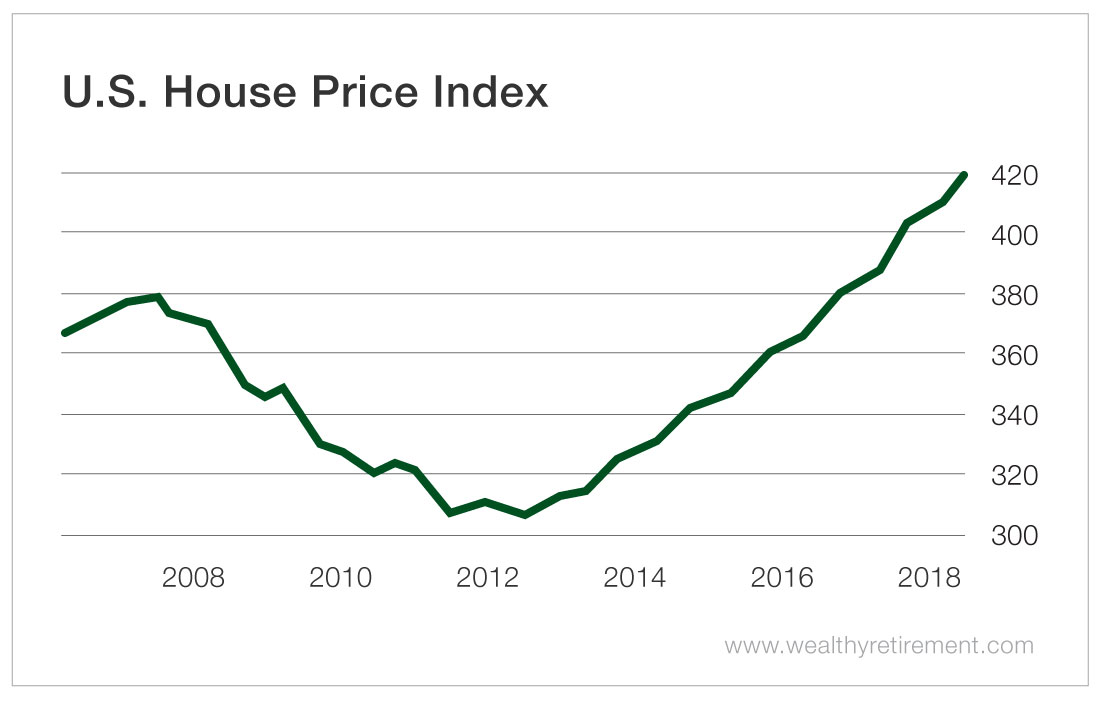 The next housing collapse is on the horizon. Eventually, home prices must return to normal levels. That’s why I’ve uncovered six ways to protect yourself and profit from the correction.

But first, let’s take a closer look at what’s behind the housing bubble 2.0.

It’s still one of the best times in U.S. history to borrow money.

The artificially low rates have prompted folks to borrow money to buy homes. The fear of rising rates is pushing a final buying spree. As interest rates continue to rise, borrowing becomes less attractive. That’s why mortgage brokers are encouraging homebuyers to lock in low rates.

A rock-bottom interest rate is the main culprit behind the housing bubble resurgence. It’s spurred sales and pushed home prices above pre-crisis levels. Although, the Fed has turned off the cheap money tap.

The new housing bubble won’t sustain as cheap debt disappears. Home buying demand will fade and this is just one reason to be cautious.

Lending standards are a little better today than they were in the early 2000s but they’re still not great. Lenders and brokers still have plenty of ways to pass the buck.

Mortgage brokers work on commission. Their job is to close sales, whether or not those sales are financially sound. When a broker sells a house, the mortgage on that house is often repackaged into a security with other mortgages. Then it’s sold to other investors. The risk is passed on to the next guy.

Another sign of the 2019 housing bubble is lower real median household income growth. It’s up less than 10% from its recent lows, while the home price index is up almost 25%. This divergence is unsustainable. If it continues, the average person won’t be able to afford a home in a few years.

Warning signs are now appearing and “For Sale” signs will likely follow. The housing bubble has blown above 2007 highs and a correction is around the corner.

The evidence of another collapse is piling up. This is why you should consider ways to protect yourself and profit from the next housing collapse.

Three Ways to Protect Yourself from the Next Housing Bubble Burst

Home prices will drop when the housing bubble bursts. This will send mortgage originators, home builders and insurance stocks plummeting.  Luckily, an investment strategy lets you profit as they fall. Investors call it short selling.

To short sell a stock, you borrow the shares from another investor. You then sell them right away at the market price… so you get cash but are obligated to return the shares you borrowed at a later date.

If the price of the stock drops, you can buy back the amount of shares you borrowed at a cheaper price. But as the price increases, you’re still obligated to return the same number of shares.

If Apple drops to $125 in a month and you want to close the trade, you’d buy the share for less and return it. You’d keep the difference of the $150 collected and the cost to return it of $125. You’d be up $25 and would no longer be obligated to return the share.

Short selling is a great technique to profit as stocks collapse. The following three housing stocks have lofty valuations that tie into the housing market.

The rate of mortgage defaults shot through the roof, and home prices tanked. The collapse wasn’t just on a local level but from coast to coast.

The housing collapse destroyed the savings of hardworking families… but a few folks who saw it coming coasted through it unscathed and profited along the way.

That’s why you should take action to protect yourself and profit. Don’t let market downturns stop you from retiring early.

Are you interested in finding out if you’re on track for retirement? Try our free retirement readiness calculator.

Don’t Fall for This Cyber-Swindle

A Lesson to Teach Your Kids… and Grandkids

The Most Important Investment Strategy

Combat Loneliness to Find Joy Over the Holidays