If you’re like me, once the Thanksgiving leftovers are put away, your thoughts immediately turn to preparing for the holiday season.

There’s a lot to be done before the celebrating begins. There are decorations to put up, desserts to bake and holiday parties to organize.

And don’t forget the most expensive and time-consuming holiday activity of all… shopping.

For most Americans, gift giving goes hand in hand with the end-of-the-year festivities. But all of the shopping and wrapping is enough to make even the most organized person’s head spin.

Don’t worry… retailers are here to help you spend your hard-earned money.

They kick off the annual shopping extravaganza the day after (or in some cases, the day of) Thanksgiving. Retailers lure consumers into their stores or onto their websites by offering steeply discounted merchandise.

We call the unofficial holiday “Black Friday” because it’s supposedly the first day of the year that many retail companies turn a profit.

I’ll admit it. I was one of the hordes of shoppers participating in this year’s Black Friday hoopla. Personally, I love the energy of the experience and the crowds. Plus, it’s always a great time to find a huge sale on an item or two that I’ve had my eye on for a friend or myself.

But here’s the thing, I always have 90% of my shopping done before my family carves the turkey.

I start planning for the holidays in September. By the time December rolls around, nearly all of my gifts are bought and paid for.

While Black Friday has come and gone, most Americans will keep on spending… even if that means shelling out money they don’t have.

Cyber Monday sales start in two days, and there will be dozens of sales tempting you to overspend after that.

Don’t do it. You don’t want to be paying for it for the better part of next year.

Unfortunately, the temptation of discounts is too great for many of us, and that’s exactly what happens. 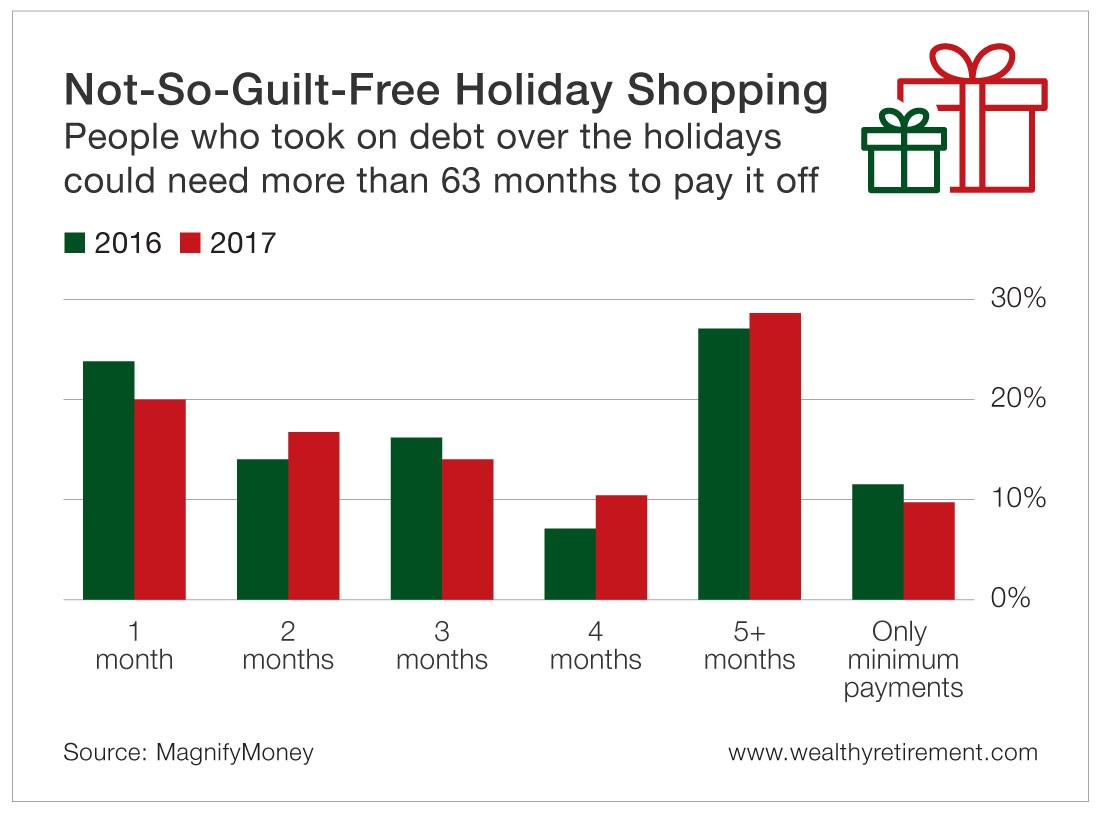 High-interest credit cards accounted for most of the debt last year. The average credit card interest rate is now 15.32%. So floating the extra dollars you spent on holiday joy is going to cost you even more.

Owing those extra dollars can hurt you long into the new year. It can be especially tough if you’re retired or living on a fixed income. By the time you recover from paying it all off, it’ll be the end of the year and the overspending will start all over again.

But the good news is that it doesn’t have to be that way. You still have time to stop the cycle of spending more than you have this year.

Here’s the thing about the most festive time of the year that people tend to forget: You have to budget for it.

Like retirement, you know that the holidays are coming. You also have a good idea of what you usually spend. Making a holiday budget is an easy way to attack overspending. But it works only if you stick to it.

It’s not just gifts you have to budget for. Decorations, cards, postage, travel and holiday foods all cost money too.

You’ll need to make lists of who and what you’re buying for and when.

Breaking down what you’ll buy each week also helps limit the temptation to spend more than you planned because you found a hot sale.

It’s better to give than receive… especially if you’re on the receiving end of credit card debt. Too many of us give and give until we have nothing left to spend.

Be proactive. Set your holiday budget today. If you follow it, I promise that your December will still be merry and bright and your 2019 will be an even happier new year.

How to Save Money on Travel in Retirement

Don’t Trust the Government With Your Retirement

How to Save Money on Airfare

International Travel Secrets That Could Save You Thousands