What to Expect in a Bear Market

Are we in a new bear market?

It’s the question on nearly every investor’s mind.

While the S&P 500 hasn’t officially entered bear market territory yet (which is defined as a 20% drop from the high), the majority of stocks are, in fact, in a bear market.

So how bad can it get? Let’s look at historical bear markets and see what the numbers look like.

They lasted an average of 26.9 months.

So if this bear were to be an average bear, we’d be in store for about two more years of rough times and another fall of 20% or so.

That’s not fun. Of course, there’s no guarantee that a bear market will be average. It could turn into something really nasty, or it could be fairly mild like the one in 1962 that lasted seven months and fell only 22.5%.

The good news is that the stock market goes up over the long term. Over the past century, there have been 11 bull markets, and they tend to last a long time: a few weeks shy of seven years, on average.

And the average bull market more than triples your money, rising 208.7%.

More good news – if you bought at the beginning of a bear market (the market high), rode it all the way down and held on through the ensuing bull market, you’d have made money every time except for the period of the Great Depression when stocks tanked 85%.

Through all bear markets and the following bull markets, you would have had 71% more money on average at the end of both periods. 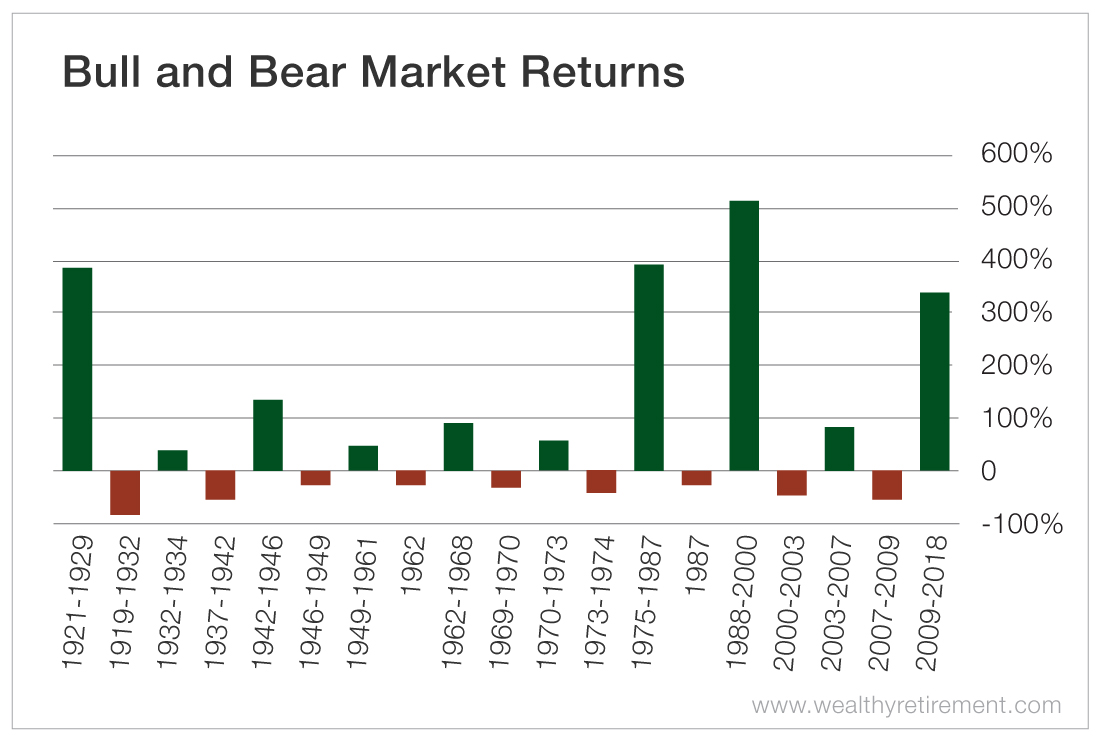 If you bought at the beginning of a bull market and sold at the bottom of the following bear, you made money seven out of 11 times. Even though you exited at the bottom and gave up your gains due to the bear market, your portfolio still ended up an average of 65% higher at the end of both periods.

So what do you do now if you’re worried about a bear market?

We know that the average bear lasts slightly longer than two years and falls an average of 40%, so if you need funds that are invested in the market in the next three years, take the money out now.

I give that advice regardless of what the market is doing because anything can happen in the short term. You can’t afford to have capital at risk that is needed to pay bills in the near term.

If you don’t need the money within a few years, I suggest keeping your funds invested, especially if you’re reinvesting dividends. Trying to time the market is impossible. We could drop another 20% or 50%, or stocks could turn around and fly 100% higher.

Remember that stocks go up over the long term, even if you ride out a bear market.

Bear markets are grueling to endure. They make you lose sleep. But if you remember that you usually come out ahead over the intermediate and certainly the long term, it will be easier to stomach.

I hope you have a wonderful Christmas and that 2019 is filled with health, wealth and laughter.

For a Healthy Retirement, Dream On

Don’t Hesitate When It Comes to Your Health

What Should Investors Do Today?