What’s Your “Punched in the Mouth” Plan?

“If the market is cut in half three years from now, could you take it on the chin?”

That’s the question I asked my cousin Dave, who requested investment advice last week. He wanted to know about different asset allocation strategies that were all heavily weighted toward stocks.

Dave is investing for years down the road, but he’s a worrier. I can talk all day long about how markets go up over the long term or about how – since 1937 – you would have made money 93% of the time over rolling 10-year periods. And that the only time you wouldn’t have made money over 10 years was if you sold during the depths of the Great Depression or Great Recession.

But none of that matters when your portfolio is down 30% because you’re in the middle of a bear market a few years after you’ve invested.

(Note: I’m not calling for a bear market in the next few years. I don’t have a crystal ball. I’m simply pointing out that bear markets happen and that one probably will occur at some point in the future.)

So I talked to Dave about investing in Perpetual Dividend Raisers (stocks that raise their dividends every year), index funds and actively managed mutual funds. I discussed the pros and cons of each, including managing the money himself versus turning it over to an advisor.

I encouraged Dave and his wife to have an honest conversation about what they would do if the market headed south. Otherwise, the fact that the S&P 500 has a 10-year average total return of 167% over the past 40 years will be meaningless, as they may not be able to handle the volatility.

If they are invested in the market without the proper risk tolerance and the market slides, they will no doubt sell into weakness, probably near the bottom like so many other investors.

When you hear about people who got their clocks cleaned in 2008, it’s usually because they panicked and sold. I’m not judging. The panic was understandable. We narrowly escaped financial Armageddon. And that’s not hyperbolic. The entire financial system was on the verge of collapse.

But investors who held on were made whole fairly quickly. Even if you bought at the very top in 2007, your portfolio was back to where it started by early 2013. 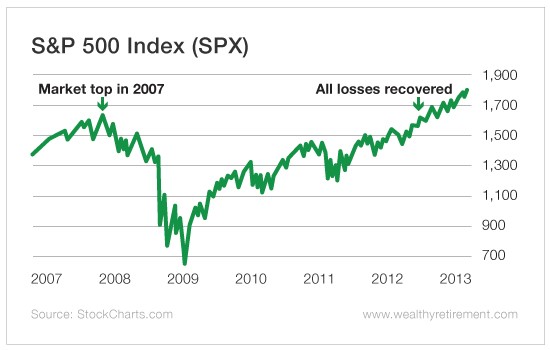 It’s easy to be rational when stocks are moving higher (as they are today) and say, “I’m in it for the long term.” But like Mike Tyson accurately stated, “Everyone has a plan until they get punched in the mouth.”

If the answer to any of those questions is no, get into safer assets like bonds, CDs and money market accounts today.

If a downturn wouldn’t have you up against the ropes, stay invested, confident in the knowledge that markets go up over the long term.

The Real Cost of Long-Term Care in Retirement

How to Manage Risk in Speculative Biotech Stocks

3 Secrets to Beating the Odds in a...

3 Questions to Ask Before the Next Bear...

The Easiest Way to Lose Money