written by Karim Rahemtulla Thursday, May 3, 2018

The other evening, I was having dinner with a good friend. He invited another friend along for the meal, someone I had never met.

As the evening progressed, she asked me what I did for a living. Not an unusual question by any means. I told her.

Her reaction surprised me.

She said she doesn’t like the stock market. It’s too hard to understand and too volatile. And the current levels scare her, especially after the crash in 2008 and 2009. In fact, she hasn’t invested in the market for a very long time.

I can certainly understand her fear. Almost everyone I know took a hit in 2008 and 2009. I can say the same for the dot-com collapse, the Long-Term Capital Management crisis and the crash of 1987 (Black Monday). I’ve seen a lot.

But while I can empathize with her, I don’t agree with her.

I don’t have a crystal ball for the future. And I really don’t need one. I can just look at the past and see how people have fared by investing in the market versus not investing at all.

Of course, I am generalizing here. I know a lot of people who have made a ton of money in their own business or in real estate, or even by buying Treasury bonds that pay 12% to 14% for 30 years.

And your timing would have been impeccable.

If you thought your house was the best investment, I’m sorry to disappoint you. Your house would have been worth about six times as much had you bought in 1980 and sold in 2016. Not a bad haul. But after adjusting for inflation, your real returns were only about 3% a year… 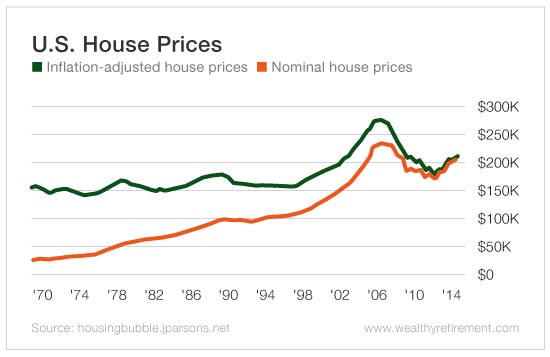 The point I’m trying to get across was that nothing really beats investing in the market.

It doesn’t really matter when you start as long as you don’t put a huge chunk in at the top of the market. But even then, you would still beat the pants off of just about every other investment except a hot collector car.

If you had invested at the peak of the stock market in 2007, you would have doubled your money by the beginning of 2018.

Sure, there are always going to be the special cases where people get lucky – and get rich – with something other than investing.

For example, starting a successful software company could have turned a few thousand dollars into more than $90 billion, as it did for Bill Gates. And plenty of YouTubers have made millions of dollars simply recording home videos.

But those are the exceptions, not the rule.

For the rest of us, ignoring the market is begging for a lifestyle that is much more limited than it could have been or could be going forward.

Take Advantage of the SPAC Crash

Expect a BIG Change From Berkshire Hathaway in...

The Perfect Time for Options