In fact, many newly retired people experience what’s known as a “spending surge” in their first few years after leaving the work world behind. And many of them aren’t prepared.

But here at Wealthy Retirement, we know how imperative it is to get a clear picture of how much you’ll need to live comfortably in retirement. That’s why we developed our Retirement Readiness Calculator.

This tool is free and takes less than five minutes to use. Take a moment today and give it a shot – and don’t let early retirement spending surges catch you by surprise.

If you’re retired, or planning for it, you’ve probably heard of the 4% rule. It has been a key part of retirement planning since the 1990s.

The big idea: Withdrawing a maximum of 4% of retirement assets per year guarantees most people will not outlive their money.

The 4% rule assumed people would not be retired for more than 33 years, and it was based on a study of stock and bond returns from 1926 to 1976.

The “beauty” of the system was that the 4% number meant people could keep up with inflation without eating into their principal. Most of that 4% was produced by dividends and Treasury coupons.

Now, you’re probably already seeing some issues with this rule:

More importantly, perhaps, the 4% rule was designed to provide a consistent stream of income in retirement. But the reality is that most people’s retirement spending is neither consistent nor steady.

This landmark study found the conventional wisdom about “constant spending” in retirement is wrong.

In fact, there’s “a high degree of retirement spending volatility.” Typically, this takes the form of a “spending surge” right before and immediately after retirement. 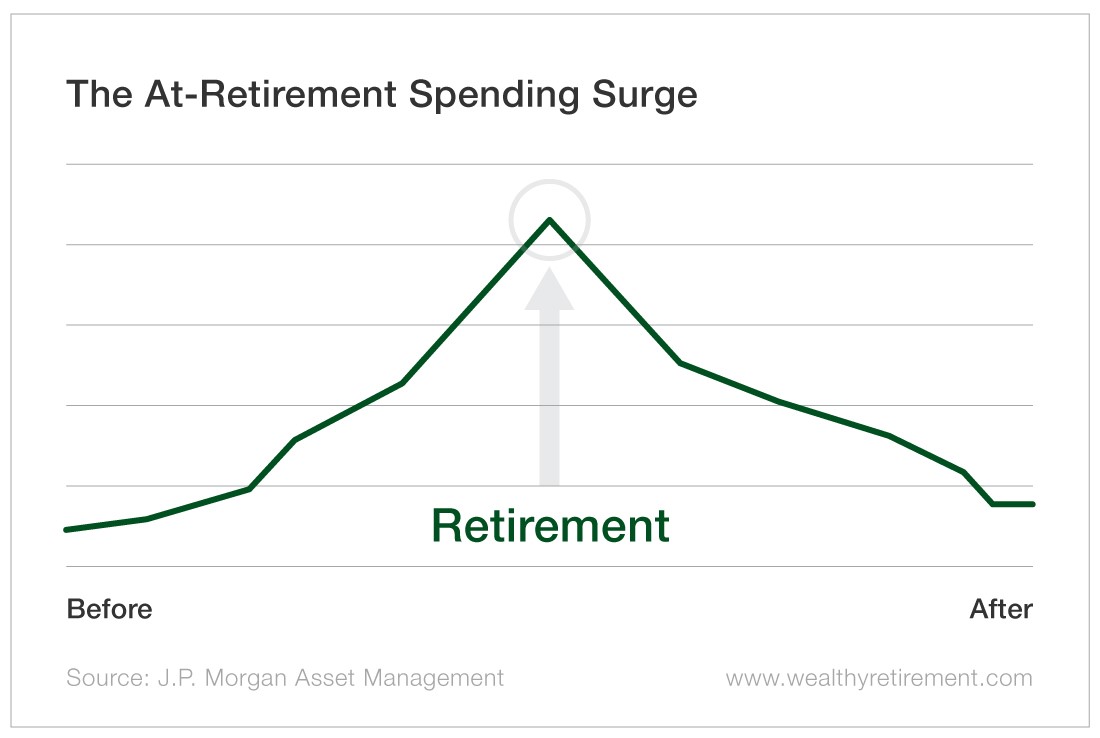 This “surge” is often the result of the expenses involved with moving, such as getting a house ready for sale and the purchase of a new residence.

Just before retirement is also when people often choose to get surgery, like a knee or hip replacement. And newly retired people are often the ones to take that “big trip” people have been waiting a lifetime to take – think African safari or riding a modern version of the Orient Express.

Unfortunately, the 4% rule – and conventional wisdom about saving for retirement – isn’t built to address the reality of how people really act (and spend) in retirement.

Now, I know what you’re thinking: Why focus on this surge? People are living longer, and healthcare costs are surging. So aren’t we going to need more (and more) as time goes on in retirement?

Again, J.P. Morgan found the reality is different from our preconceived notions. While spending on healthcare does rise as we age, that spending is “more than offset” by declines in every other category.

Think about it: The older we get, the less we consume and the less we need. An aging relative once declared she didn’t want any presents she couldn’t eat or read.

Also, most people don’t need long-term care for more than a few months. Again, there are exceptions, and healthcare costs can be astronomical if there’s prolonged illness. But J.P. Morgan found that while there’s usually a big spike in end-of-life medical care, it typically doesn’t last long.

And then… well, then you’re really not going to be spending money.

I’m certainly not recommending anyone “save less,” nor am I encouraging you to go on a spending spree in the early days of retirement. Many of us are drastically underprepared for retirement as it is. And everyone’s retirement needs and goals are different.

But rather than keeping your eyes only “on the horizon” and assuming you’ll have a frugal first few retired years to make the money stretch… make sure you’re prepared for a surge in spending. It’s completely normal and not a problem – as long as you know it’s coming.

The point is that there is no one-size-fits-all rule for retirement… nor is there one for pretty much anything else these days. Find a plan that works for you.

The Only TRUE Market Conspiracy Theory

Too Much Cash Could Hurt Your Retirement Savings

A Rude Awakening for Boomers

How Healthy Adventure Can Build a Wealthy Retirement