More than 130 years ago, Sunoco LP (NYSE: SUN) got its start as a small oil company in Pittsburgh, Pennsylvania. Today, it is the largest fuel distributor in the United States.

The stock pays a quarterly distribution of $0.8255 per unit, or 10% annually. As a partnership, the company pays a distribution – not a dividend – and the ownership stakes are called units, not shares.

That double-digit yield likely makes income investors salivate, especially considering the company is not some unknown or speculative name. It’s been around for more than a century, after all.

It has also paid a distribution every year since 2012.

Sunoco consistently raised the distribution every quarter until it hit $0.8255 per unit in November 2016, where it has remained since. It has never cut the distribution.

Can it continue to afford the strong yield it is paying investors?

For partnerships, we look at cash available for distribution (CAD) as a measure of cash flow. Last year saw a big bump in CAD for Sunoco to $517 million from $453 million.

This year, however, that number is forecast to drop to $443 million – the company’s lowest CAD in years. 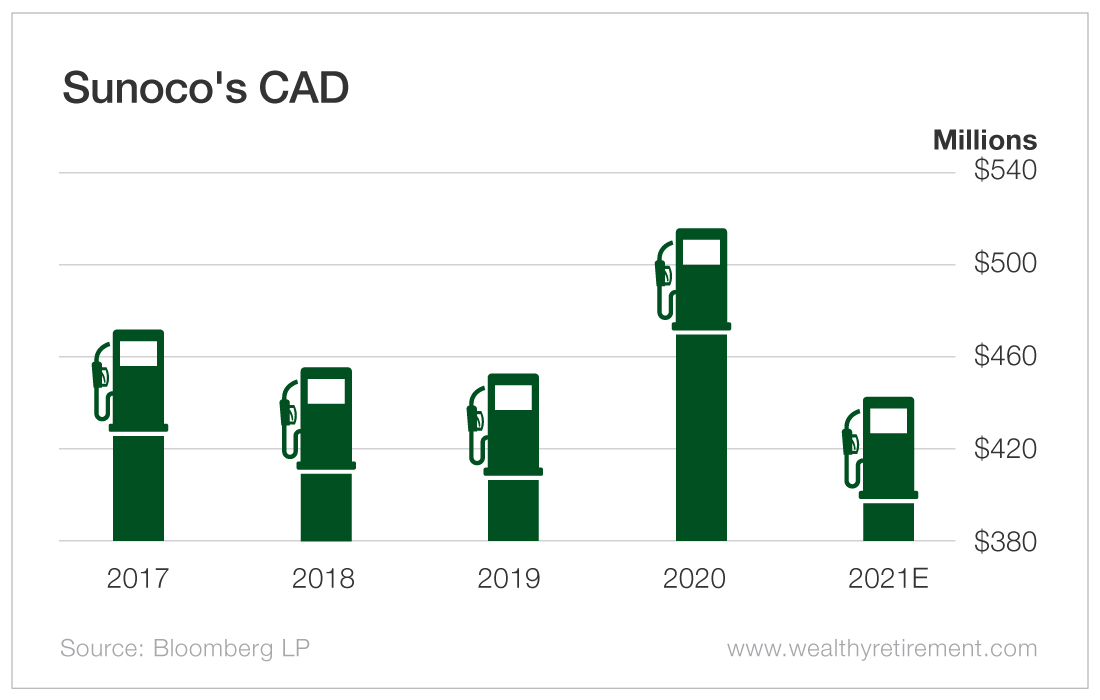 The biggest sin a company can commit in SafetyNet Pro‘s eyes is having declining cash flow.

So the fact that this year’s number is expected to go lower means the dividend safety rating will certainly be penalized despite Sunoco’s solid track record of paying the distribution without cuts over the past nine-plus years.

Debt is also too high. Its debt-to-EBITDA (earnings before interest, taxes, depreciation and amortization) is 5.8. However, with the company intent on paying down debt, that number is forecast to be lower in 2021.

When a company’s debt is too high, it means more of its cash is being used to pay down interest, which lowers cash flow. So the lower the debt, the better when it comes to distributions.

Some good news is that despite the lower-than-expected cash flow, Sunoco can still afford its distribution.

Last year, the payout ratio based on CAD was 68%. This year, that number is expected to rise to 79%, which is still fine. As long as a partnership is not paying more than 100% of its cash flow to investors, it’s not a problem.

I don’t expect a cut to Sunoco’s distribution in the immediate future. But that declining CAD is something to keep an eye on.

If it does come in significantly lower than last year’s and if later in the year it’s determined that cash flow will fall again in 2022, the company may have to consider reducing the distribution.

For now, the risk of a distribution cut is moderate.

A 9.8% Yield That Remains Safe