My teenage daughter embarrasses easily. If I’m talking too loudly, gesturing a little too dramatically or… breathing, she wants to crawl under a rock.

Like many girls her age, she spends most of her time in her room.

So I was pleasantly surprised last week when she announced that she wanted to watch the Macy’s (NYSE: M) Thanksgiving Day Parade together like we have every year since she was very little.

The parade has been held in New York City every year since 1924, and we’ve been watching it curled up on the couch since she was 4.

This year, due to high winds, the balloons had to fly much lower than normal.

This was an appropriate metaphor for Macy’s financial performance.

My daughter asked how Macy’s can afford to pay for the parade. Like the Grinch analyst that I am, I stated, “I’m not sure that it can. Macy’s cash flow is way down this year.”

While my daughter shook off the fact that, like a needle to the astronaut Snoopy balloon, I had potentially popped her dreams of continued Thanksgiving traditions, I began to wonder…

If Macy’s couldn’t afford to pay for the parade, would it also leave shareholders out in the cold when it came to its dividend?

Macy’s pays a sky-high 9.9% yield thanks to a nearly 75% decline in stock price over the past four years.

The retailer has paid a dividend since 2003, cutting it in 2009 during the Great Recession. It raised the dividend every year between 2011 and 2016, and it’s been frozen at the same level ever since.

Except for last year when sales were flat, Macy’s revenue has been slowly eroding, slipping since 2015 to around $24.3 billion in 2019. 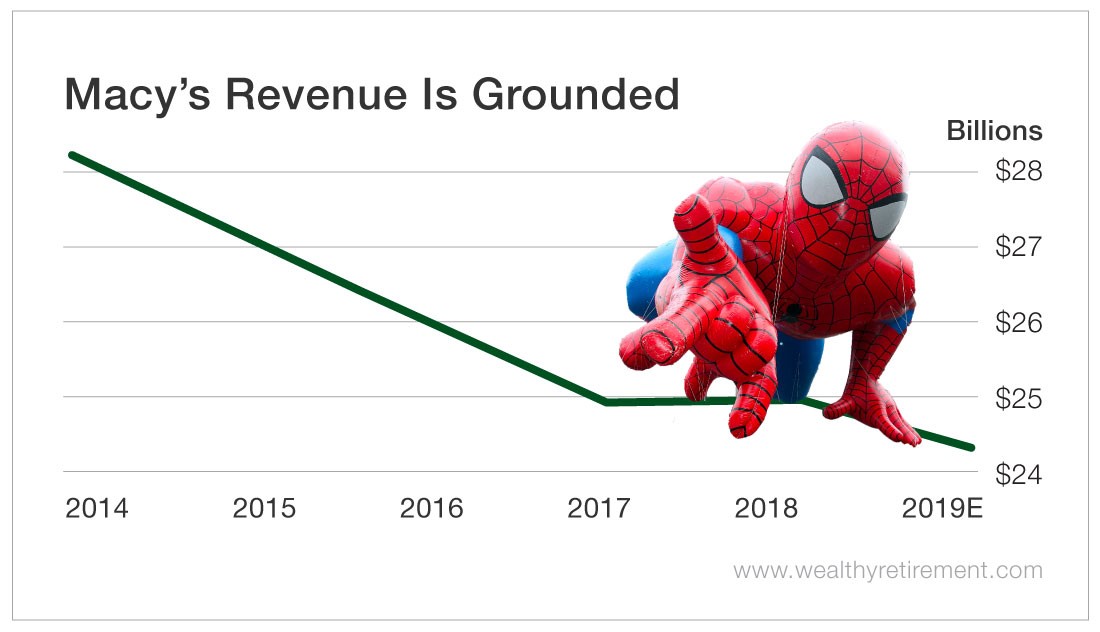 About the only positive news is the company’s payout ratio. Macy’s paid out just $463 million in dividends for a low payout ratio of 36%.

Its payout ratio is low enough that it should be able to support its dividend in the immediate future. And importantly – the parade.

But if sales and free cash flow continue to decline, Macy’s may have to rethink its dividend policy, especially considering that the yield is so high.

If you have a company whose dividend safety you’d like me to analyze, leave the ticker symbol in the comments section.

A Drug Giant Whose Dividend Safety Isn’t as...

Is This 2.5% Yielder Still a Golden Goose?