In March, I told you Bitcoin’s dirty little secret: that the digital currency is terrible for the environment.

I also suggested that this dirty secret could be what ultimately causes the undoing of Bitcoin and a sudden collapse in its price.

Bitcoin suddenly crashed, and this dirty little secret was the cause! 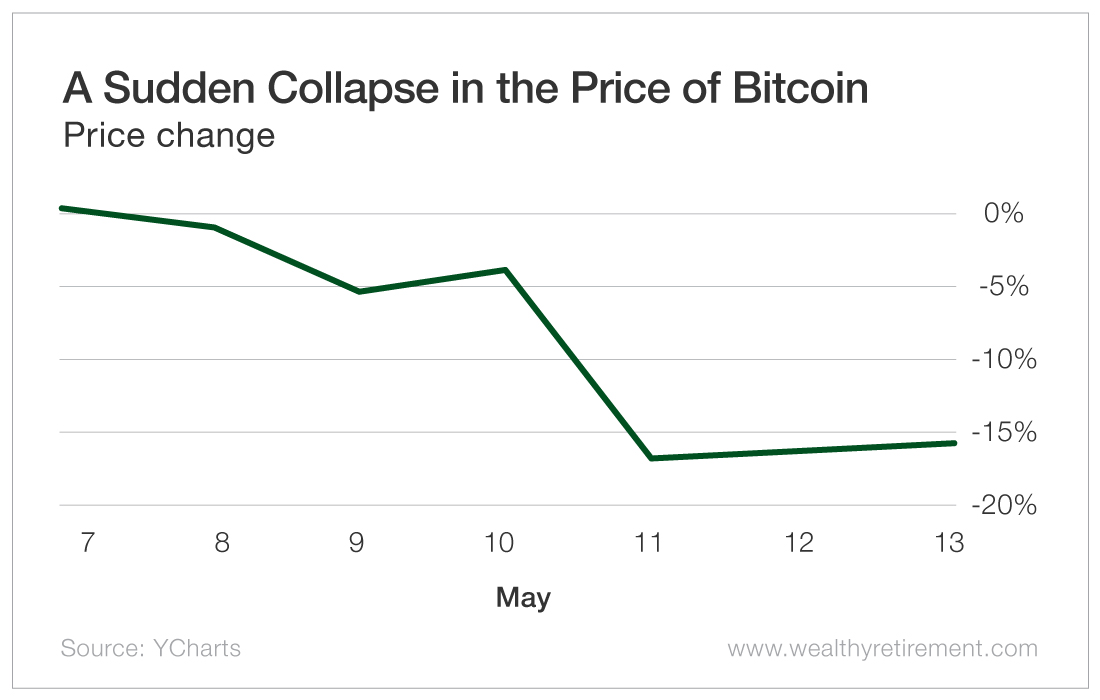 The amount of energy required for Bitcoin mining is simply mind-boggling.

Cambridge University estimates that Bitcoin mining already uses more energy than 159 of the 195 countries in the world each use.

That means, all by itself, Bitcoin mining is undoing the energy conservation efforts of billions of people.

How can the world truly “go green” with Bitcoin sucking up so much energy?

And if Bitcoin continues to grow in popularity, that energy consumption will only grow.

I think that is a major problem, one that is more than big enough to sink Bitcoin permanently.

Apparently, Tesla‘s (Nasdaq: TSLA) Elon Musk now agrees with me. He just did a sudden reversal on what had previously been his very high-profile support for Bitcoin.

Back in February, Musk had been a major positive catalyst for Bitcoin. He announced that Tesla had bought $1.5 billion worth of Bitcoin and that the company would start accepting Bitcoin as a payment method for its products.

With Musk and Tesla validating the cryptocurrency, the Bitcoin bulls felt that a huge step toward gaining widespread acceptance had been achieved.

But just a couple of months later, Musk has had a complete change of heart and is backing away from Bitcoin.

Tesla has suspended vehicle purchases using Bitcoin. We are concerned about rapidly increasing use of fossil fuels for Bitcoin mining and transactions, especially coal, which has the worst emissions of any fuel.

Cryptocurrency is a good idea on many levels, and we believe it has a promising future, but this cannot come at great cost to the environment.

Musk’s reversal stunned the crypto market and caused an immediate 17% drop in the price of Bitcoin.

Musk did indicate that he doesn’t intend for Tesla to sell any of the Bitcoin that it currently holds and that he would be willing to accept Bitcoin if its mining were to become more sustainable.

But with Bitcoin miners being a completely unregulated, off-the-radar group, I don’t know how Bitcoin mining could ever make the claim of sustainable energy use.

That would mean that Tesla isn’t going to accept Bitcoin again anytime in the near future if Musk keeps to his word (which is no certainty).

Instead, Musk said he plans to have Tesla look at other cryptocurrencies that use less than 1% of Bitcoin’s energy per transaction.

Stay Away From Bitcoin, Tesla and Dogecoin

My opinion when I wrote to you back in March was that trading cryptocurrencies is speculation.

While I don’t participate, I’ll admit to enjoying watching the action.

However, as I’ve written several times before, I find Tesla to be equally speculative.

I called Tesla the most overvalued stock I’ve ever seen – and I stand by that.

Tesla still hasn’t actually made any money selling electric vehicles. All of the company’s earnings are still tied to selling environmental credits.

We don’t know whether this company with a massive $500 billion market valuation will ever make any money.

To come full circle, Musk has now been tweeting bullish things about the cryptocurrency Dogecoin.

Earlier this month, I explained how Dogecoin was literally created as a joke. The founder of the cryptocurrency never believed it was anything more than a spoof.

Now, with Musk getting interested in Dogecoin, it looks like there is more Tesla and cryptocurrency fun to come!

I look forward to watching, but I won’t be risking my money on Tesla or any cryptocurrency.