Where All the Tax Cut Money Is REALLY Going 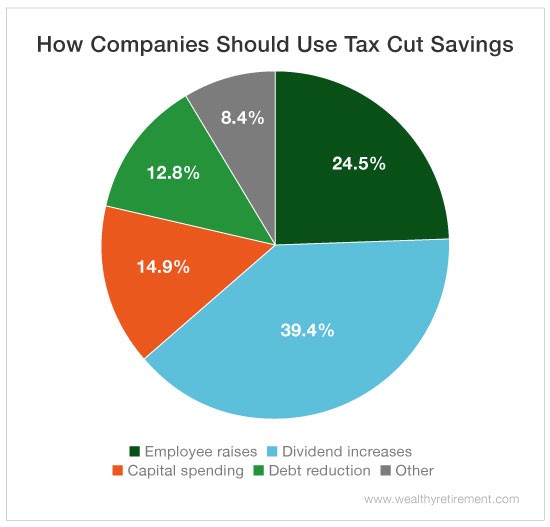 Go on a European holiday.

Build my dream house somewhere on the beach.

Donate a chunk to the Wounded Warrior Project.

Unfortunately, the chances of me – or you – receiving that much money are pretty slim.

But that’s the amount that American companies will be handed as a result of President Trump’s tax cuts.

So the big question they all face is “What now?”

Since the No. 1 priority of any company should be to make the shareholders (aka people like you and me) happy, we asked what YOU thought they should do with all that money.

Not surprisingly, the majority of you would like to see dividend increases. After all, those would put more cash in your own wallet. Employee raises and benefits took second place, which, again, is an immediate benefit for the average person in corporate America.

Fortunately, it seems like companies are listening to what we want. Or at least, they are in agreement when it comes to where that money is going.

According to a Morgan Stanley survey, 43% of the tax savings are being spent on dividend hikes and stock buybacks, which are both wins for shareholders. And while only 13% is going toward employee welfare through bonuses, healthcare and paid leave time, that’s still something to celebrate for the 3.5 million American workers who will benefit.

Even if you don’t feel a direct impact from the tax cuts, take a step back and look at the bigger picture: A lower corporate tax rate is better for businesses.

That’s something I think we can all support – especially since those of you who marked “other” want increased investment in infrastructure, more hiring and a focus on training workers here in the States instead of outsourcing overseas.

Hopefully the corporate tax cuts will be more than just quick cash for companies. We’d like to see it be a solid start to encouraging more jobs and economic growth right here in the United States and, well, making America great again.

How to Avoid Being Ripped Off in the Options Market

4 Easy Ways to Save Money on Healthcare