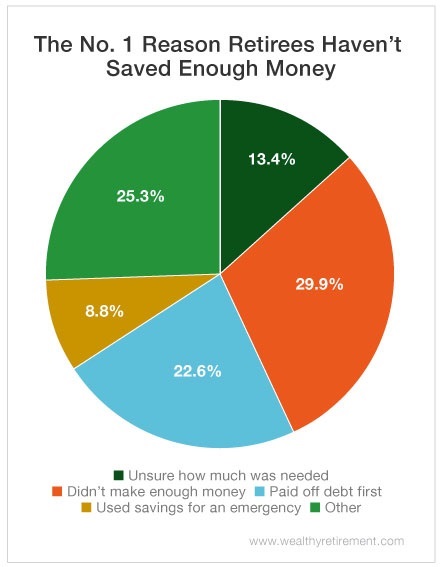 We all know we need to save for retirement. Yet according to the latest studies and reports, very few of us actually have enough stashed away.

In fact, 1 in 3 Americans have nothing saved… at all.

As with most things in life, saving for retirement is easier said than done.

We often blame that on too many people living beyond their means or spending irresponsibly.

“If only more Americans would stop blowing their paychecks on over-the-top vacations and new golf clubs, they would be more prepared,” we scoff.

And while that may certainly be true (after all, the less you spend, the more you can save), it’s not the primary cause of an insufficient nest egg, according to our research.

The No. 1 reason our readers don’t have enough saved is that they don’t make enough money to pay the bills, live comfortably AND stash a significant amount away. Only 19% of workers in the U.S. feel that they are paid fairly at their job.

And unfortunately, with the cost of living on the rise in many cities across the country, that gap is continuing to widen. Last year, for example, house prices increased at more than double the rate of wage growth.

But a earning a too-small salary – plus paying off debt and covering emergencies – isn’t the only reason for a lack of savings.

There were three common themes among those who marked “Other.” People either put supporting their kids first (hello, college tuition!), hadn’t started saving early enough or just weren’t sure of the right way to invest.

Regardless of why you aren’t where you want to be financially, don’t give up just yet.

Even if you’re already retired and even if your nest egg is almost nonexistent, there are plenty of ways to boost your funds and generate more income.

Saving doesn’t have to be hard. Do it the right way, and it’ll make your future much easier.

Unless you’re one of the readers who blamed their wife for their lack of savings. Best of luck with that one…

The Hidden Opportunities Your Broker Isn’t Telling You About

The Most Important Investment Strategy

How to Sell Your House for a Profit

Why Seniors Refuse to Loosen the Purse Strings

“Leasing a Car Is Only for Young People”

Is Your Financial Advisor Acting in Your Best...